Bert Archer: This is why I travel

The ship was only going to be in port for half an hour, but when was I going to be back in Sandnessjoen?

So I walked down the gang plank and into town, past the stout, gun-metal grey statues of powerful 9th-century woman Sigrid pa Sandnes and Norway’s 17th-century poet of the north, Petter Dass, to Torolv Kveldulvsons Street and into a house decorated like an ochre sheet cake with a shingle hanging out front that said “Scandinavie Café.” 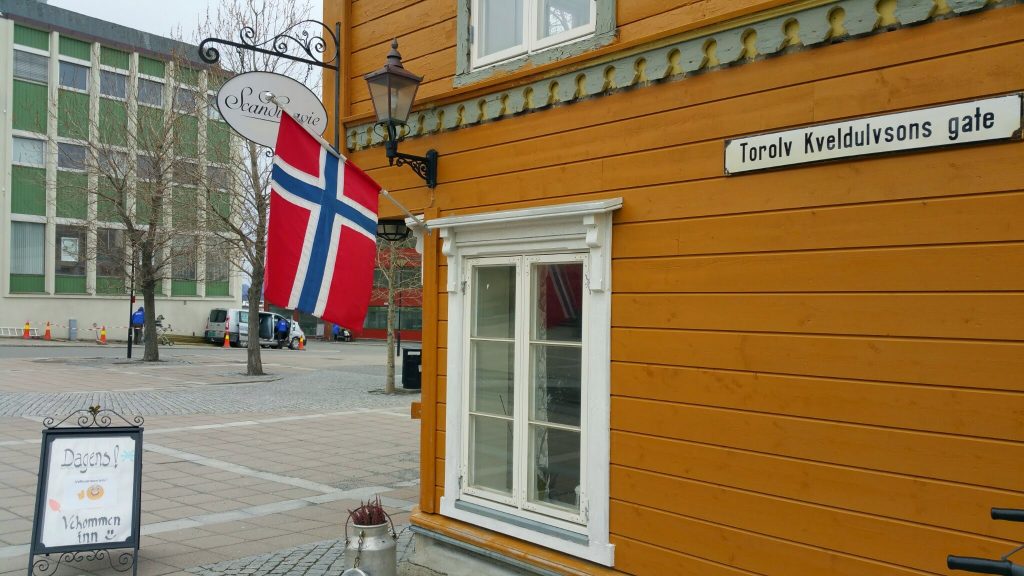 Inside were simple wooden chairs upholstered with decorative nails, and not-at-all simple wooden tables with big bulbous ornaments on the legs, covered in white lace tablecloths. The average age of the people sitting at the tables was roughly 65, sat in groups of two or three.

A ripple of silence went through the places as conversations were briefly interrupted as face after face rose and turned and looked at me, clearly the only non-Sandnessjoenian in the gorgeously understated 18th-century room.

This was a small town after all, the population slightly under 6,000, connected by the Helgeland Bridge and a few ferries to the 630km County Road 17, midway between Tromso and Trondheim and close to nothing. 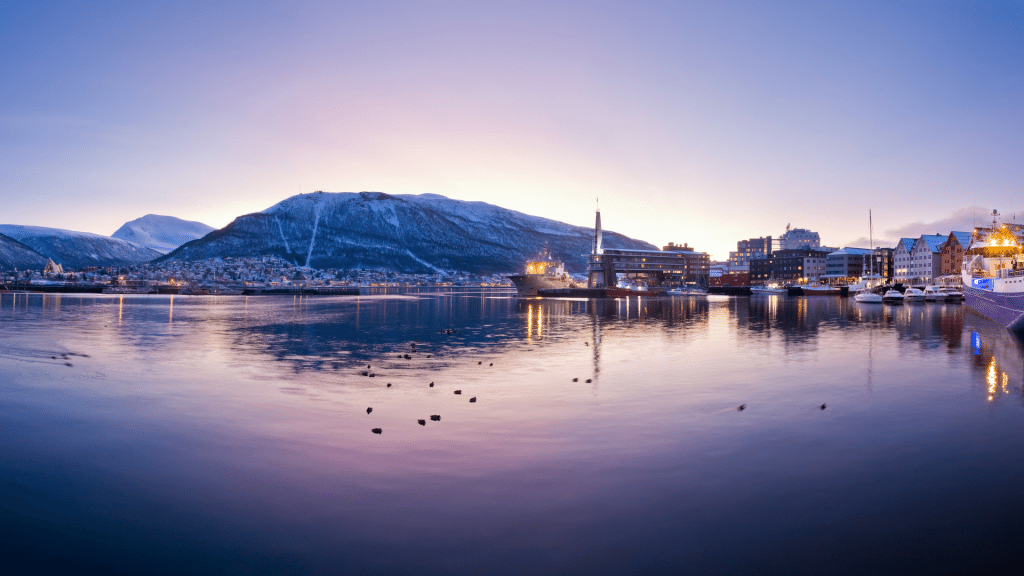 The harbour in Tromso, Norway

Not a lot of tourism, and probably not a lot of people who stopped in from the Hurtigruten, the shipping line that’s plied the Norwegian coast for the past 124 years; a half hour’s cutting it a little tight, even for cake and coffee.

The faces turned back to their conversations, I ordered a slice of apple cake, a cup of coffee, and read about 10 minutes worth of Karl Ove Knausgaard on my Kindle before paying the bill and strolling back to the ship just as they were calling all aboard and the Midnatsol continued southwards. 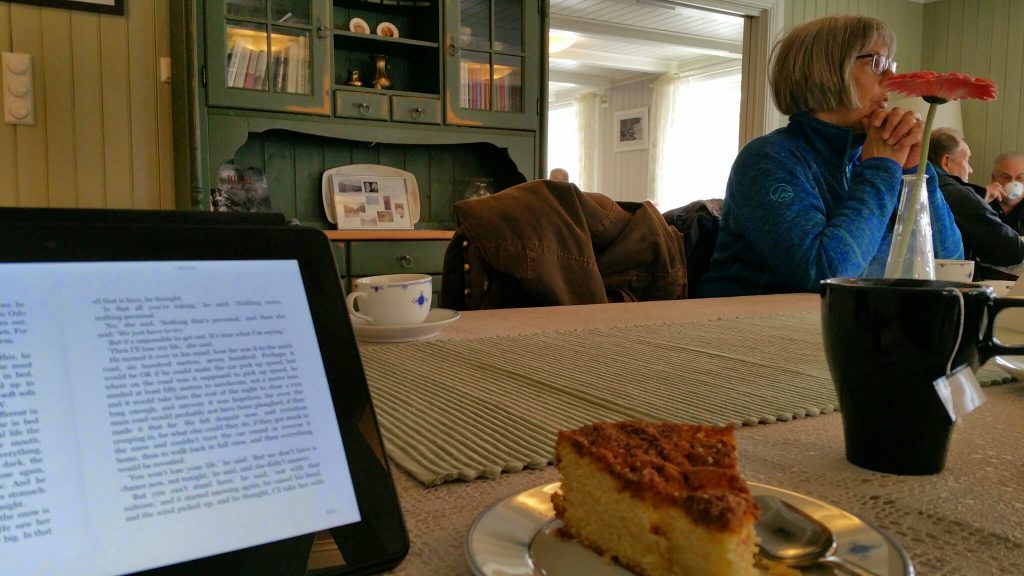 The apple cake in its final moments

I’ve been to 73 countries, hundreds of cities and towns, but these 30 minutes in Sandnessjoen encapsulate the basic travel experience I’m looking for, and getting, every time I board a ship, raise the seat tray in front of me, or put on those hilarious 70s headphones they make you wear in helicopters.

The Scandinavie isn’t a drop-in like a Second Cup, a place to indulge like the Café Götze in Bregenz.

It’s not a place to read for a whole day like Café Reggio on Manhattan’s McDougall Street or people-watch like any given sidewalk café in Budapest, Buenos Aires, or Sofia. 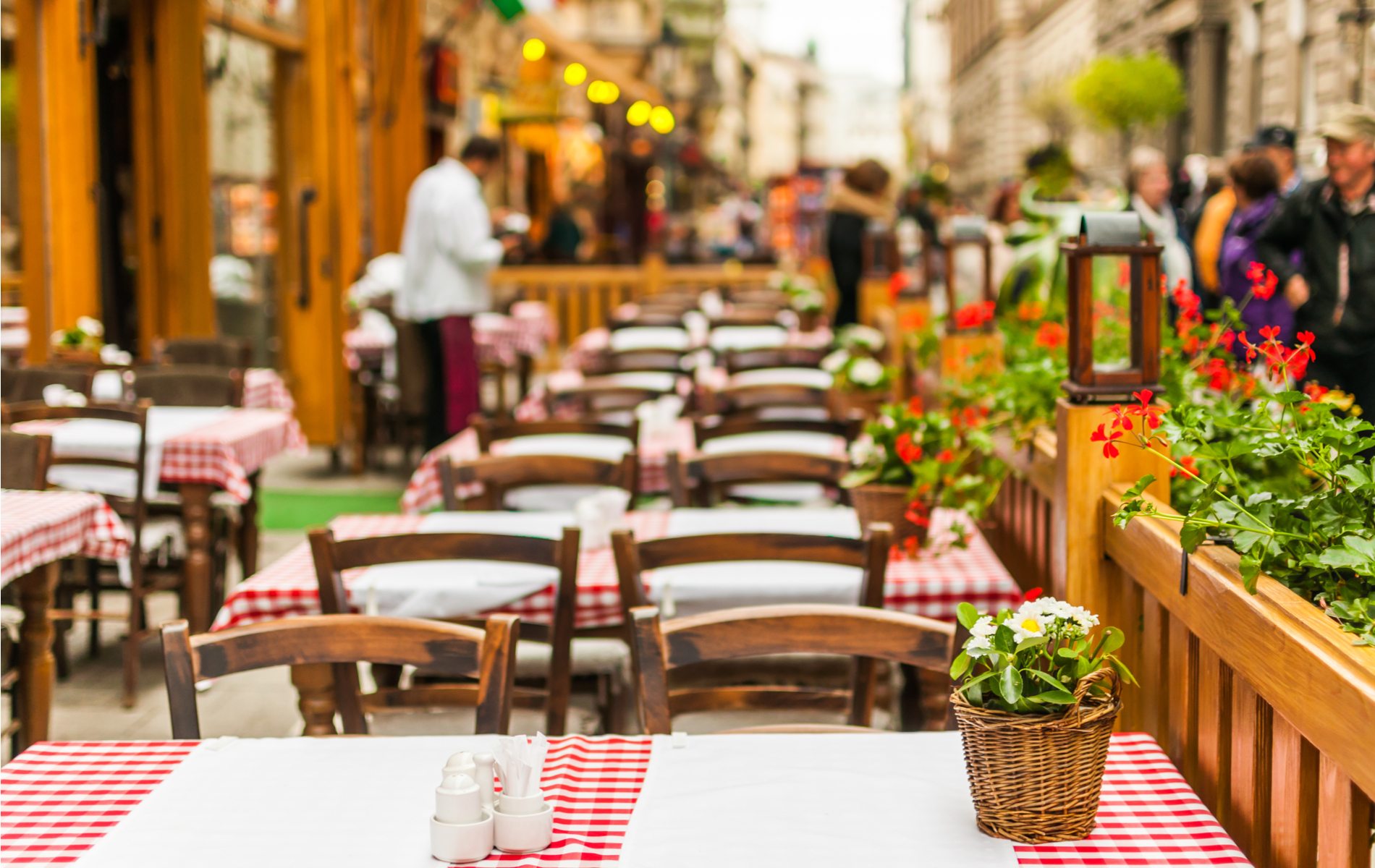 The Scandinavie seemed, even after a few minutes, like a place people met people they already knew, a living room for the town, where you can entertain and be entertained by friends without having to tidy up beforehand.

I’ve been in probably hundreds of cafes in scores of countries, but I’d not been in that kind before. It hadn’t even occurred to me that a café could serve that sort of purpose. But it makes perfect sense, now that I’ve been there.

Despite a 24-hour news cycle, social media that keeps us connected with people all over the world, and webcams that let us check in on how the Eiffel Tower or Victoria Falls are doing while we eat our spring rolls in the food court, the thing you can’t get from afar is how life feels someplace else. 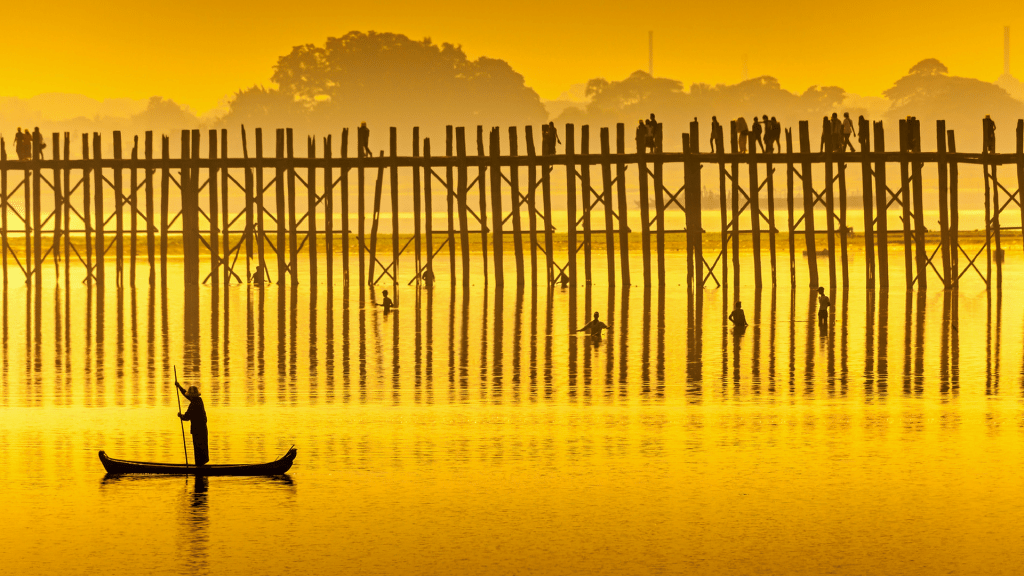 U Bein Bridge at sunset, Myanmar

It’s going on, every minute, everywhere, and despite Marshall McLuhan’s notion that we live in a global village, life feels different elsewhere, and the only way to see it, to feel it, to make a stab at understanding it, is to travel.

Sitting on a front porch in Arusha, passing around a bucket of millet beer, gulping, wordless though everyone speaks English;

– talking to a smart, strong woman in northern Peru about her firm belief in the existence of a mermaid and her anaconda bodyguard in a nearby body of water while she pours out small glasses of aguardiente she’s made in the back of her shop, an hour’s dense forest walk from anywhere;

– swapping stories about Seattle bartenders in a dark 7th-storey Tokyo bar that seats 10 but somehow stocks a local Rotterdam gin; 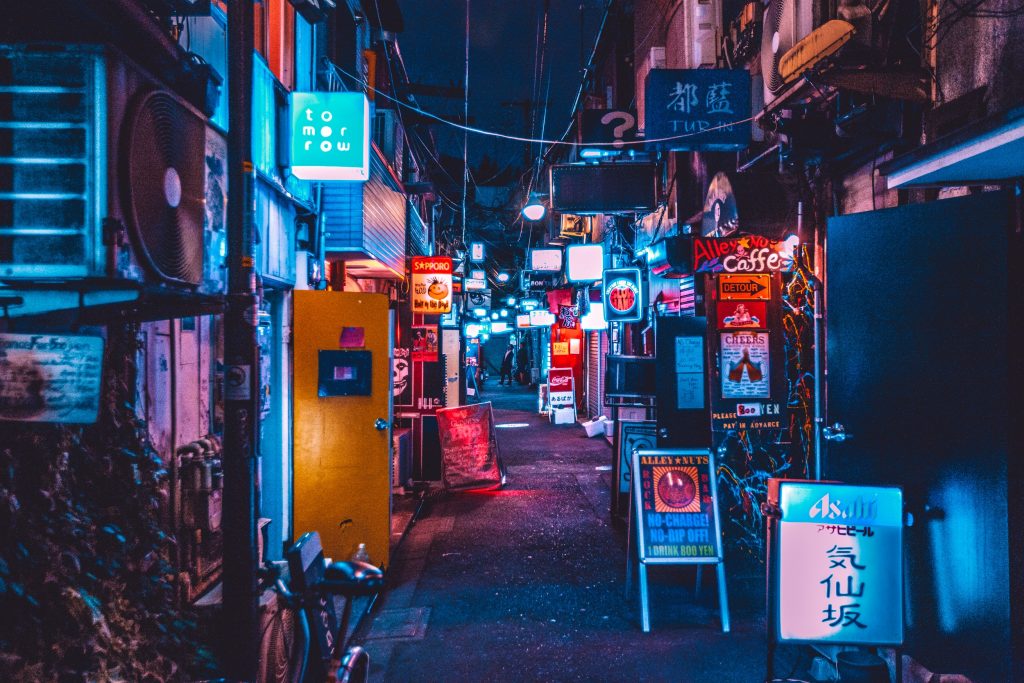 – discussing the effect English is having on new novels with the fiction librarian at the main branch in Reykjavik – these all feel different, and all offer slices of insight, shards of windows onto the way people serve food, shake hands, and laugh.

How are you going to know what the light looks as it rises behind the towers of Shinjuku and sets amid the live oak of the South Carolina Lowcountry unless you go? 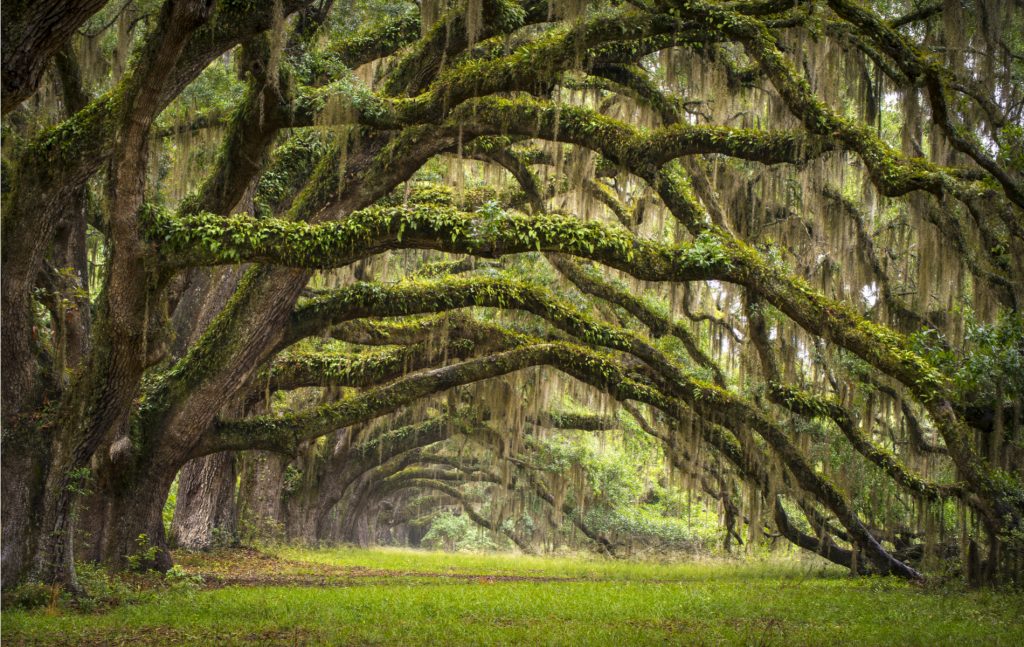 I’ve seen gorgeous pictures of the Northern Lights that make them look more spectacular than they ever do in real life, but a night I drove 45 minutes out of Akureyri in northern Iceland and lay on my back on a dirt road in complete darkness as the aurora borealis revealed itself, slowly, coyly, green tendrils unfolding slowly across a star-spangled sky is more memorable, more affecting, than any well edited Instagram.

Travelling can be like passing through a membrane into a place where we’re more sensitive to revelation, inspiration, and moments of simple or complicated beauty. Most travellers have at least a couple.

Wheel & Anchor is a community of people who are passionate about travel. Join the conversation in the Wheel & Anchor Facebook group!