Hidden Greenland: Here’s What All That Ice Is Hiding

It’s your first flight across the frozen interior of Greenland – and you can’t get over how empty it looks.

From the height of your airplane window, this is the most barren landscape you’ve ever seen.

On the skyline, the slopes of distant mountains dive into a featureless white blanket, as pristine as the snow in your back garden after a heavy fall. 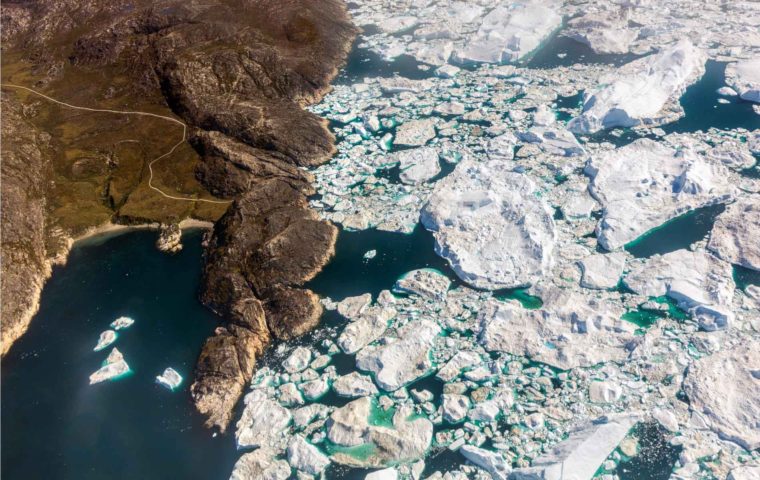 It looks like an absence of geography, a colossal blank page of a nation, with maybe a few doodles of human settlements in the margins, but otherwise lifeless and dead…

Is it really so lifeless? What is that ice hiding? What would you see, if the colossal ice sheet covering 80% of this colossal country just melted away?

We’ll get to that. But for now, let’s imagine just a slight thaw, enough to turn the first few inches into slush and send trickles of water running in all directions.

The first thing to come out of the ice is us. Humans have been in Greenland for a long time, perhaps surprisingly long considering how inhospitable this environment can be.

There were Palaeo Eskimos here up to 3,500 years ago, mostly clinging to the land’s edges in the extreme south and west. Right now there are undiscovered prehistoric remains down there, held in the ice, waiting to emerge.

If the Greenland Ice Sheet acted like most active glaciers worldwide, we wouldn’t have much archaeology to dig up – or if we did, it’d be a long way from where it originated. Moving ice is fantastically destructive, powerful enough to grind through rock. 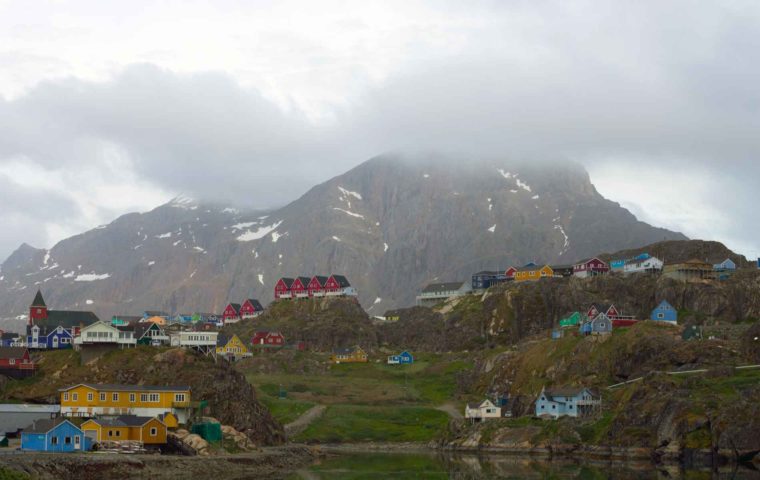 Sisimiut, the second-largest city in Greenland

But this ice sheet is frozen solid in every sense. A remarkable amount of it is locked into place, crushed under layer upon layer of frozen water until it’s two kilometres deep in places, under too much pressure to move.

That’s good news for whatever is down there. No grinding, no erosion. Just perfect suspension in time and space.

Even those few inches of thaw would overload modern archaeologists with historic and prehistoric remains. We know this, because global warming is making it happen, right now, and nobody can keep up.

Greenland’s melting ice sheet is the main driver of rising sea levels – and every year, there’s just too much history to catch as it falls out the ice.

What can we learn about Greenland’s Norse (Viking) population, founded by Erik the Red in 1,000 AD after he was exiled from Iceland? Why did these adventurous settlers decide to stay, and why did they disappear again, four centuries later?

The answers may lay on the surface of the ice right now – and they may be gone by tomorrow. 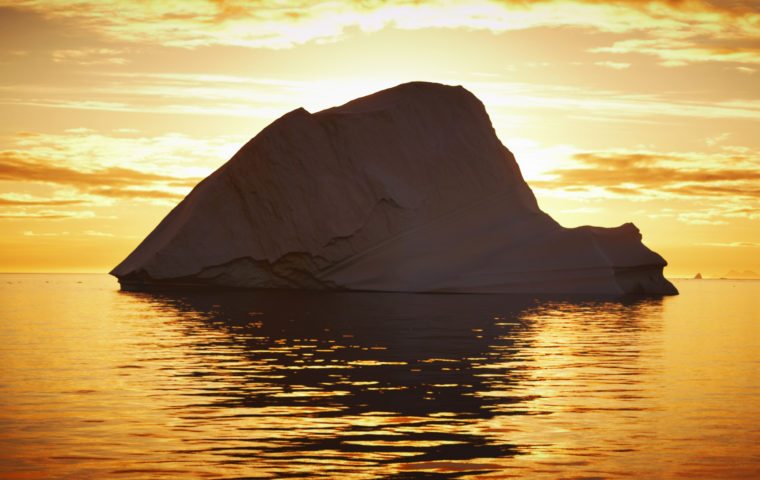 An iceberg illuminated by the sun

The deeper we get, the more we learn. Levels of lead pollution trapped in the ice correspond perfectly with the rise and fall of Classical Rome and Greece, showing the environmental effects of their silver and lead mines.

Maybe there are entire bodies of ancient people down there, perfectly mummified by the extreme cold like Ötzi, the 4,000 year old “Iceman” found in the Austrian Alps. We’ll only know when we see them, if we’re lucky enough to get there before the open air does its work.

Let’s go deeper, metres and metres below the surface.

Suddenly we’re awash. To the enormous surprise of modern science, Greenland is covered by an enormous lake of liquid water, an aquifer trapped under surface of the ice, unfrozen all year long, and covering 70,000 square kilometres.

But we’ve just scratched the surface. This ice goes down and down – and we still have 1,990 metres before we hit rock bottom.

Let’s take it all away, right now. 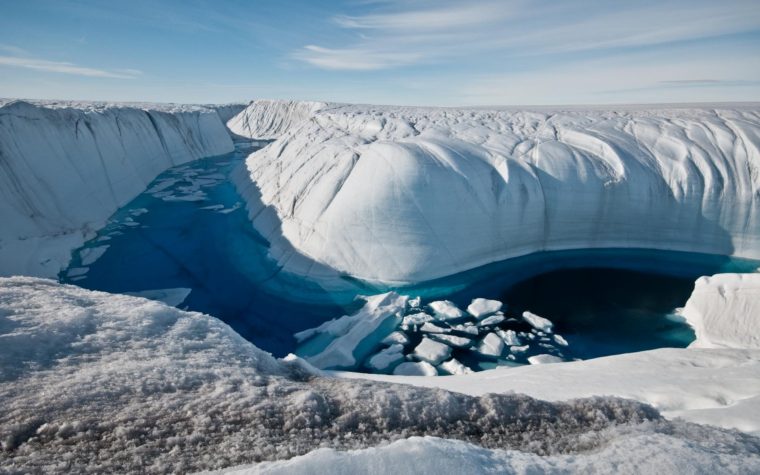 Imagine looking out of your plane window as this gigantic white landscape shudders, turns liquid and roars down towards the sea, in a vast, terrifying deluge on a scale comparable to the two-year flood that filled the Mediterranean.

All is chaos. Then the waters settle. You’re suddenly an extra two kilometres higher in the air, looking down on a new land – and oh, what a land.

Without its ice, Greenland becomes an amphitheatre of rock and tundra on a mind-boggling scale.

Its core is much lower than its periphery, creating a huge, shallow inland sea (you can see a visualization of it here) – while on the east coast, hundreds of miles of mountain ridges now soar into the sky, fractured by enormous canyons.

NASA radar data has found that one of these canyons is up to 800 metres deep and longer than the Grand Canyon. It’s a landscape on a truly epic scale.

Is this all a flight of fancy? Not in the least. This was what it looked like around 2.7 million years ago. It’s a real world, this other Greenland, and it’s still there under all that ice.

There are even tentative but exciting signs that the remains of an ancient forested landscape, including organic soil, are still preserved down there – the world of our earliest primate ancestors, before humans existed. 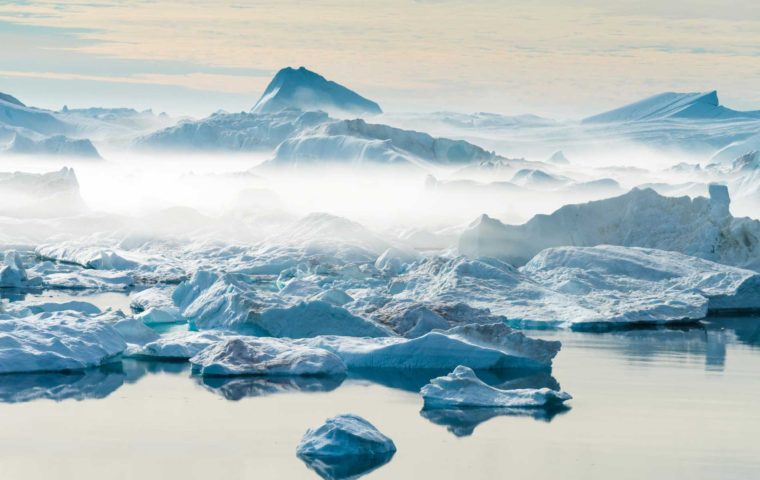 Icebergs forming at the mouth of the Ilulissat Icefjord, Greenland

So maybe there’s not much to see as your plane banks towards the airport at Kangerlussuaq, and the endless plains of featureless ice turn to rivers and fjords – but you’ve just flown over one of the world’s final frontiers, unseen for millions of years, and emerging for the first time in human history…

So maybe now’s exactly the right time for a closer look.