The World’s Most Valuable Carpets

You’ve never seen anything like this. Sure, you’ve seen carpets before – but this is to carpets what the Tesla Model 3 is to family cars. It’s a tightly-woven explosion of geometric patterns in stunningly rich colours with a design that seems to pull you in, as if it’s made of fractals and you’d go down into it forever… 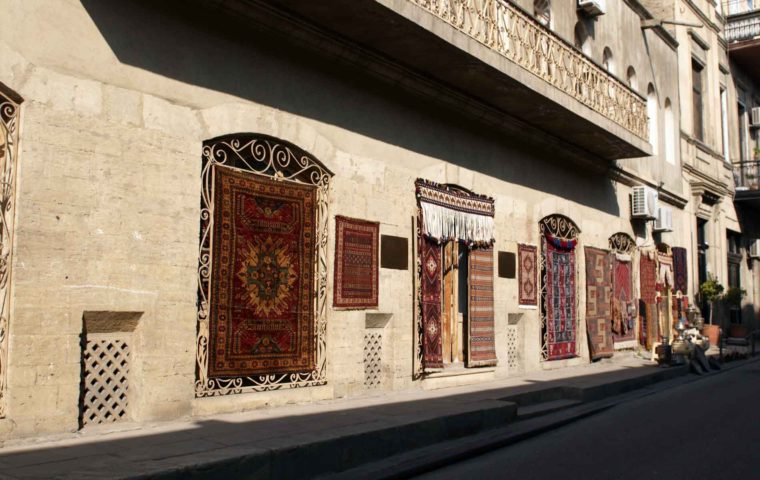 Carpets outside a shop in Baku’s Old City

Elsewhere in the world, he might have said “Caucasian” – the standard name for rugs that come from the countries in the region of the Caucasus.

It almost always means “Azerbaijani” in practice (around 95% of the time). You’re in Baku, the heartland of carpet-weaving, and it all starts here.

The patterns on an Azerbaijani carpet are an ancient language that few still know how to speak.

Different patterns and textures speak of family traditions that stretch back centuries, passed on by word of mouth and intense craftsmanship – a little like how Scottish tartans denote clans, but also far deeper and more intricate than that.

These fabrics walk the line between art and history written in material.

Where you can see a major difference in patterns between carpets, you’re probably looking at different identities – maybe something here from the Nakhchivan Autonomous Republic, maybe something there speaking of its origins in Barda.

Even within the same regions there are style differences – from the patterns of jejim spaced out the same width of the weaver’s feet, to the flat-woven Shadda style, wrought in brightly contrasting colours, monochrome or checkered. Both can be found being made side by side in Nakhchivan.

“Much of our history here,” enthuses the shopkeeper, and he’s not kidding. At one time, much of everyday life revolved around carpet-making. 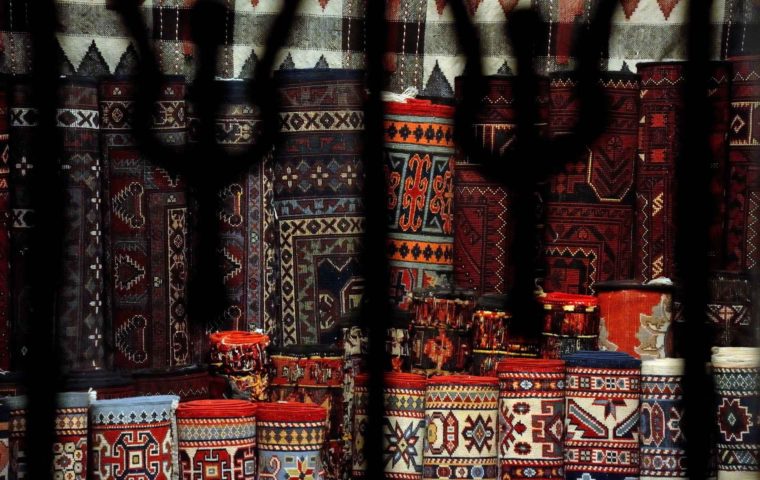 A variety of patterns and sizes of Azerbaijani carpets

The men sheared the sheep, and the women collected it, assembled the dyes, and spun the yarn.

Carpet-making skills were the mark of a successful Azerbaijani women, taught to her from a young age – and the carpets she made became part of her dowry.

The start and the end of an individual carpet was a big affair, usually involving a feast.

Even passers-by got in on the action: if a carpet was thick enough to need treading down flat, it was laid in front of the house, and neighbours were encouraged to come walk all over it.

Now, of course, it’s big business for tourists and travellers like you. Tradition has given way to more commercial pressures. But still, that language remains, woven into the carpets on sale in Baku and across Azerbaijan.

It’d be a lifetime’s work learning what they’re saying. You’d be forgiven for just wanting to catch a phrase and take it home.

The shopkeeper’s eyes gleam. He can tell you’re interested.

“My prices are excellent. You know these are the most expensive carpets in the world?”

If you’re familiar with the reputation that surrounds Persian carpets, you might think he’s exaggerating. He absolutely isn’t. 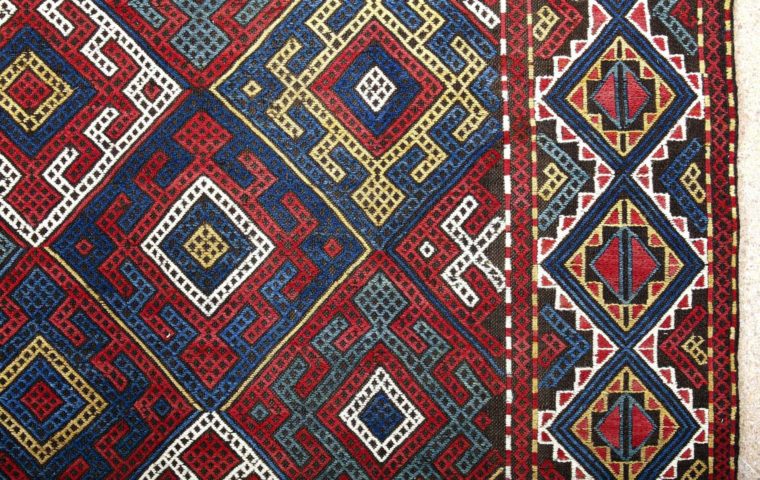 Detail of an Azerbaijani carpet

By area, these are the most valuable antique wool Oriental rugs in the world.

One example, an Azerbaijani Star Kazak, sold at Christie’s auction house for a record-breaking $284,560 (USD).

These are the most desirable carpets in the world – which is why you’ll find them in the White House, the State Department, and just about every major arts museum worldwide.

Of course, you’re not going to walk away with an antique today – which is a good job, because you’d be arrested at the border.

Exporting Azerbaijani carpets that are more than 30 years old is strictly forbidden, and the local authorities take this very seriously indeed (which is understandable when you consider you’d be taking a part of the country’s historical record).

No – you’re here to partake in the modern form of carpet-making, even if its roots still go back hundreds of years…

You see a design you like, and a price you can afford. So – how do you do this?

If your shopkeeper is the very best kind, he now disappears into the back, and emerges with a certificate for the carpet – an official-looking document showing the age of the carpet and the price he’s selling it for.

Without one of these, there’s no way you’re taking your carpet through customs. It’s a paper-trail that shows you’re not the kind of international smuggler that blighted the industry in its earliest years.

But what if he can’t supply one – which is the case maybe half the time? No sweat. All you need to do is take a trip into the centre of Baku and walk inside the city’s biggest rolled-up carpet. 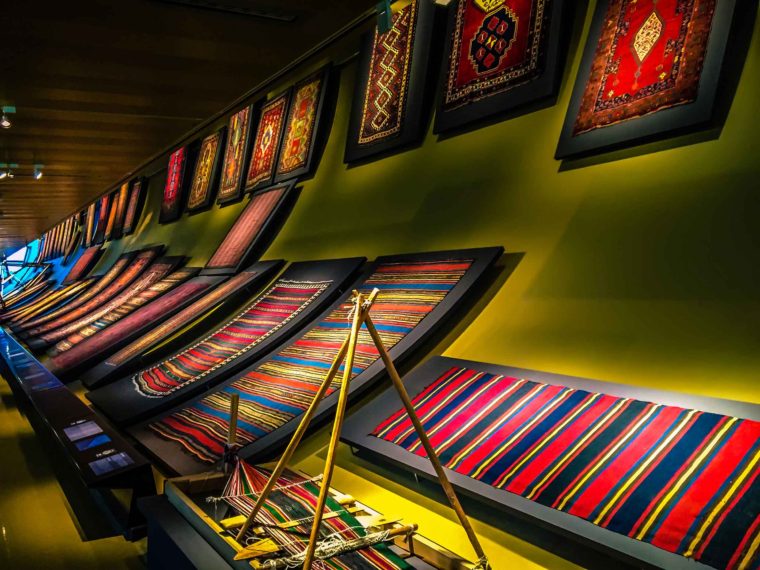 Carpets on display inside the Azerbaijan Carpet Museum

It started life in 1967 as the Azerbaijan State Museum of Carpet and Folk Applied Arts, which doesn’t exactly trip off the tongue.

Then it became the State Museum of Carpet and Applied Arts – and finally, in 2014, the far more manageable Azerbaijan Carpet Museum.

You can’t miss it – it looks exactly like a colossal gently unrolling carpet, complete with designs scrolling up the sides. Inside, the country’s finest carpets are displayed, climbing the curving walls in a most uncarpet-like way – until you remember that in this part of the world, carpets aren’t just designed for the floor.

But you’re not here to see the sights – you’ve got a carpet to export.

If you’ve timed it right (it usually happens on Wednesdays), the office in the museum is open that issues certificates for carpets. It’ll take a few days for you to get it drawn up, but this is how you do it – and how you stay on the right side of the law.

Luckily for your shopkeeper, you know how all this works. He’s in luck, and has a sale – and you have an incredibly beautiful example of Azerbaijan’s artistry and history, quite literally woven together…

You can’t wait to show your family and friends. They’ve never seen anything like this.

See them with your own eyes by joining Wheel & Anchor this October in Azerbaijan, Georgia, and Armenia…get more information here!