How Pisa’s Incredible Leaning Tower Survived Against All The Odds

Everyone’s first glimpse of Pisa’s most famous tower is a nerve-wracking one. Your stomach clenches and your throat tightens. There it stands, 55 metres into the blue Italian sky - and right before your eyes, this 14,500 metric ton edifice seems to be toppling over. 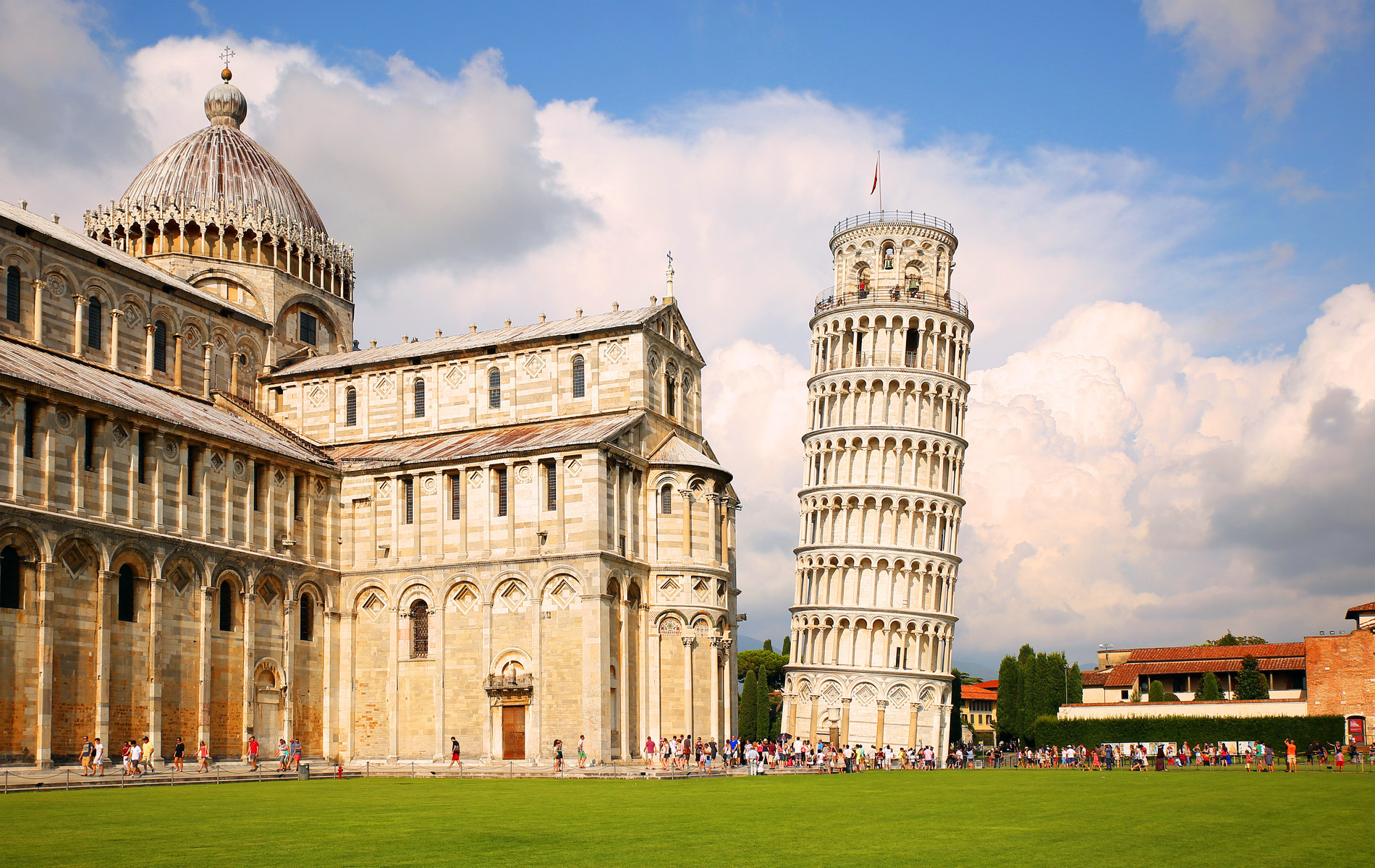 The famous leaning tower of Pisa

Run! Get out the way!

Then the messages from your eyes meet the facts you already know. It’s not moving. Of course it’s not moving - it’s the famous Leaning Tower, a highpoint of our upcoming tour of this magnificent country, and one of global tourism’s most famous sights.

Nobody would let this stunning landmark collapse, surely?

But what if this is the day it finally comes down? says an insistent whisper in the back of your mind.

Never fear. Partly through design, partly through sheer luck, and seemingly against all the odds this building has discovered the secret to staying upright - and it’s taken over 800 years for us to learn what it is.

It’s 1173 AD, and the first stones of the tower’s foundation are being laid. A few are the work of generous donations, including Donna Berta di Bernardo, a widow who donated the princely sum of 60 silver coins towards the construction of this bell tower for the nearby cathedral.

Work’s being taking place here for over a century, funded by the Catholic church and by private donations from wealthy local citizens.

We have no clear idea who the designing architect was. The names and the faces are lost in time. But we do know that this freestanding tower was meant to be straight - and after just five years of building-work which saw the completion of the first floor, it was starting to lean in an alarming way. 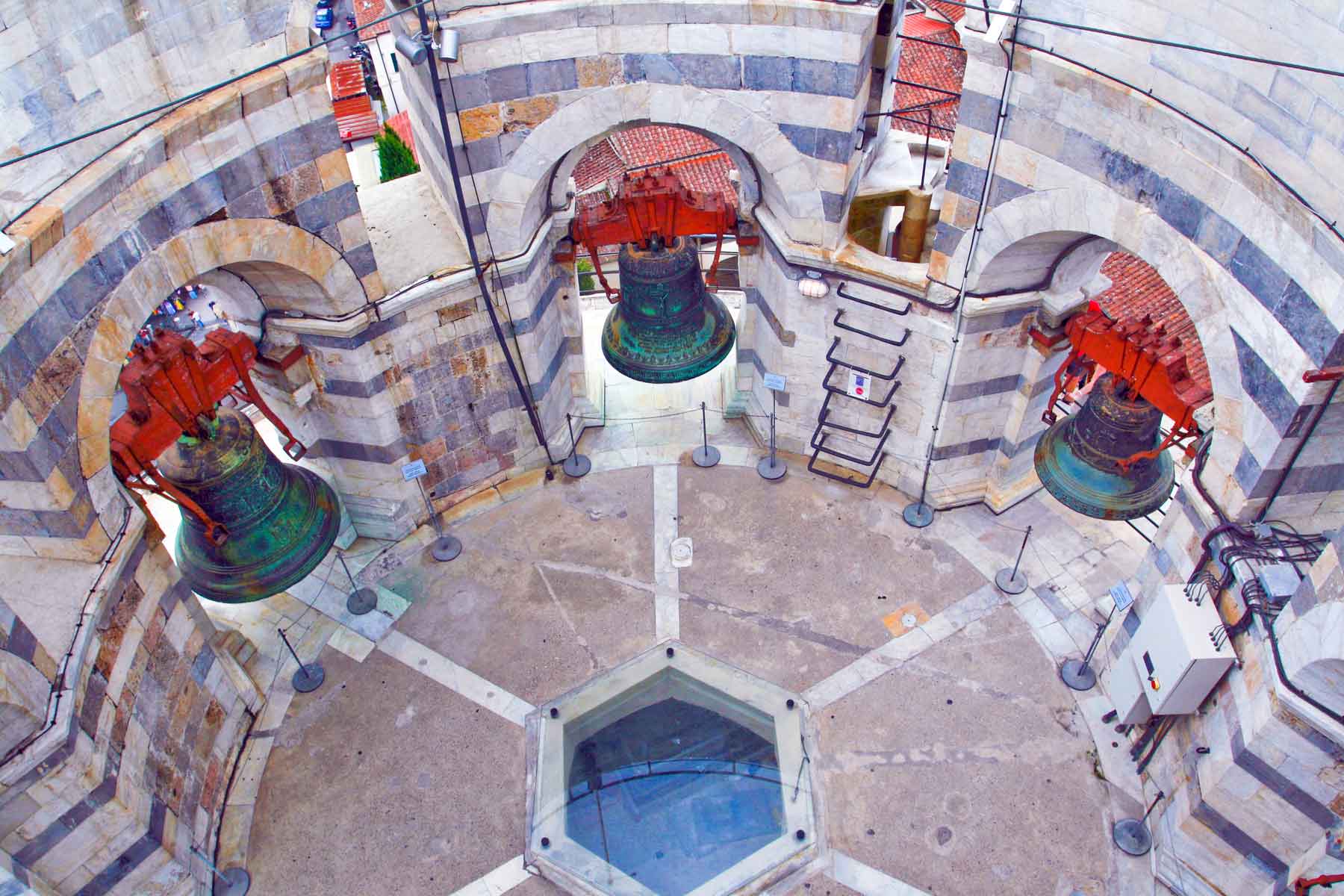 The bells in the Tower of Pisa

The soft ground was slumping on one side. If construction continued at the same rate, it was sure to topple over.

At this point, luck seemed to have played a hand. The independent state of Pisa, one of the Mediterranean’s primary economic powers, had many rivals, and the century following 1178 was one of almost continuous warfare with the nearby republics of Genoa, Lucca and Florence.

Wars cost money, cutbacks had to be made, and work on the leaning Tower - which gave the soil under the foundations time to compact and firm up. In the most ironic of twists in the building’s history, neglect became its saviour.

Now it’s 1372, and the tower is finished. It’s now seven floors high, around 296 steps to the top, and capped with a bell-chamber. The ground seems firm, all movement has ceased, and because of its jauntily-inclining nature, the finished work is heralded as a quirky masterpiece.

And there it stood, undisturbed and revered, for over half a millenia - until one man decided he knew better.

It’s 1838, and local architect Alessandro Della Gherardesca has tasked himself with beautifying the grounds of the cathedral. He looks at the Leaning Tower and finds it aesthetically lacking. 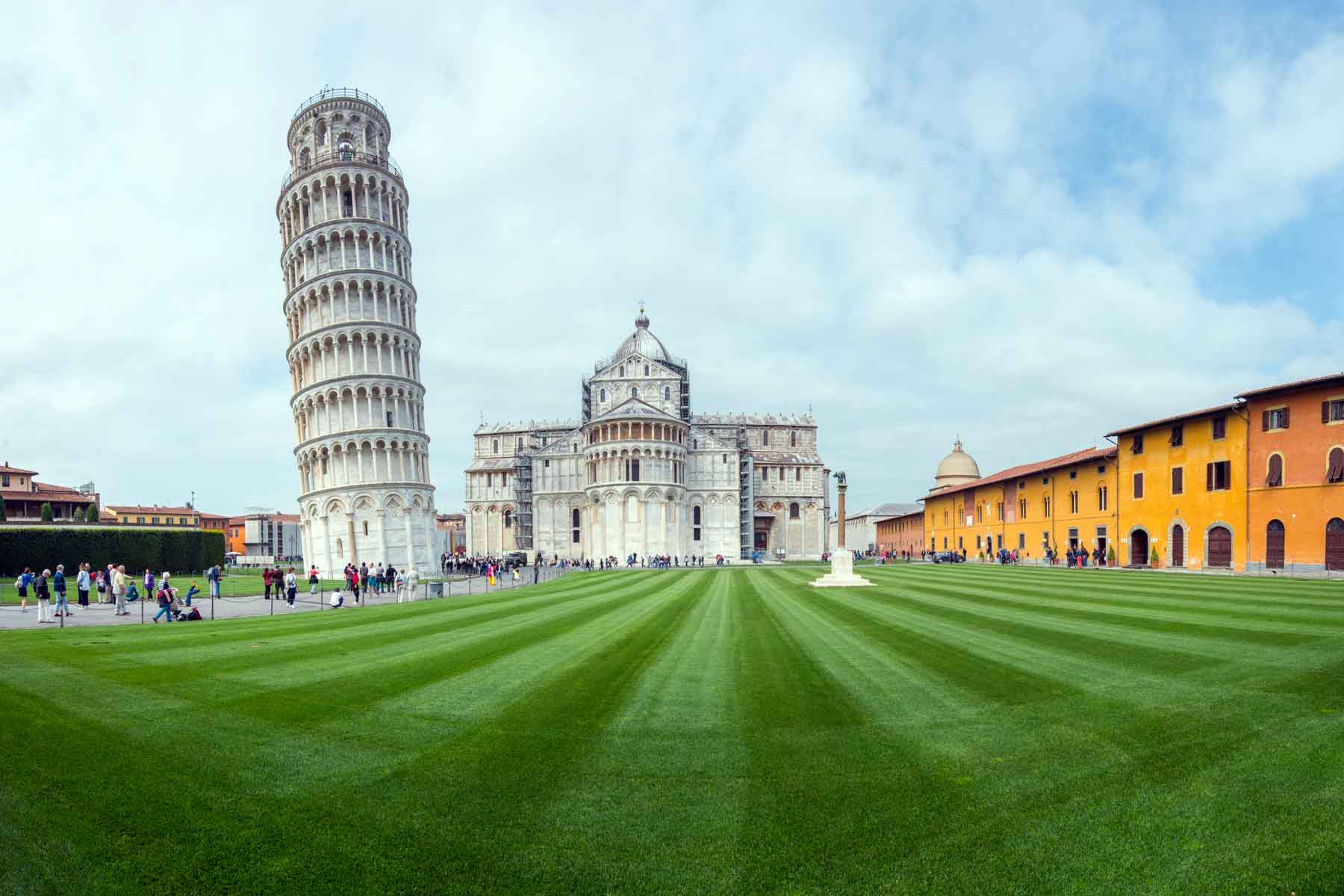 The Tower and the Cathedral of Pisa

What about all that stunning architecture that’s hidden under the ground? The place has stood for 500 years, so it’s clearly stable enough to do a bit of work on it - so he starts digging at the base of the building, creating a walkway for sightseers.

Within days, and to Gherardesca’s utter horror, the tower starts moving. Over the course of the next few weeks, it slumps sideways even further - and finally comes to rest another foot out of alignment, and in a position that was exerting so much lateral pressure that further movement in the future seemed likely.

Alas, 19th-Century Italian architecture had no answer to this dilemma - and so the tower was left to its seemingly inevitable doom.

Now it’s the Second World War, and an American Army sergeant is scouting the area, looking for German troops and snipers. Anywhere highrise is a threat, and therefore a good target for heavy artillery.

He eyes the tower and the buildings that surround it.

It’s curious to think that 800 years of fascinating history could have been erased in the blink of an eye, and the thunder of incoming high-explosive shells, if a soldier had been just a little less receptive to the beauty of 12th Century Italian design.

But after scouting the grounds, this sergeant decides the site was worth saving, and calls off the artillery strike. 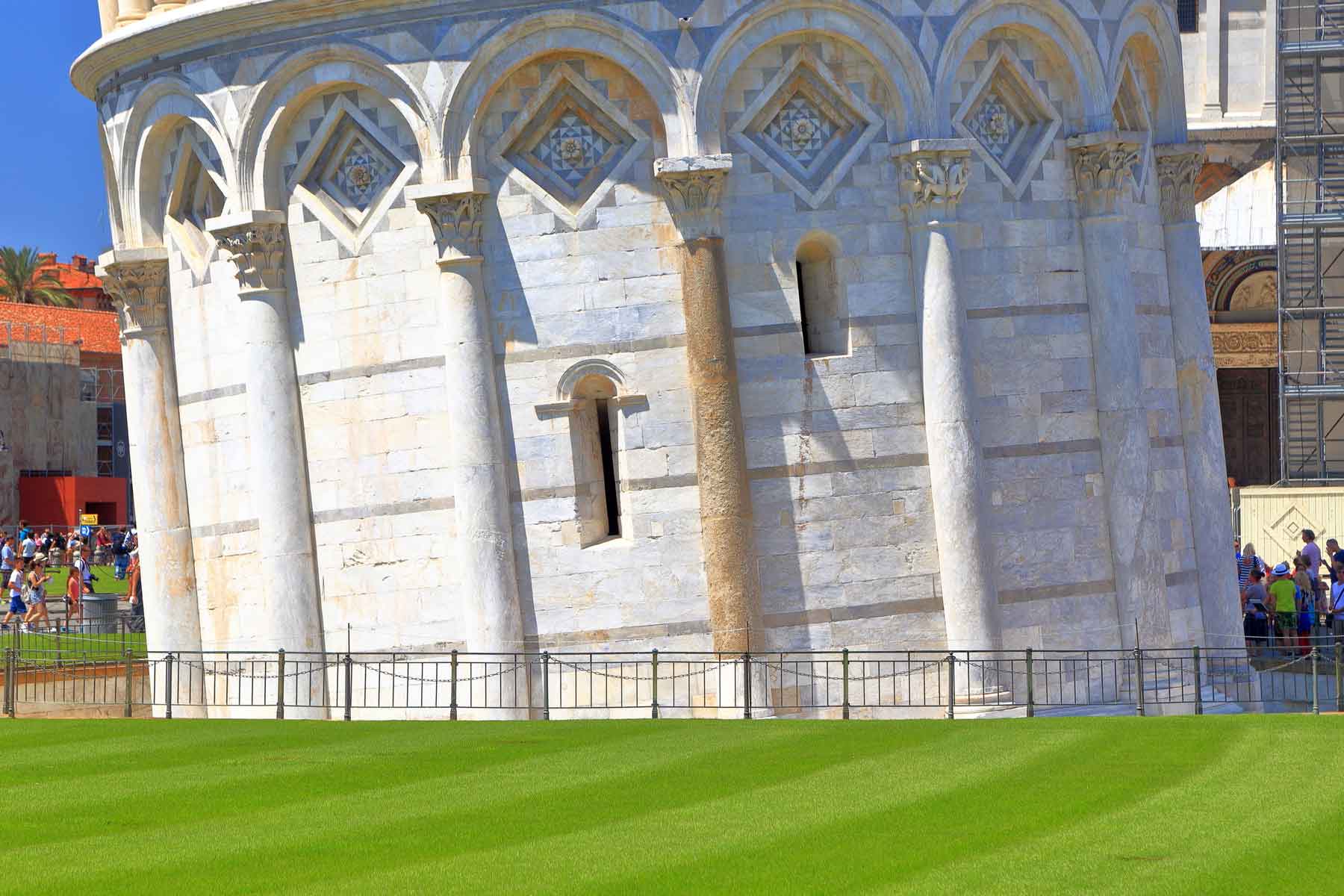 The base of the Leaning Tower of Pisa

It’s equally odd to think that an invading force did more for the tower’s survival than its native government.

In 1934, in one of the grandiose but ill-informed construction projects that he became notorious for, Italian dictator Benito Mussolini announced that he would straighten Pisa’s leaning tower once and for all.

His troops drilled 361 holes into the foundations and filled them with concrete - and the tower lurched sideways even further.

But by 1990, the tower’s years were clearly numbered. Another half-century of its slow creep sideways, aggravated by corrosion from airborne salt-water from the coast, and the tipping-point would finally be reached.

By 2040 AD, the tower would almost certainly be rubble. Something had to be done.

A multinational force of architectural experts converged on Pisa, and employed technology that was an impossibility until now, using high pressure cables and colossal earthworks. Within a decade, the tower had been inched back to its position in 1838, with just under four degrees of tilt - where it rests today, stable for at least another 200 years.

Now, in a final twist in the tale, scientists believe they’ve discovered the secret to its incredible longevity.

Seismic activity in Italy is an ever-present challenge to modern architects, and a constant threat to its historical treasures. 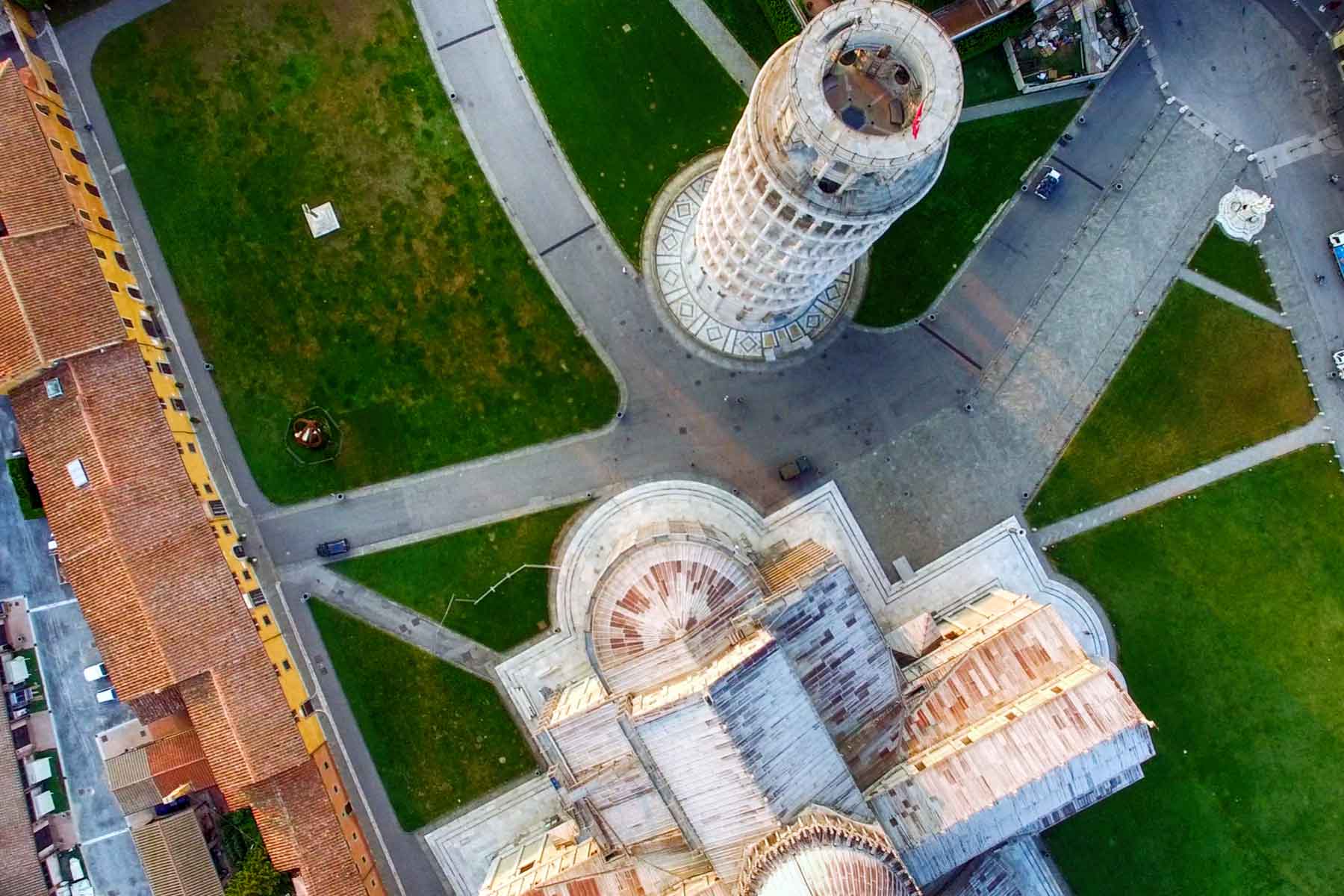 The square of Pisa from above

It doesn’t take much for an ancient building to be shaken apart, especially if it’s already structurally unsound. Somehow, the Leaning Tower had survived four major earthquakes (on top of its history of being tampered with by enthusiasts). How?

A research group of engineers from the University of Bristol investigated - and found that the height of the tower combined with the softness of its surroundings led to a phenomenon called dynamic soil-structure interaction (DSSI), which helps absorb the energy that would bring down other buildings.

Thanks to its unique properties, Pisa’s tower is recognized as the world leader in earthquake-dampening DSSI effects.

In other words, if it had been built on more solid ground, if its original architects hadn’t resumed building it at the end of the 13th Century, and if it wasn’t seven unlikely floors high, the tower would probably have collapsed long ago.

So there it stands today, a testament to the power of perseverance, hope and sheer luck. It’s an incredible story, and it’s certainly not done yet (despite everything your alarmed senses are telling you, as you stare at it with wide eyes).

Bravo, you magnificent, lopsided marvel of the medieval world. We’re so happy you found a way to stick around.