How To Get High In Athens, Greece

There’s not much to mark the birthplace of Western democracy.

If it wasn’t for the rock-cut steps that led you to the top of this bare, low hill, and a few raised surfaces worn smooth by the passage of many feet, you’d see nothing - yet some of the most momentous decisions of Greek history were decided here.

The hill’s very name, Pnyx, means “tightly crammed together,” and 6,000 people could have squeezed onto it. 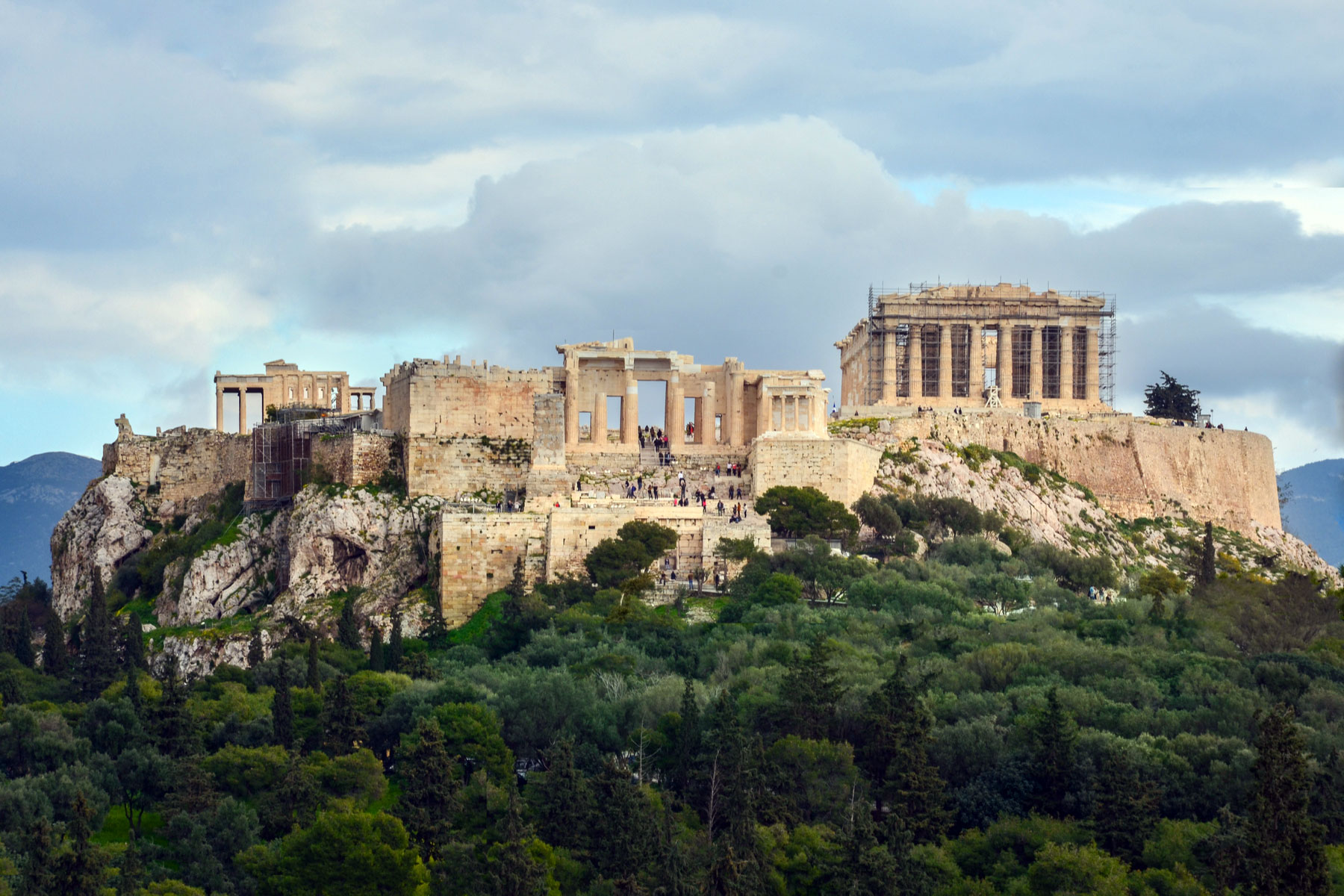 A view of the Acropolis from Pnyx Hill, Athens

The famous Classical speakers Pericles, Alcibiades, Demosthenes and Socrates would have walked up here, would have muttered, lambasted, implored, argued, and shaken their fists, steering the mood of the crowd and laying the oratorical foundations for much of our modern society.

But you? You see nothing of it today. There’s nothing but the wind, the view of a city too big for your mind to take in, and the distant grumble of traffic.

You can never completely escape the noise of traffic in today’s Athens - but up here, soundproofed by the surrounding parkland belonging to the Greek Ministry of Culture, it’s as quiet as anywhere you’ve found.

So much of Athens is exciting - a barrage of energy at the meeting-point of the East and the West - but up here, above the energy of the streets, it’s delightfully peaceful.

You savour it, bask in the heat, and try to imagine what’s missing, all that history so long gone – but all you can see is what’s here, which is virtually nothing. Still, it’s a serene spot to get your bearings and take in the surrounding sweep of the city - but it’s still not high enough. To get the view you want, you need to climb to the roof of Athens and look down on it all.

You know about the city’s  - and arguably all of Europe’s - most famous landmark. You think you know where the best, highest viewpoint is. It’s a no-brainer. 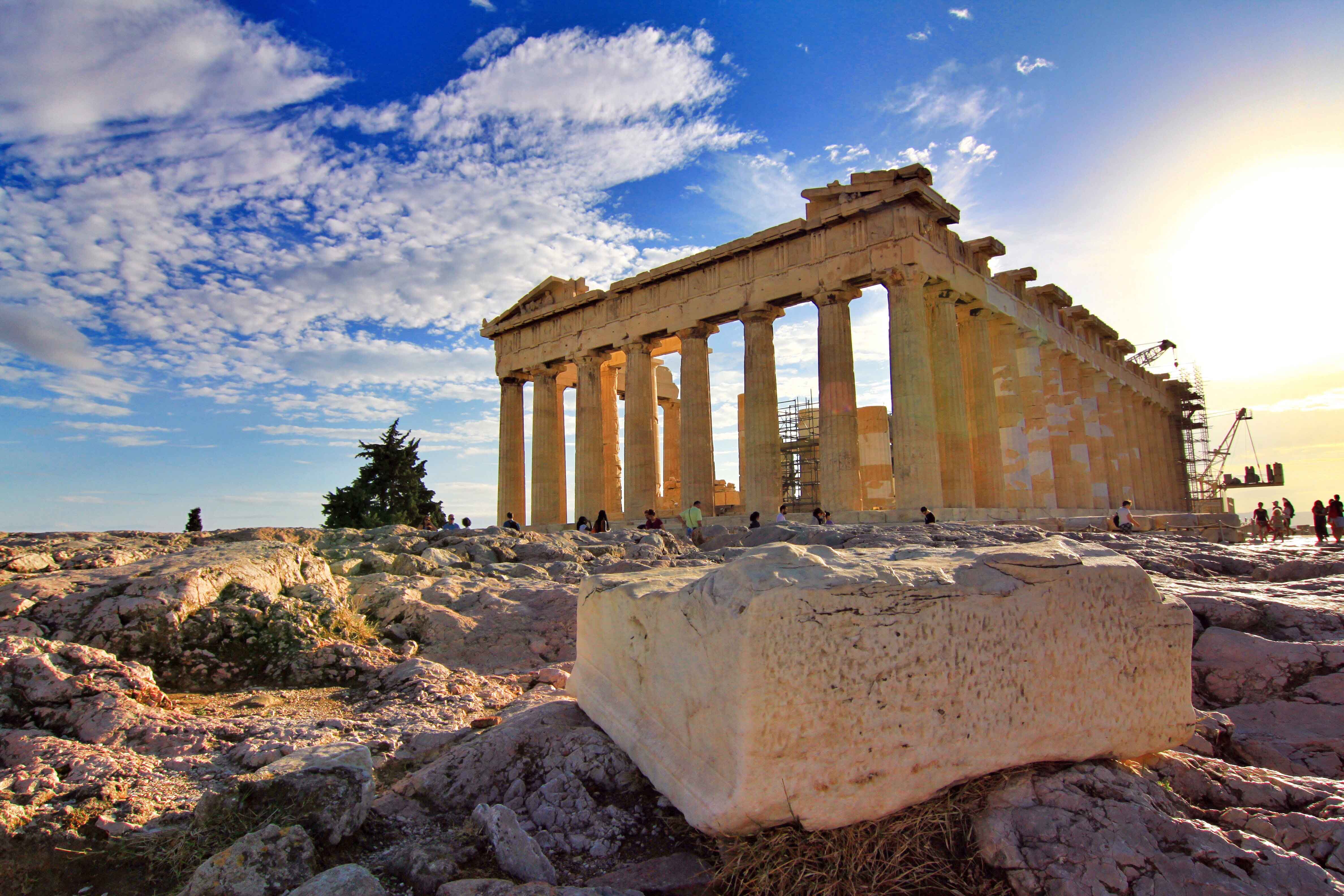 The Parthenon in Athens, Greece

Everyone around the world has heard of the Acropolis. What’s less well known is the significant of that capitalized “A”. The Greek word acropolis means “highpoint of the city”, and many other Classical Greek cities had one, including Argos, Thebes and Corinth.

If the word is expanded to mean any major bastion of rock overlooking a city, you’ll find them all across the world (for example, in Scotland’s Edinburgh, site of the city’s castle) - but while there may be many acropoles, there’s only one Acropolis.

There have been people atop the 150-metre limestone platform above Athens for at least 8,000 years, making use of this natural defensive point in the landscape, from which the city eventually grew. There are scattered traces in the Early Neolithic, and signs of a temple from the Bronze Age around 5,000 years ago.

However, the temple complex we know indelibly associate with the name “Acropolis” is the work of the city’s most famous military leader, Pericles (he of the speechmaking up on the Pnyx). His building programme marked the high point of the so-called Golden Age of Athens (460-430 BC) - and its most celebrated structures can be seen today.

It’s true that they’re a little worse for wear. When you visit, you may see scaffolding here and there. You’ll see attempts to repair the ravages of two millenia.

You might see the marks in the mighty Parthenon from that terrible day in 1687, when the occupying Turkish army was fending off an Venetian attack.

A stray artillery shot punched through the roof of the temple - which would have been bad enough, but this one landed in the gunpowder magazine the Turks were storing inside, triggering a massive explosion that left Greece’s most famous building in smoking pieces. 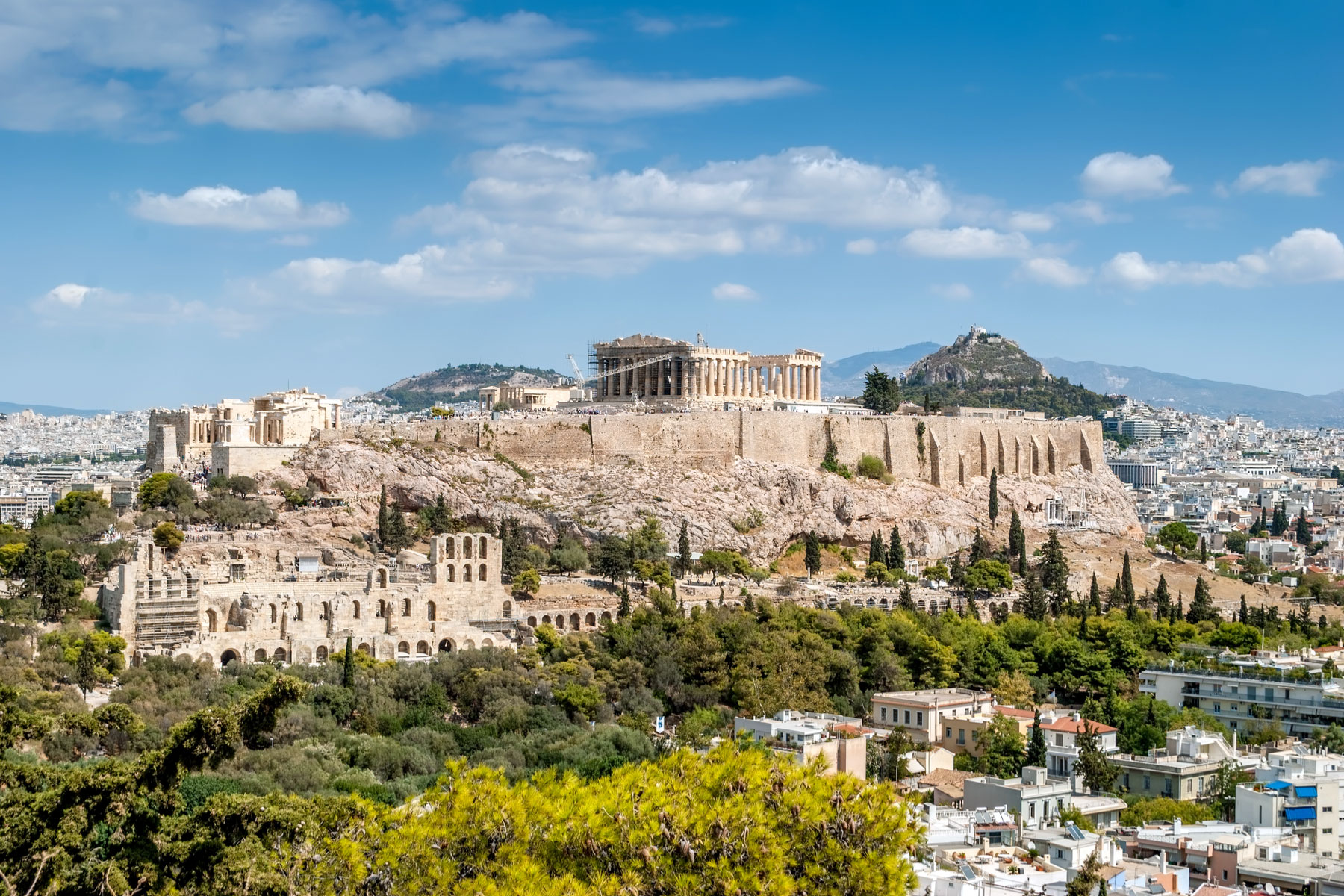 The Acropolis with Lycabettus Hill in the background in Athens, Greece

It’s all there to see, and well worth the visit, if you’re prepared to queue for a while and worm your way through some pretty heavy crowds - and then of course, there’s the view of the city, if you look outwards and down to the streets below. As you’d expect, it’s spectacular.

But it’s not the best view.

You can’t miss the highest point in Athens. The Acropolis may draw your eye due to its sheer, otherworldly loveliness (which on a clear day can look almost unconvincing, like a piece of visual effect work that’s just a little too perfect) - but try tearing your gaze away and looking northwards, to where a green pyramid lifts above the skyline, capped with grey and white.

Lycabettus Hill (sometimes spelled Lykavitos) rises 270 metres above the city blocks that surround it - and once you’re up there, the view is like you’re looking out the window of an aircraft.

Once you find the street-level entrance to the gardens surrounding Lycabettus, it’s a winding hour’s walk to the top of the hill (which is more a small mountain, really).

If it’s a hot day, you’ll need water to drink, liberal amounts of applied sun-cream and some kind of hat - but all the effort will be well worth it.

(Don’t worry about coming back down later. There’s a cable-car. And you really should only be told about it when you get to the top, because the walk really is a beautiful thing to experience.)

The best time to be there is in the last hour before sunset, as the city is aglow with oblique golden light that fades by the minute - until the magical moment when the city’s lights start to flicker on, a million pinpricks of light that stretch to the horizon in every directions. 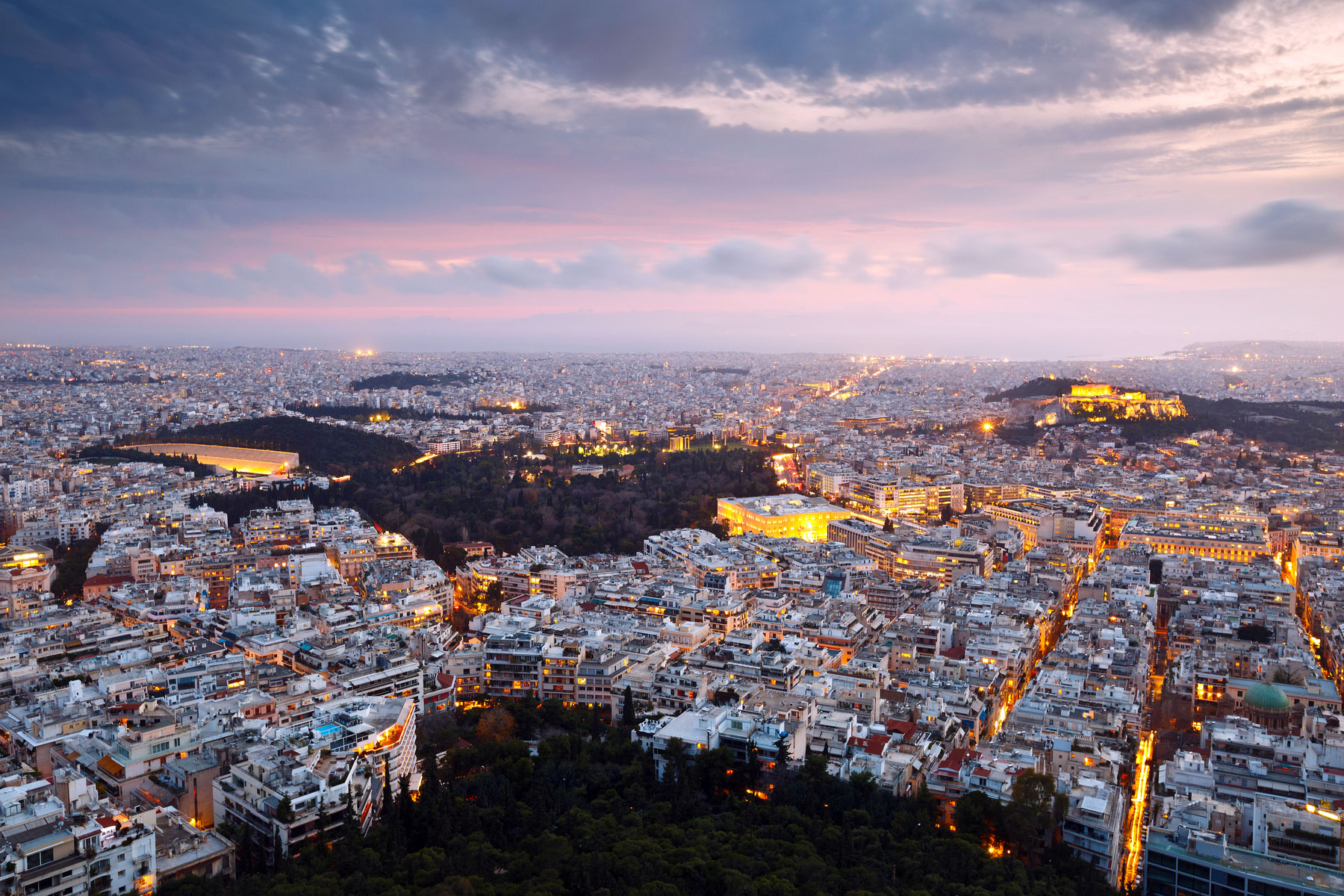 Athens at dusk from Lycabettus Hill

It’s now when you realize just how massive Athens is. Even if you know it covers 3,000 square kilometers, well, that’s just a number. But this, right now, with all these lights, is something you feel.

And then you look south, towards the Acropolis, now the subject of its very own light show, with the Parthenon’s columns illuminated with orange spotlights, a little like pale fire (you remember the 1687 explosion and wince)...

And then you notice how far below the Acropolis is - along with everything else. There’s nothing of the city above you. Everything is below.

This is, in every sense, the high point of your visit to this marvelous city.

Then it’s time to descend into the city for dinner (although maybe not, since there’s an excellent restaurant up here as well) - and you’ll enjoy a glimpse of the city’s bewitching nightlife, perhaps moving between bars and pubs in the Plaka district which winds around the Acropolis, giving you the most incredible backdrop you’ve ever enjoyed with a glass of wine in your hand.

Thanks for the incredible highs, Athens. You’re quite the looker.