In early July of this year, the inhabitants of Innaarsuit, a tiny island village in northwestern Greenland, looked out to sea and saw an iceberg.

This was nothing new, of course. The vast majority of all icebergs in the northern hemisphere originate from around 20 locations along the coast of this massive country, and they’ve recently been increasing in numbers every year.

However, this one was unusually tall, over 100 metres high - and it wasn’t floating past, on the way towards the Labrador current that would carry it into international shipping lanes.

It was heading straight for the village.

By July 11th, the situation was desperate. The iceberg had halted in the bay in front of the village, with its base wedged on the ocean floor - but it was starting to break apart (a process known as calving).

Colossal house-sized chunks of ice were plunging into the water. If larger pieces fell, or if the whole iceberg disintegrated or flipped over, the resulting tsunami could completely destroy the settlement, killing all 169 of its inhabitants.

To the inexperienced, icebergs may not seem like such a big deal. Of course, there’s the story of the one that the Titanic ran into, in the days before ice-watching technology was available.

The crew of the Titanic was warned, and ploughed on anyway, with disastrous results. No modern ship would make the same mistakes or be so blind to the presence of icebergs. So what’s to worry about? 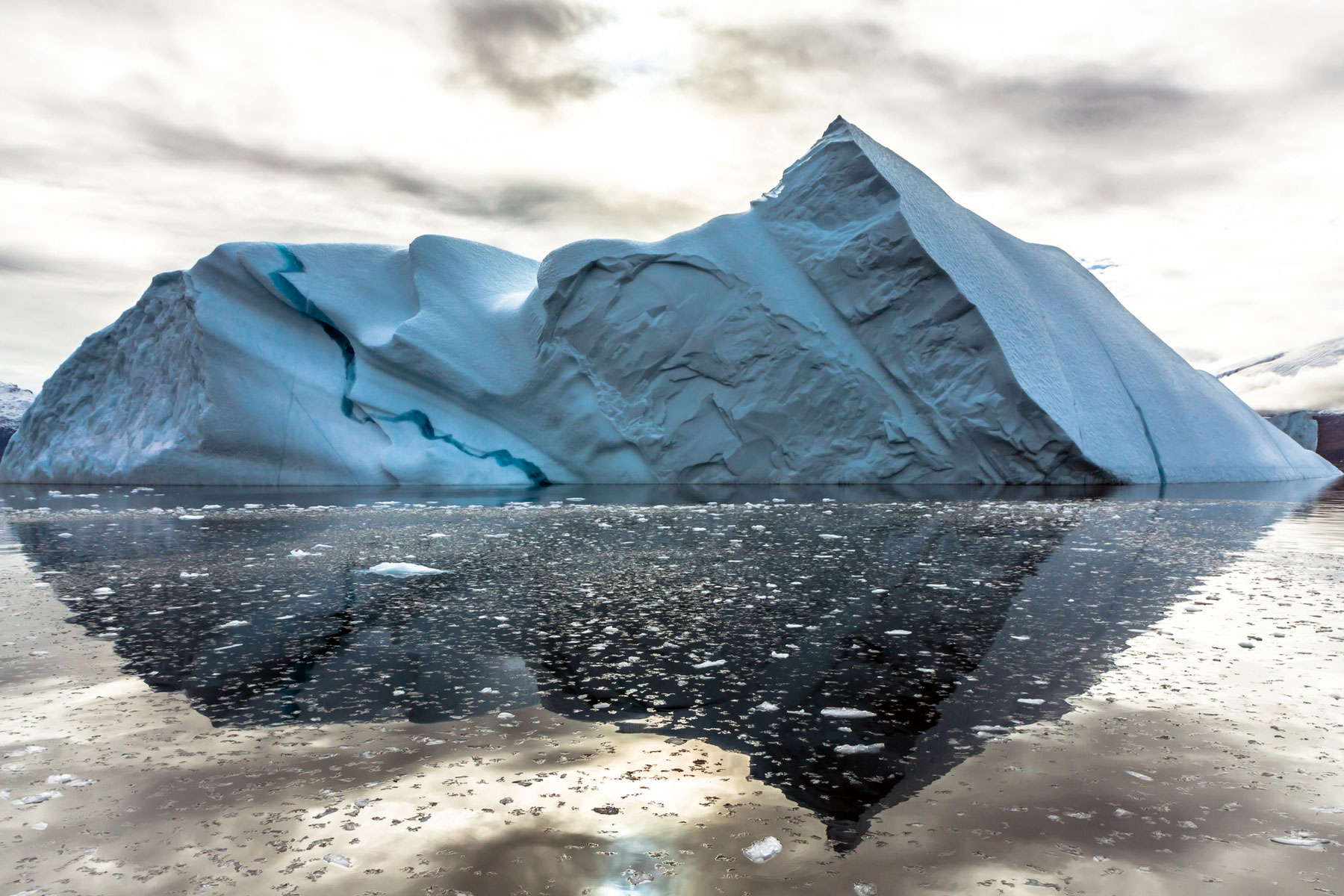 An iceberg off Greenland's western coast

If you’re planning a trip to Greenland sometime soon - you should take the opportunity to ask a modern Greenlander about icebergs. If you’re brave,  try using the phrase “not such a big deal”, just to see how they react.

They know the truth about how fascinating, complex, and worthy of extremely cautious respect these massive structures are. They’ll set you straight.

But in the meantime, here are a few myth-busting truths about icebergs that everyone should know.

In a sense, it’s an easy mistake to make. It’s so cold up in the Arctic Circle that the sea freezes, then it breaks apart, then you get icebergs. Right? Well, not so much.

There are seawater icebergs that form when pack ice breaks apart, but they’re generally low and flat and not very tall (and made of freshwater, since the salt.separates out as the water crystallizes).

However, the really big icebergs are formed in an entirely different way.

They’re made of ancient rainwater and snowfall, frozen onto the land in vast compressed sheets of ice that eventually slip sideways under their own weight and become glaciers, creeping ever-downhill. When they meet the ocean, vast pieces break off and become towering icebergs. 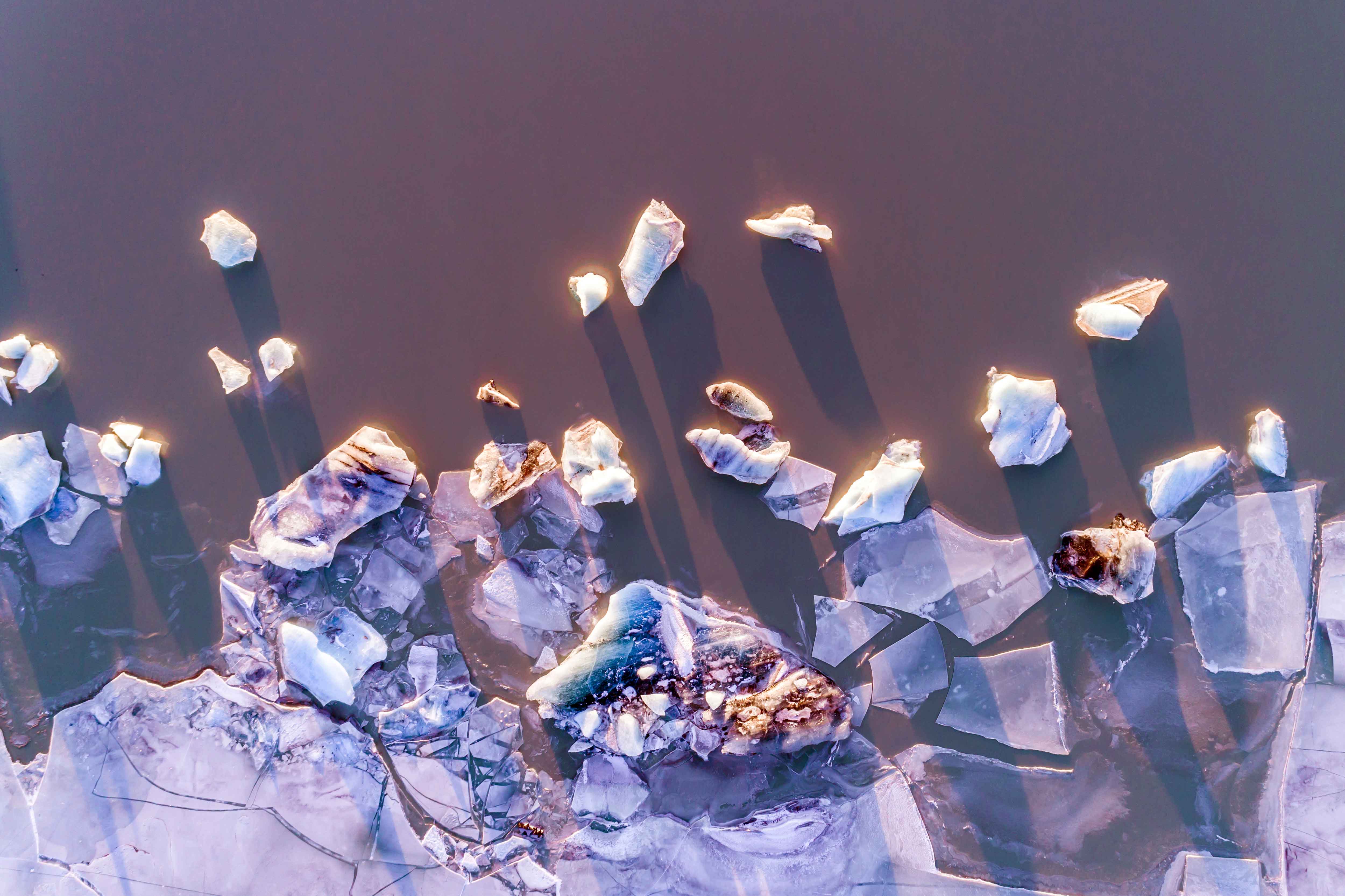 An overhead drone shot of icebergs in Greenland

The “Tip Of The Iceberg” Is Far Smaller Than You Think

Thanks to the popularity of that phrase as a useful analogy for many other things in life, we understand that the bulk of the iceberg is under the water - but that’s really, really hard to grasp when you’re looking up at a 100 metre high mountain of ice.

Thanks to basic physics, around one-sixth to one-ninth of an iceberg is ever above sea level - meaning the strongest force acting upon them is usually ocean currents, not the wind (for this reason, it’s not uncommon to see an iceberg moving into the wind).

All this becomes dramatically important when an iceberg has melted or fractured enough to become unbalanced in the water.

An iceberg rolling over isn’t just an astonishing sight, like watching an apartment block doing a barrel roll - it’s also an incredible explosion of energy, most of it transferred into the surrounding water.

When you consider that a flipping iceberg releases the same power as a nuclear explosion, you can see why the inhabitants of Innaarsuit were keen to get out of the way.

Their True Colours Are Absolutely Beautiful

If you’re ever lucky enough to see a recently-flipped iceberg with a base that has spent all its time underwater, you’ll see the true colour of glacial ice - and as filmmaker Alex Cornell discovered, it’s a stunning sight. 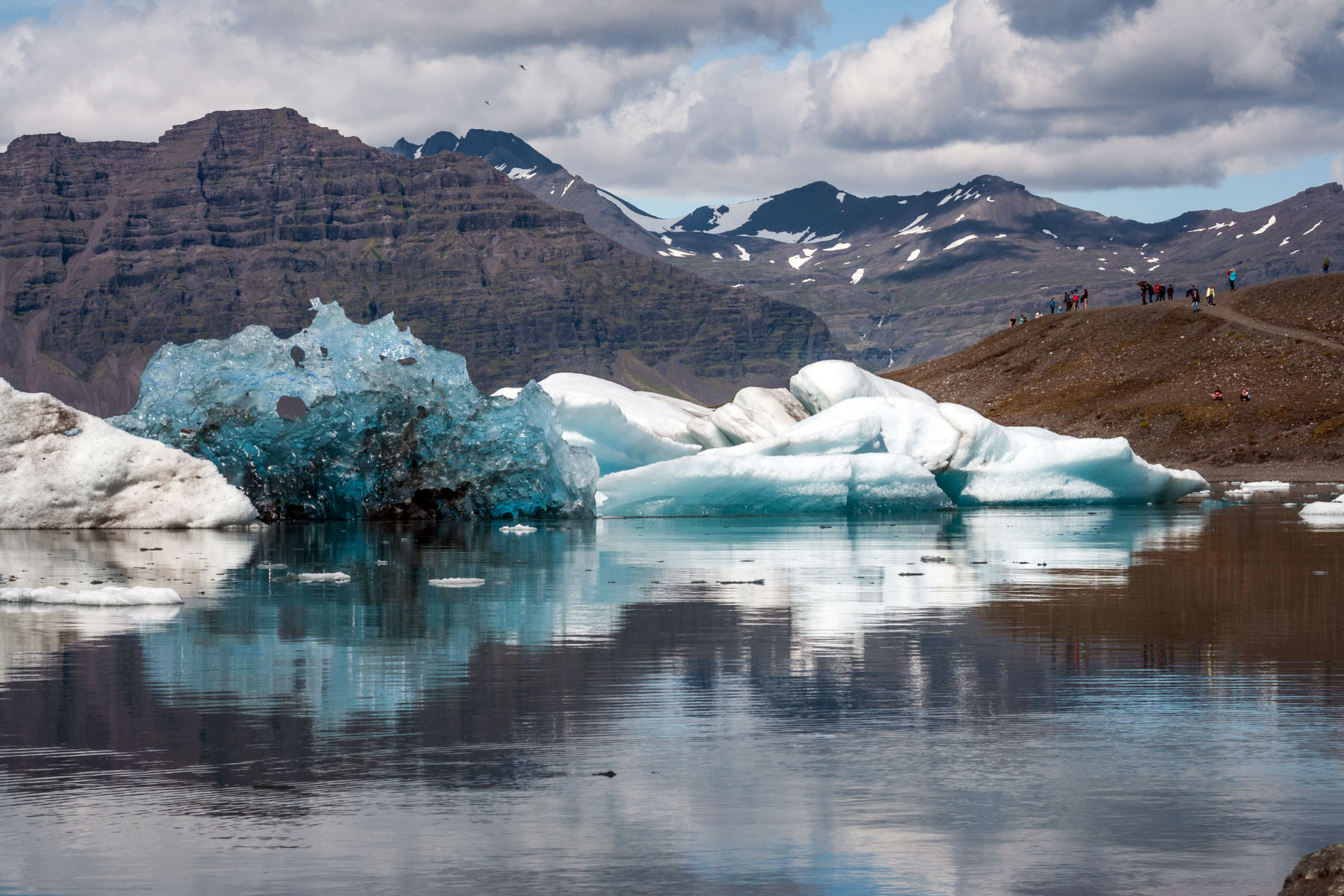 A flipped iceberg in Jökulsárlón (Glacier River Lagoon) in Iceland

Glacial ice goes white because it melts and refreezes enough times to trap air bubbles in its surface, turning it from a luminous blue to a milky blue-white. You can even get green or even brown icebergs, when melting and refreezing traps sediment and organic material.

They Come In Truly Incredible Sizes And Shapes

Just this month (October 2018), a perfectly rectangular iceberg was spotted in the Antarctic Peninsula, so precise and featureless that it looked like a monolith in “2001: A Space Odyssey”.  Nothing but a fluke of nature, cleaving along the rectangular crystalline structure of the ice to a highly unusual degree, but still a startling sight.

However, for sheer punching-the-breath-out-of-you value, nothing beats the iceberg known as B15. At the time it calved off the Antartic’s Ross Ice Shelf in 2000, it was 295 kilometres long and 37 kilometres wide - around the size of Connecticut. 18 years later, pieces of it are still drifting around the world, and in 2006 one chunk was seen 60 km off the coast of New Zealand.

One of the few reasons to ever set foot on a floating iceberg - an immensely hazardous activity at any point in its life cycle - is to check out the wildlife. It’s the perfect haven for seabirds and young sea creatures wanting to avoid predators, and depending on how long it survives (most icebergs last around half a decade, less if they hit warmer waters), it can become a floating micro-ecosystem.

(That isn’t to say that they’re always beneficial to sea life. A grounding iceberg, like the one that got stuck near Innaarsuit’s harbour, can scrape everything off the bottom of the sea and erase decades of marine growth.) 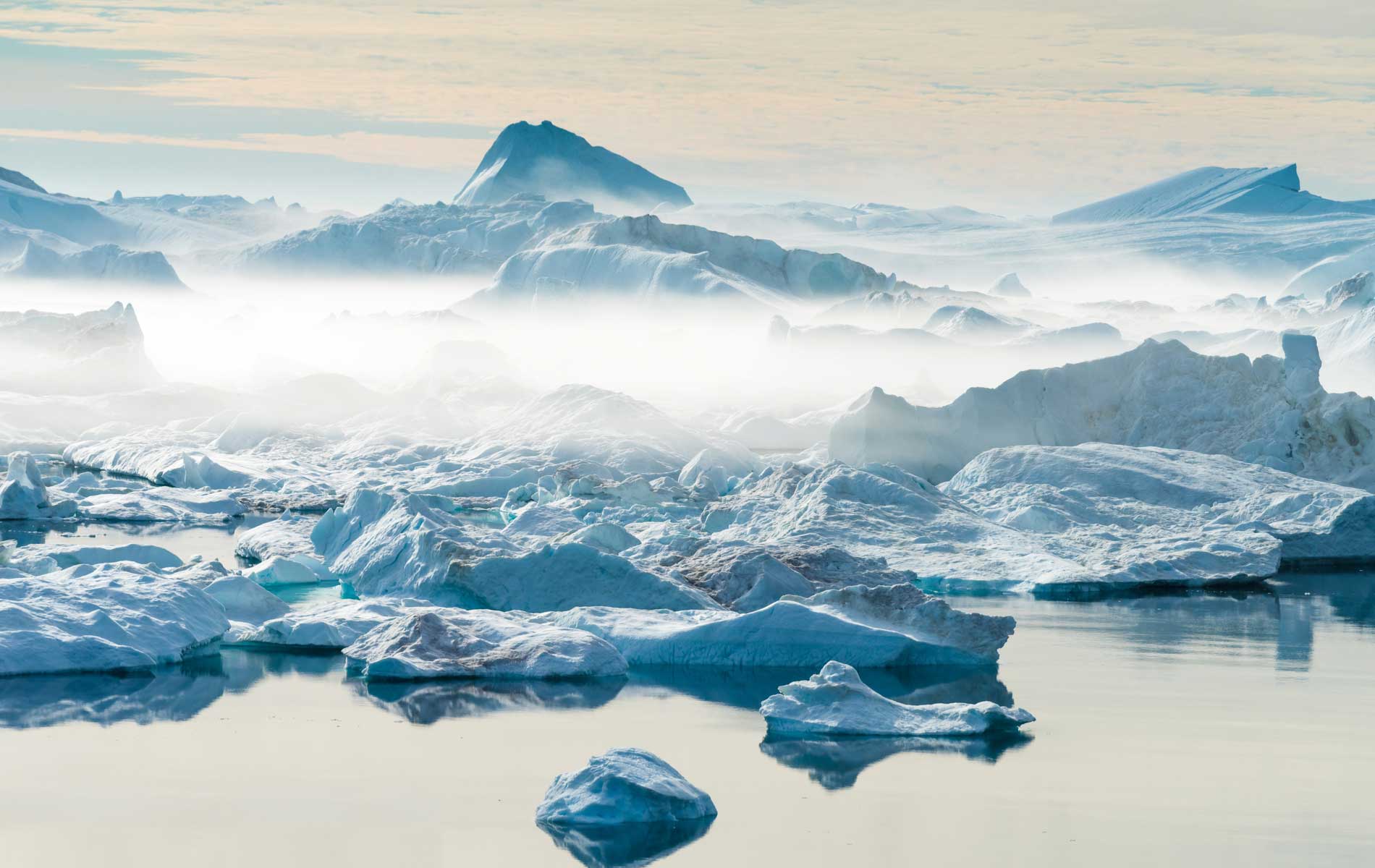 Stranded icebergs at the mouth of the Icefjord near Ilulissat, Greenland

As for the inhabitants of Innaarsuit, they’re riding it out. The presence of the trapped iceberg has impacted supplies and food stocks, including the work of local fishermen.

At last report, the entire settlement is on hold, waiting for their unwanted visitor to become dislodged or break up, and move on, so they can resume normal life again.

As in the rest of Greenland, the ice is in charge, and everything else is forced to react to it, and work around it. That’s the deal Greenlanders make - and it’s always a big one.