A Tale Of Two Venices: How Azerbaijan Turns The Sea Into Home

If you’re in Azerbaijan to see the sights, and you’re wandering along the waterfront of the capital, Baku, taking a northward turn after checking out the city’s famous carpet museum - you’ll find something delightfully weird.

At first glance, it may alarm you a little. Where the roads and paths should be, there’s water - whole boulevards of it, paths of shallow blue-green water, drifting lazily past your feet. What’s happening? Has the sea breached the banks of the city? Is Baku the latest victim of global warming? 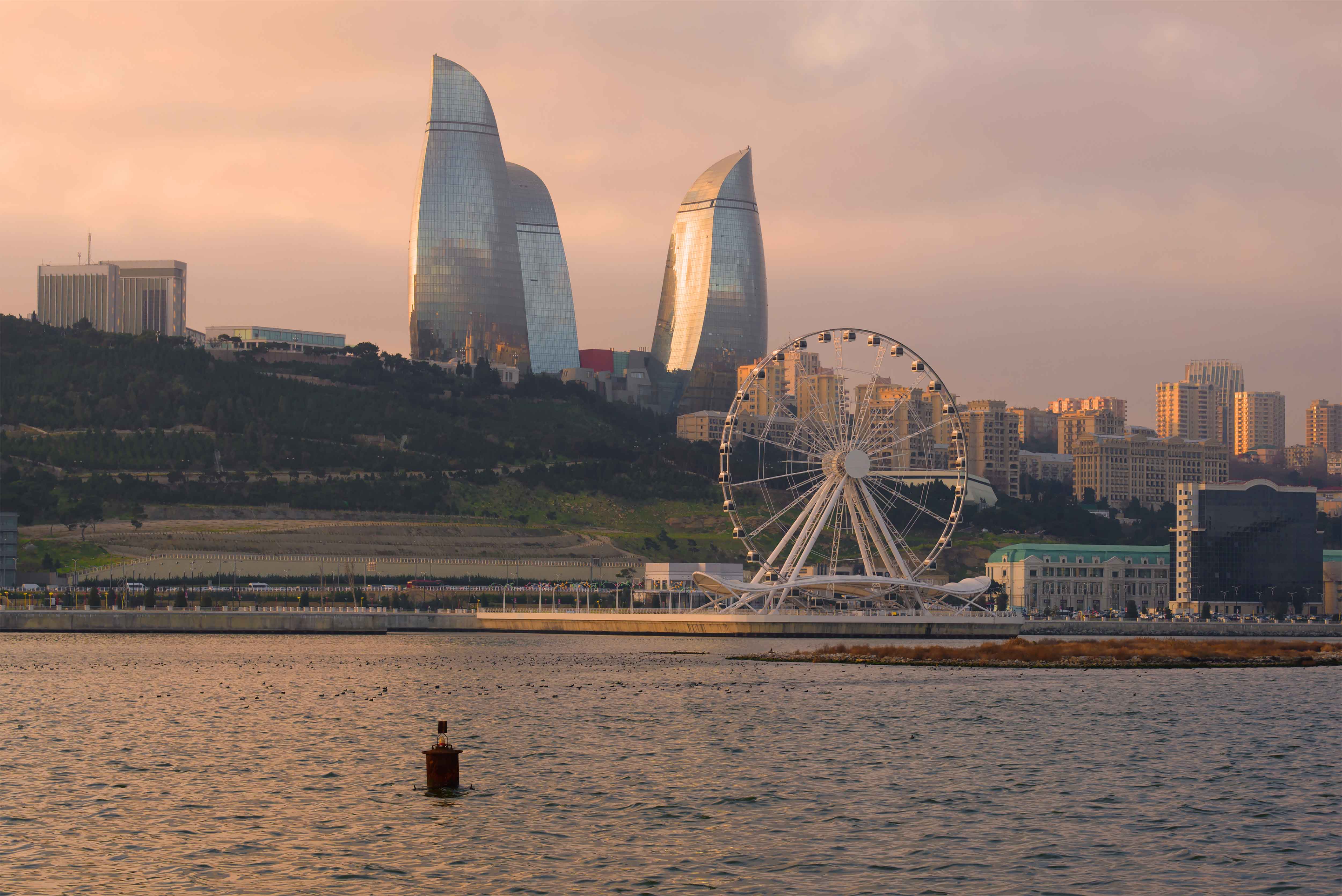 The waterfront in Baku, Azerbaijan, with the Flame Towers in the background

Then you noticed the regularity of it, as precisely laid out as a city block in New York. You see the bridges, beautiful and ornate. You see how spotless everything is, suggesting someone’s keeping it looking as attractive as possible for visitors like you.

Even if you didn’t know the nickname for this part of Baku, you think you know the effect they were going for when they built it - and then a gondola will float past, absolutely sealing the deal.

Baku’s “Little Venice” was designed in the late ‘60s, when the country’s official title was the Azerbaijan Soviet Socialist Republic, a remote outpost of the Soviet Union at its southwestern edge. At that time, tourists were only coming from the east - and come they did, in impressive numbers, until the momentous events of 1991.

It took the country’s tourism industry a decade to recover from the fall of the USSR, but by the early 2000s, city planners were looking around for potential tourist magnets in the city.

Little Venice was a no-brainer. This water-wayed town now covers 10,000 square meters, ferries foot traffic (and gondolas) around two large islands and numerous smaller ones, and features two restaurants designed to offer tastes of the East and the West respectively, as befits the country’s position along the border between continents.

Still, you can’t be blamed for being worried about flooding. In one sense, it’s weird that everything isn’t underwater round here. Wander the streets of Baku (Ancient Persian for “wind-pounded city”) and you are exploring one of the geographical marvels of the human world. 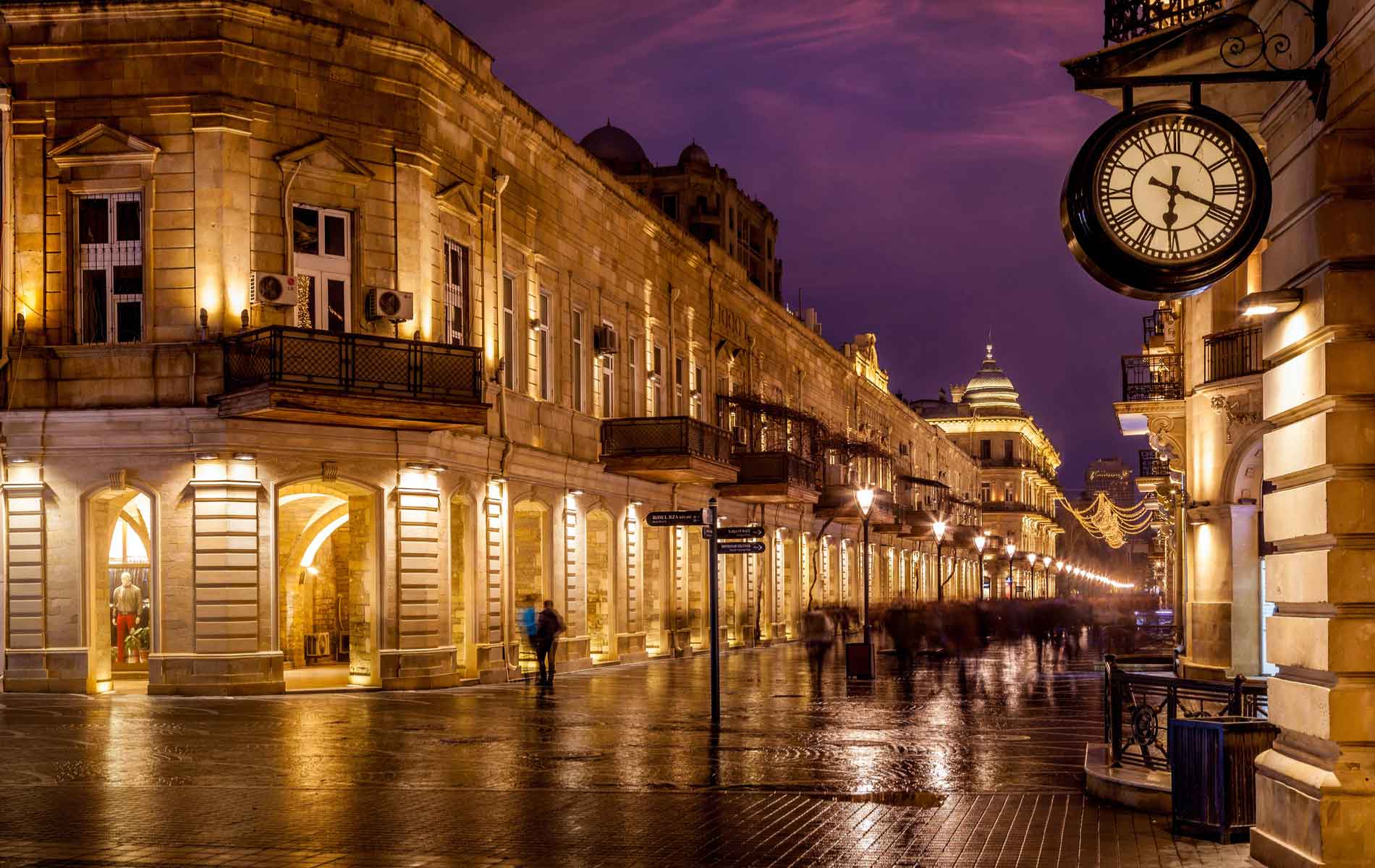 The streets of Baku, Azerbaijan lit up at dusk

If you stand on the harbor's edge and look out over the bay, it looks like any Mediterranean sea port. Except - this isn’t the sea. If this was the real sea, you’d be around thirty meters under it.

Don’t be fooled by the name “Caspian Sea”. Politicians and geographers have been squabbling about the correctness of that term for centuries - but in terms of sea level (which really means “the average height of the world’s major oceans”), the surface of the Caspian Sea is ten storeys deep.

This makes Baku the lowest-lying capital city in the world - and the largest population center in the world that’s this far below sea level.

Yeah, but - it’s a sea, though, right? You don’t call an expanse of water that covers 370,000 square kilometers a lake, surely?

This is the historical question that has fueled dozens of international conferences. Until 1991, the USSR and Iran shared ownership of the Caspian under laws that designated it a lake.

As of August this year, it’s officially something else, to fit a far more complicated modern reality. (The water’s surface allowed freedom of passage for all, like the maritime law that operates at sea - while the sea bed is carved up amongst the five countries that border it.)

The Caspian remains a vital resource for modern Azerbaijan. There’s a relatively fragile caviar industry, built around stocks of sturgeon that dropped dramatically a few decades ago (sturgeon fishing is now regulated and protected). There’s fishing and farming of some of the 850 animal and 500 plant species under the waves. 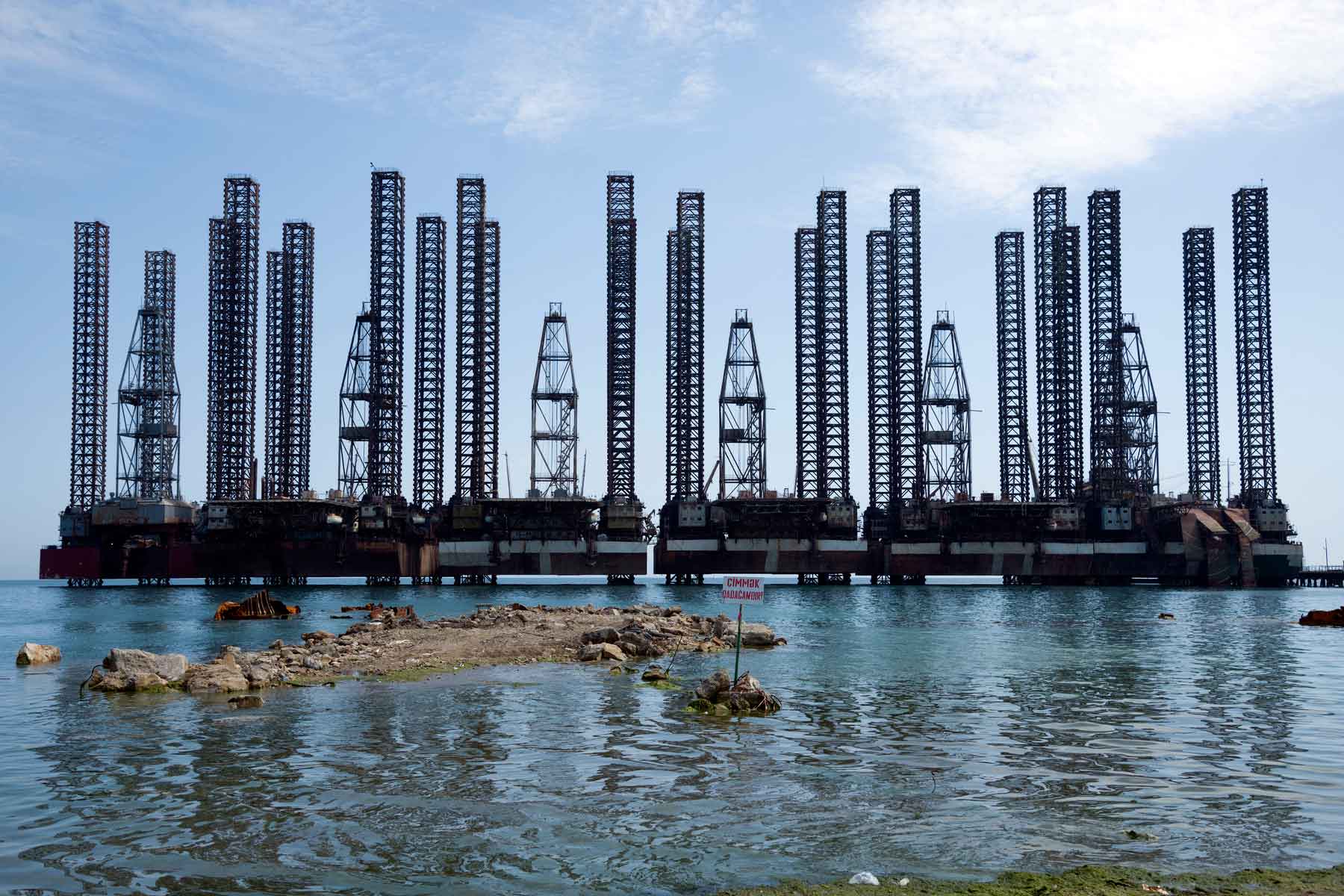 But the Caspian’s value to Azerbaijan, even today, is mostly measured in barrels of “black gold” - and the world’s thirst for oil has created the country’s strangest sight.

Take a boat westwards from the tapering upper coast of Baku, and around six hours and a hundred kilometers into your journey, you’ll find a steampunk Atlantis - a vast expanse of rusting pipes, abandoned oil platforms and smoke-belching chimneys, propped above the waves on the wrecks of sunken ships, and clustered around sprawling, industrial-looking artificial islands.

Welcome to Neft Daşları (“oil rocks”), where many Azerbaijanis came looking for work, and found a home instead.

Oil was found here in 1949, and within the year, Azerbaijan engineers had started work on the world’s very first offshore oil platform. Then it grew - and grew.

There are over 300 kilometers of streets here now, and thousands of oil rigs, many of them now abandoned, the rest chasing the remnants of the oil reserves many kilometers below.

The road network started atop a single pathway out over the water, connecting the richest oil wells with access to the mainland - and in time, it organically sprouted in all directions, bringing hoteliers, restaurant owners, drinking water and lemonade manufacture, bakeries, and all the things that will keep a community housed and fed. Today, around 2,500 people live here.

There’s none of the clean, regular lines of Baku’s Little Venice. It wouldn’t win any tourism awards - and it’s certainly not advertised as the worthy goal of a sightseeing trip.

The only way to get here is to arrange something privately with one of the local oil companies - who, of course, will think you’re completely mad. From the outside, it looks bleak and unwelcoming, a grim Soviet-style vision of industry at the edge of the known world…

But for many, it’s home. They love it here. They have a sense of pride, a love of the people around them, sharing in the ephemeral weirdness of their Waterworld-like existence out here. 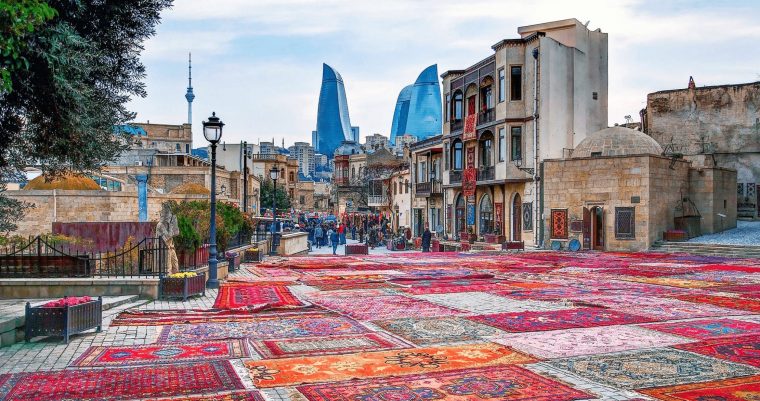 Colourful carpets with a backdrop of the Flame Towers in Baku, Azerbaijan

Where people are brought together, a sense of community grows. Cottages have sprung up here and there, and attempts to bring green life to this drab, oxidized palette of greys, browns and blacks.

Who will be here in a century’s time? No way of knowing. It’d require a level of restoration and repairing that no company has shown any interest in. But perhaps by then, this settlement will have found some other way to support itself.

Venice’s legendary trading network is long dead, and yet there it still stands today. Why not here too?

It may be all change in modern Azerbaijan, as it opens itself up to the world, doubling its numbers of international visitors every decade - but some things never change.

The sea will always be here (even if some people insist it’s a lake) - and with the sea, a sense of home. Some things are meant to endure.

If you're interested in exploring the less-travelled countries of Georgia, Azerbaijan, and Armenia, stay tuned for our fall 2019 program. Full details to be released in early 2019!