There is nothing permanent except Ouzo: A Beginner’s Guide To Greek Spirits

The shopkeeper beckons me off the streets of Rethymno.

I’m exhausted and hungry after a sleepless, breakfast-less night on the ferry from Athens and a bus connection across Crete that was too hasty for me to grab lunch. There is nothing I want more than food right now, and the thought of anything alcoholic hitting my empty stomach brings me out in a cold sweat. 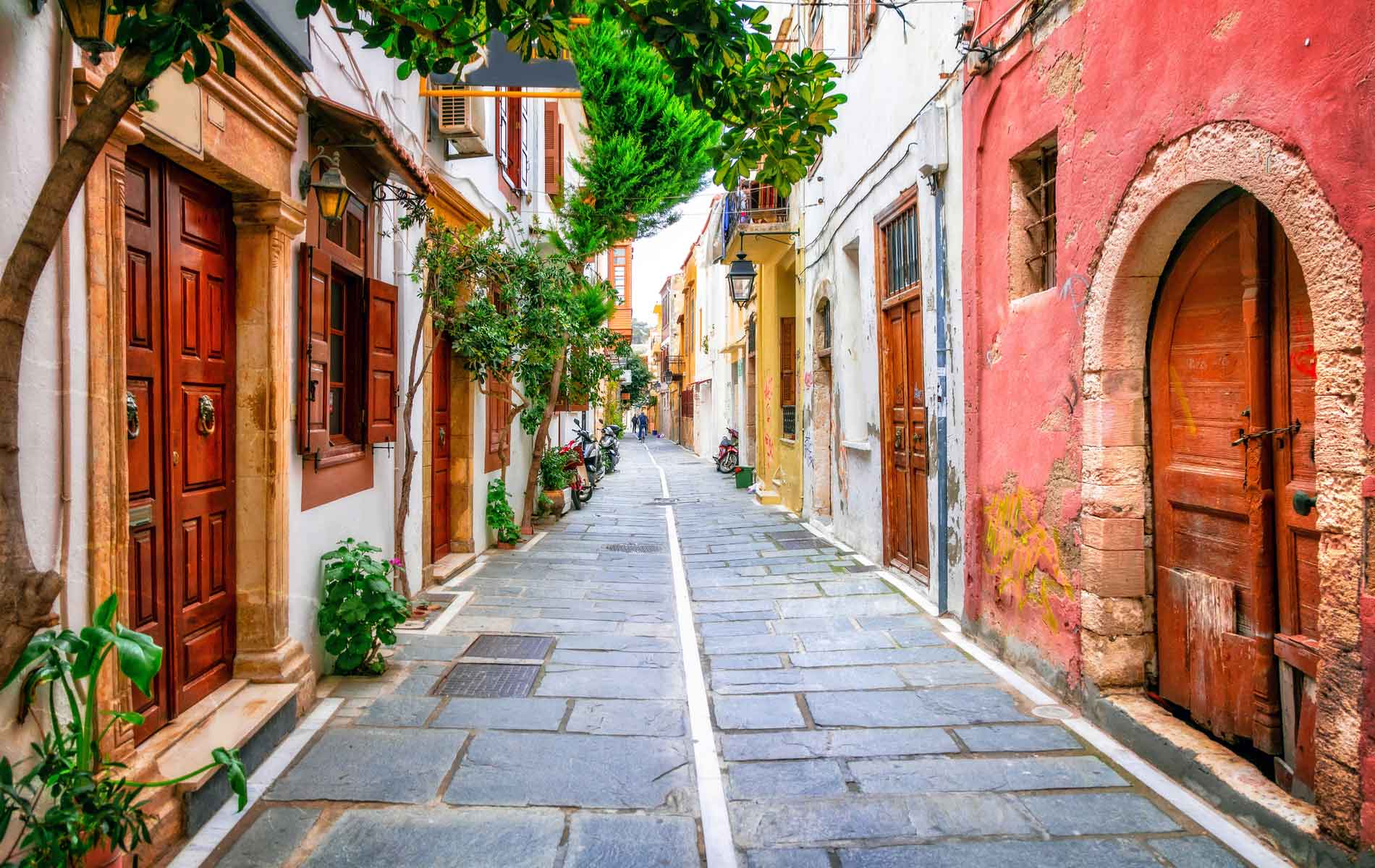 The streets of the old town in Rethymno, Crete island, Greece

Yet here I am, about to sip an unknown amber liquid out of a repurposed lemonade bottle, in a back alley of a small Cretan town. What could possibly go wrong?

The whole store is like this - if you could call it a store. It’s more like a tent with the semblance of a shop front, including an awning. Ever single bottle is a different shape, from plastic Coke bottles to cheap glass decanters, and every one of them is filled with the same orange-yellow spirit.

It’s busy, too - in drawing me in, the shopkeeper has helped me jump a queue of patient patrons. He gestures at the generous taster he’s poured for me.

It’s a Greek spirit called tsikoudia, which in Crete commonly goes under the more foreigner-friendly name of raki (the two are also a little different in how they’re prepared).

This particular variety is called rakomelo, rendered golden by mixing the raw liquid with honey and a little cinnamon.

It makes my eyes water as I lift the glass to my lips - not a good sign - but the taste is exquisite, sweet and slightly spicy, with a deeply warming afterglow that spreads throughout your body and ends at the tips of your ears. There’s none of the savagery you normally associate with raw, potent spirits. 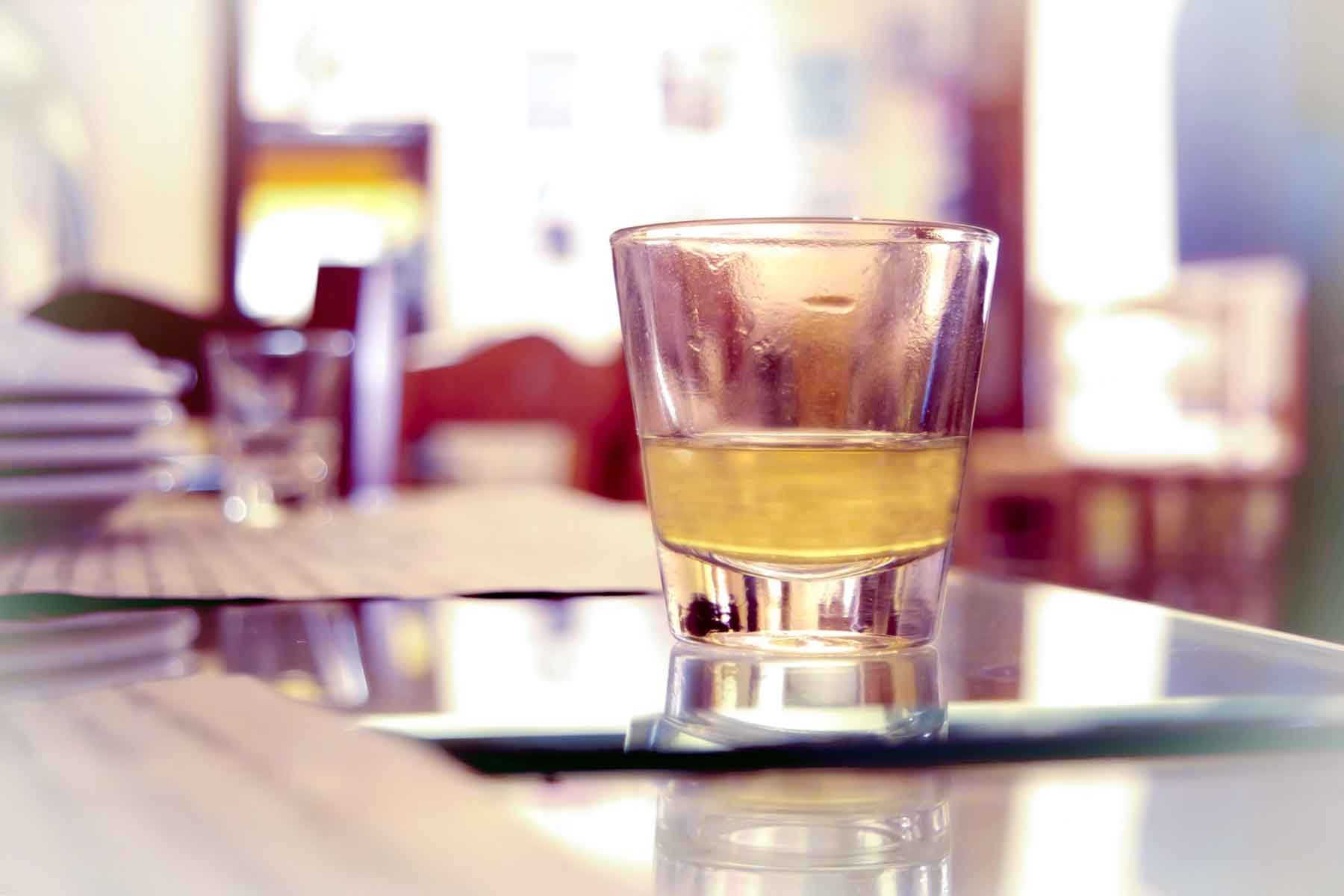 Rakomelo is prepared by combining raki (tsikoudia) or tsipouro with honey and various spices, such as cinnamon

I smile at my host and drain the glass - and the next morning, despite the fact I headed onward to a large dinner and a good night’s sleep, my temples tell me this was a mistake, and add that the 1.5 liter bottle of the stuff that’s now in my rucksack probably wasn’t such a good idea either.

Raki is part of a triad of alcoholic beverages that every self-respecting Greek would put on the table at dinner parties. Raki is regarded as the classic drink of Greece, while on the mainland you’ll find ouzo taking the top spot - but really, you usually find both on offer wherever you go, alongside a licquor called masticha.

If you’re ever served them, treat them like a good whisky - something to be savoured, yes, but also something to treat with respect and maybe a little fear. This is nicely summed up by the “Decalogue of Raki”, a cautionary ditty allegedly authored by someone in Crete:

The eighth brings the police,

The ninth brings the judge,

And the tenth, a funeral. 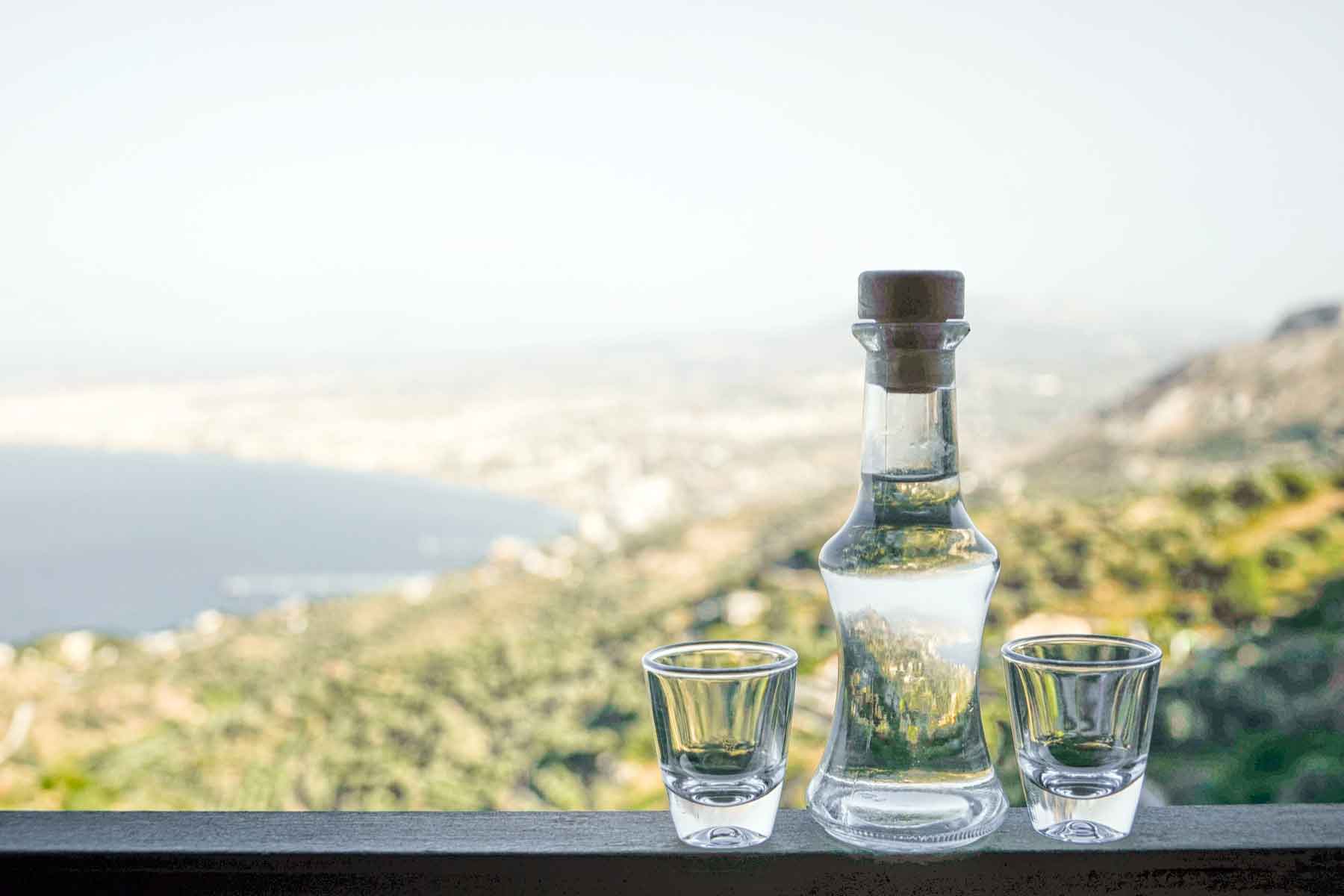 Raki with view at Heraklion, Crete

Raki is made from distilled grape skins mixed with seed and pulp, and in its purest form it’s a 45% proof clear liquid that’s something like Italian grappa.

Greeks probably wouldn’t thank you for saying so, but the name probably came via a similar drink in Turkey (which like tsikoudia is usually flavoured with anise, while raki usually isn’t), and is itself derived from the Arabic word arak (“distilled”).

More popular to the north of Greece is ouzo, which retains all the aniseed flavours of its Turkish counterpart. It’s a relatively new drink, originating in the 19th Century, but one that’s proudly proclaimed to be “the drink of Greece” for its early ties with the Greek independence movement.

There are many ways to drink ouzo, but here is my preferred one: ask for a separate glass of water, and drip your ouzo into it until the liquid turns cloudy white with a faint blue hue.

Take a few sips and wait ten seconds. If entirely pleasant things happen to your mouth and you don’t get a sudden urge to, say, claw at your throat or lick the carpet you’re standing on, you’ve got the strength right. Please continue, albeit gingerly.

The best time to drink ouzo is with a meal, and with a certain amount of that meal in your stomach already. If you’re in a Greek restaurant, it’ll come with your mezze, and it’ll be really cold. 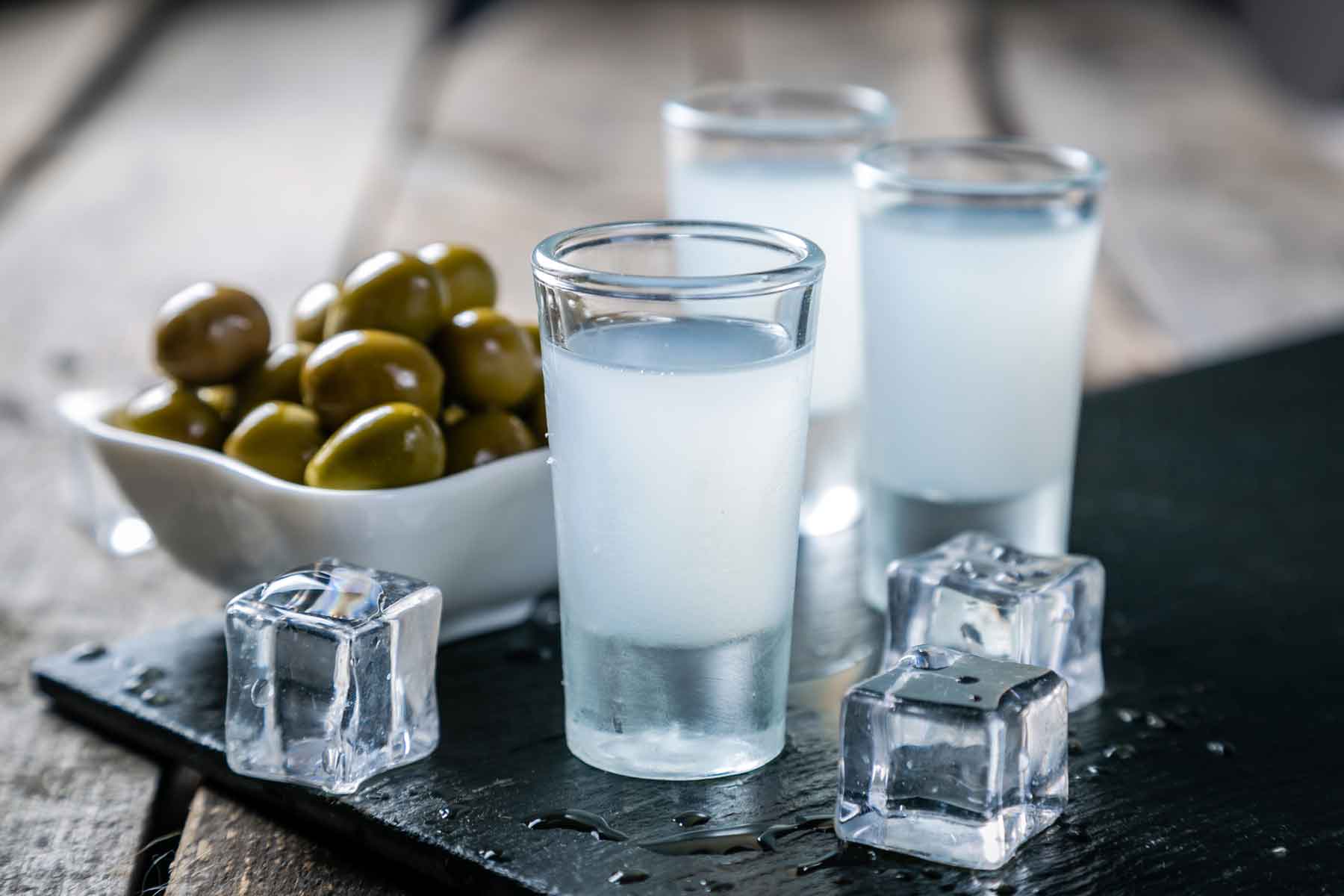 (My first shot of ouzo in Greece looked so much like a cold glass of water that I drank half of it neat, before realising my terrible mistake. When I stopped coughing and sobbing, the entire restaurant was looking at me. Please don’t do the same.)

For something more refreshing, ask for a glass of masticha (also called mastika), which is a clear drink with a pine-like taste. It’s used interchangeably with ouzo, as an aperitif or accompaniment, and it’s sometimes mixed with a mint licquer to make a cloudy-looking cocktail.

It’s probably best to just drink masticha and not inquire too deeply into how it’s made, since it gets its name and intense flavour from a form of tree gum that’s traditionally used to improve dental hygiene and prized for its antibacterial and antifungal properties.

Best skip the label on this one, and enjoy its palate-cleansing freshness. You’ll also find it outside Greece, due to its popularity in Bulgaria, Romania and the Republic of Macedonia. 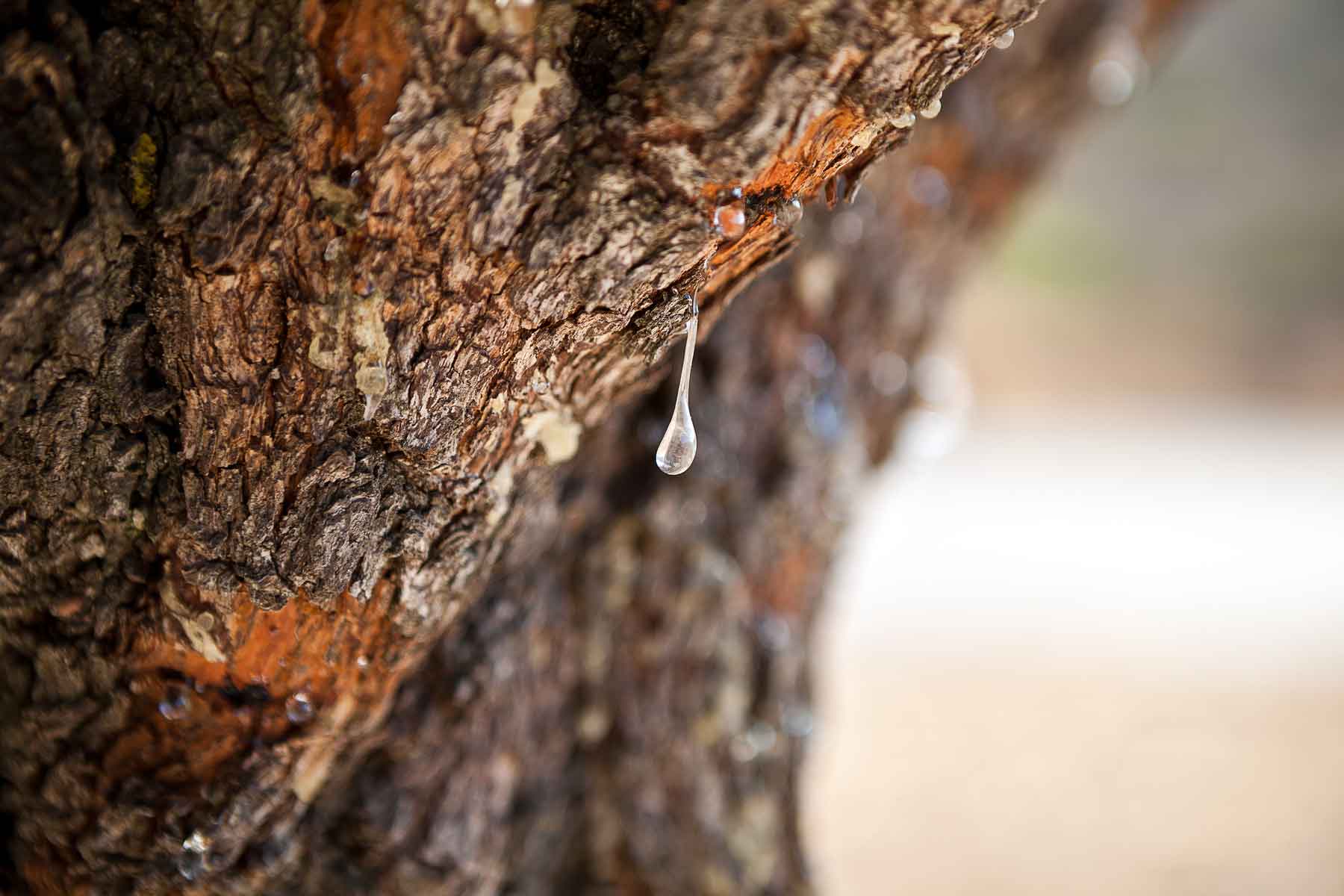 A mastic tear on a mastic tree, from which Masticha is produced

I’m back in Athens before I’m brave enough to unscrew the bottle-cap on my 1.5 litres of Rethymnon rakomelo. But it’s okay - I know the secret to Greek licquor now.

Lots of water, something to eat, and the time to enjoy that spreading warmth - the perfect drink for a few hours sitting on a balcony chair, working your way through a humongous bowl of olives, and picking through your Lonely Planet guide to Greece to plan your next move.

A bottle for the road indeed.