Mediterranean Liquid Gold: Why Extra Virgin Is So Much More Than “Good Olive Oil”

My new friend, a chef who clearly has strong feelings about the flavour of olive oil, grabs one of the tiny cups, pours out an inch of dark green liquid, and takes an absurdly loud sip.

“You need to introduce air into the oil, break it into bubbles,” his assistant says, as the chef continues making a noise like a vacuum cleaner that’s swallowed something it shouldn’t have, and points for me to do the same.

Okay. I usually put this stuff on salad, but let’s give it a go. 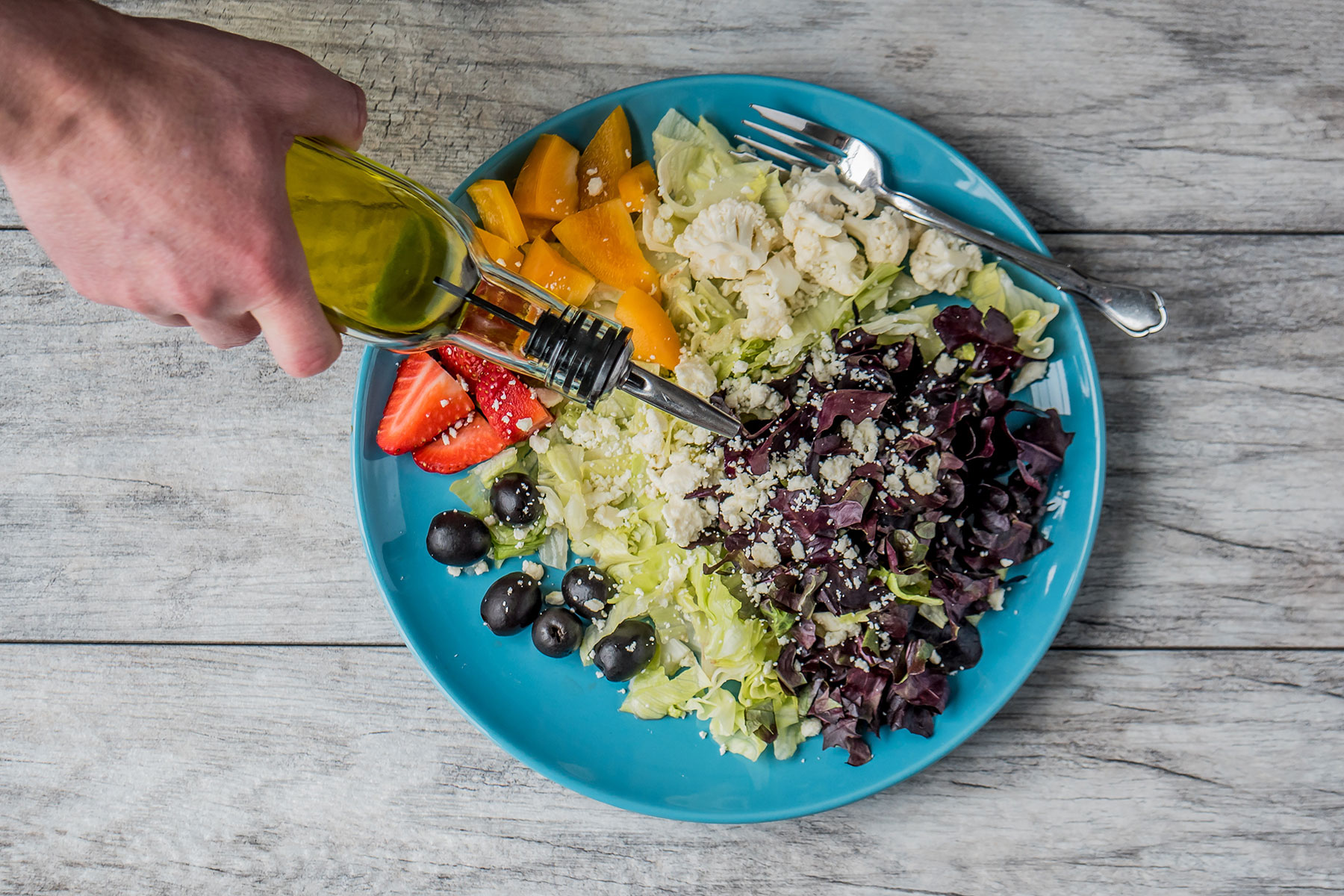 I pour a finger, take a sip, self-consciously make the same Boeing-747-taking-off sound for a few seconds, swallow it to the back of my throat - and burst out coughing, to the amusement of all.

You can’t mistake really amazing olive oil. The first time you have it, your eyes will roll back in your head, your tongue will flood with flavours and sensations that you’d rarely associate with what you normally regard as a lowly cooking lubricant, and you may even hear distant Italian opera, or perhaps the soundtrack to La Dolce Vita.

Some of these will be entirely subjective experiences, but that’s absolutely okay. This whole deal is subjective. Everyone has their own special olive oil, the same way we gravitate towards that one wine that’s just perfect, or love that particular cheese that has everyone else gagging and throwing open a window.

By best, of course, I mean EVOO, or Extra Virgin Olive Oil. There are many other types, including the ones you cook with, but generally speaking, the “lesser oils” (if we’re going to get sniffy about it) are an entirely different beast.

It’s also unfortunately true that a lot of what is sold on shelves around the world as “top quality EVOO”...isn’t so much. To be guaranteed of the really good stuff, you either have to go shopping armed with a lot of knowledge (here’s a good tip) - or you should just go to the places it’s produced, and buy it at source. 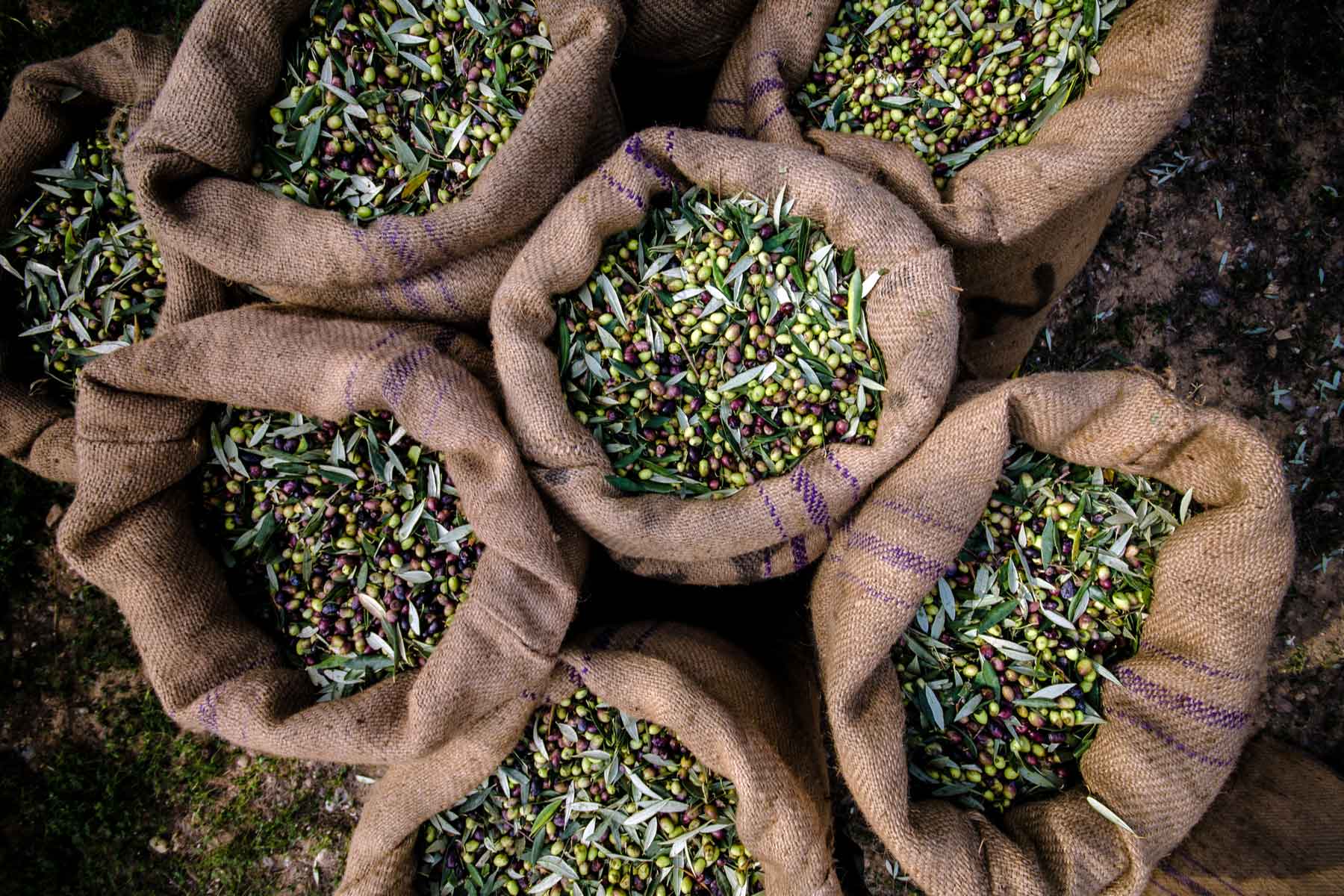 Harvested fresh olives in sacks in a field for olive oil production in Crete, Greece

Olives are enduring associated with the Mediterranean (although California, Oregon and Hawaii are making inroads into the industry). There were people eating olives around the Mediterranean basin as long ago as the Neolithic (10,000 years back) - and the earliest signs of olive cultivation come from the Greek island of Crete and are dated to 4,500 years ago.

It’s not yet known where wild olive trees originated - maybe in Asia Minor, maybe in mainland Greece - but once it arrived, it stuck. It’s true that Olea europaea now grows wild in many places outside Europe, including in China and Argentina, but it certainly seems to prefer the particular environmental conditions of the Mediterranean: bountiful sunshine, thin chalky soils, not too much rain (they handle drought far better than flooding), and a lack of hard frosts.

Ancient peoples were quick to squeeze every use out of this unusual fruit (yes, it’s a fruit, although with its bitter taste in raw for, it’s easy to assume it’s a savoury vegetable).

It soon became part of the “Mediterranean Triad”, the three crops that underpinned the diet in every bordering country (olives, grapes, wheat) - but it didn’t stop with the food.

It’s quite possible that the modern world has forgotten some of the ways olive oil was used by past civilizations, but here are a few we’re still aware of: liquid money, rites of sacrament, machine lubricant, lamp oil, ear cleaner (a couple of drops of warmed oil tricked into your ear can work wonders, I can attest from personal experience), hair volumizer, skin moisturizer, arthritis treatment - and frankly, who knows what else.

The Romans loved olive oil so much they washed themselves in it. Where today we might use a flannel, sponge or loofah, the Romans used a curved wooden or metal stick called a strigil, which they used to scrape the dirt out of their skin after steaming it and applying a layer of oil to their skin.

Along with general cleanliness and presumably a pleasantly fruity aroma, oil helped keep their skin moisturized - particularly useful for the Romans at the colder, wind-chafing fringes of the Empire. 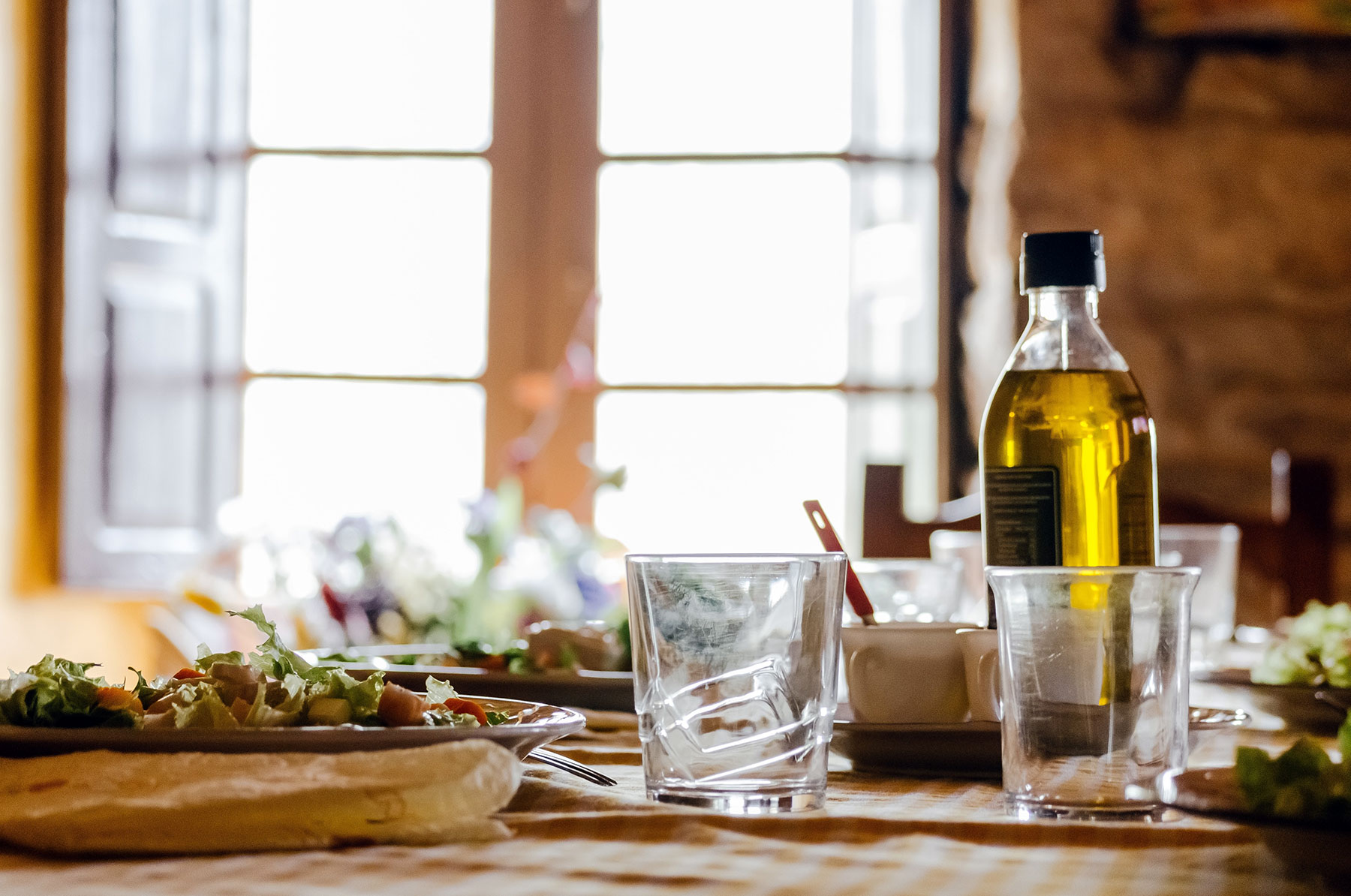 Olive oil on a dinner table

The better-quality the oil, the better the results - and for a change, “better-quality” doesn’t equate to “more refined”. Extra virgin olive oil is what you get when you do the least amount of work to an olive - which means, yes, you’re paying extra to get the oil that’s technologically the easiest to produce.

First, temperature. If you heat an extra virgin olive oil, you will kill the flavour. If you’re planning to head to Italy and want to pick up a few bottles to bring home, make sure you store them in a cool place at all points of your journey.

The best oil is so sensitive to heat that the olives themselves are pressed cold, so the oil contains a number of unrefined particles that would burn away upon heating. These particles are as much part of the unique flavour as the type of wooden barrels that whisky is matured in. This is where the amazing, amazing flavour is. Apply heat, and that flavour will vanish.

(Also, extra virgin oils start to smoke at much lower temperatures, which is another reason why they’re a poor choice for most forms of cooking, particularly frying.)

Then there’s the ripening process. The olive have to be cold-pressed at exactly the right time: too ripe, and the oil will sweeten dramatically and maybe even taste a little rancid, while picking them too early will render the taste bitter and smoky. (These are all flavours that largely vanish during the refining process for lower-quality oils, so extra virgin production is where timing is critical.)

And of course, there’s the place. It’s not just down to the country, whether you’re in Greece, Spain or Italy.

Olive oil is a regional thing, just as much as wine is. You may notice broad differences between, say, Spanish oils and Italian ones (the former are more of a lighter yellow, and generally taste a little nuttier; the latter darker and greener with a more herbal tang) - but as you train your palate, you’ll taste the differences in the landscape it grew from, combined with differing local production techniques and all sorts of other factors.

Take this olive oil I’m spluttering my way through, air-bubbles and all (which are designed to scatter those tiny particles that give extra virgin all its flavour). I’m in the walled city of Orvieto, an Italian acropolis perched on an ancient volcanic outcrop, and I’m the guest of a restaurant as part of a blog trip, and the oil I’m drinking belongs to the region of Umbria. 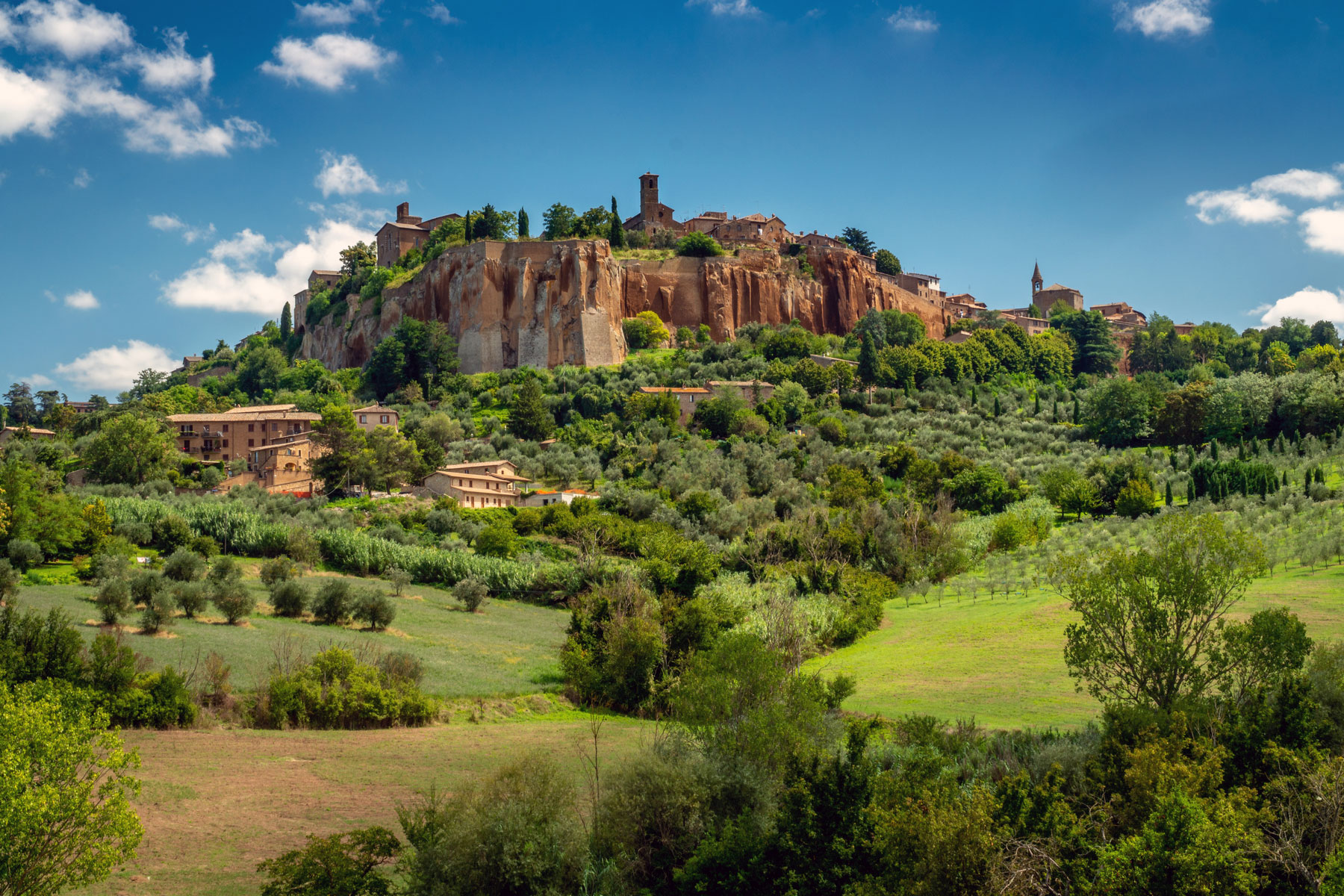 The walled city of Orvieto in Italy's Umbria region

This particular oil could come from one of five regional sub-zones, and be made from a blend of six sub-varieties of olive (Moraiolo, Frantoio, Leccino, San Felice, Pendolino, Agogia).

Wherever you go in Greece, Spain or Italy, you should ask about their oil. Ask to try a sample, or if there’s a bottle on the table (and it’s labelled, so you know it’s locally produced), pour a little and take a sip. Churn the oil back and forward in your mouth, through and around your teeth, and then let the flavour settle against your tongue and throat.

It might not look like it at first sight, but extra virgin olive oil is a masterclass in “going local”. It’s a terrific way to get your hosts talking. It’s a topic that will teach you history, economic, geology, the uneasy melding of traditions with modern commercial pressures. It will teach you all sorts of things, and lead to all sorts of conversations if you let it.

But first, pour the remainder of what you sipped onto your plate, grab a piece of bread, mop it all up, and take a big, delicious bite. Because that’s what it’s really for, right?

If you'd like to the chance to get some of Italy's best olive oil right from the source, join Wheel & Anchor for our Tuscany, the Amalfi Coast, and Sicily program!