A cruise down the Canal du Midi: What makes it a great journey?

Seventeenth-century French tax collector Pierre-Paul Riquet proposed the construction of the Canal du Midi in the Languedoc region in Southern France to aid in the transportation of goods like wine, wheat, and textiles. Transportation of these and other goods was slow and expensive by land, and creating a waterway that would connect key trading ports in southern to northern France seemed like an excellent idea.

King Louis XIV saw the economic payoff of the proposal and approved its construction. Sadly, Riquet didn’t live long enough to see his brainchild serve its purpose, but it was undoubtedly a triumphant endeavor. People in the 21st century will continue to reap the benefits of the Canal du Midi for years to come.

At present, the canal is no longer used for trade but largely for tourism. If you’re planning to take a journey down the Canal du Midi, here are a few reasons why it could be great. 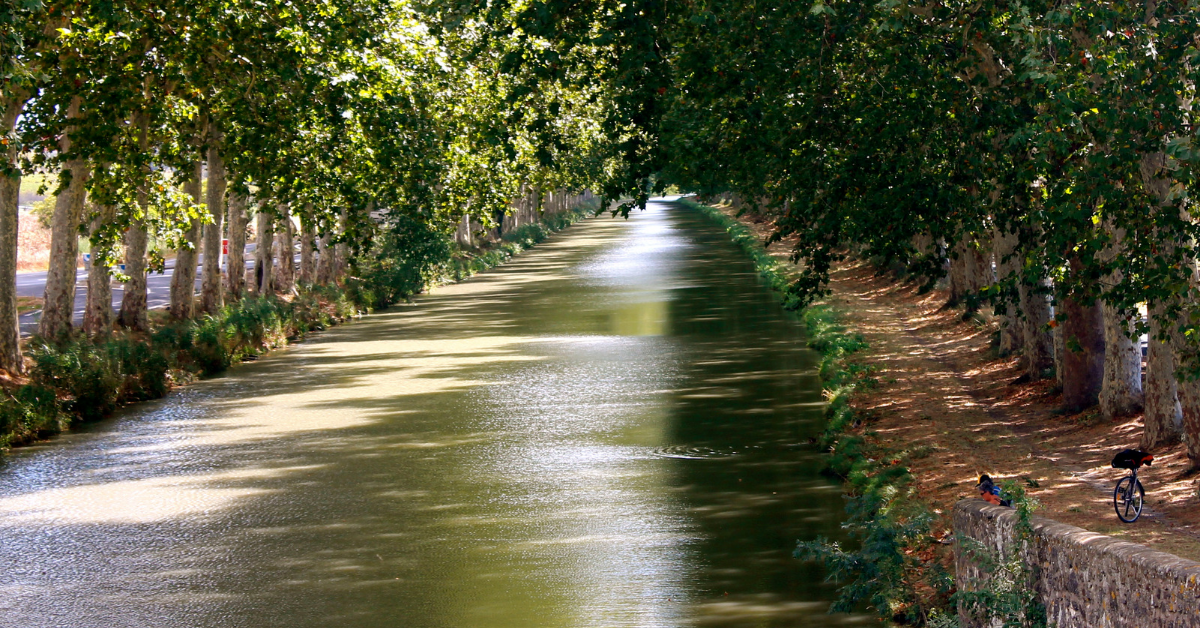 Barge cruises aren’t your ordinary cruise. A barge cruise doesn’t even sound alluring until you get on one and see how much of it is similar to checking in at a four- or even five-star hotel. But instead of being on solid ground, you’re on a barge snaking along a picturesque waterway.

If taking a luxury cruise aboard what used to be a cocoa barge isn’t thrilling to you, then maybe the cozy accommodations, the magnificent views, the convivial atmosphere, and the impeccable overall cruise service will. There are cruises that accommodate only a fair-sized number of guests, the better to make your trip relaxing, cozy, and uncrowded, but no less satisfying.

Hopping aboard a barge cruise is one of the best ways to see one of Southern France’s mesmerizing countryside. And the great news is you barely have to lift a finger. Delectable meals are prepared for you, and there are several leisure activities — biking, visiting markets, discovering out-of-the-way towns, or simply exchanging stories with the company of like-minded travellers — you can do as you please.

There are more than 250,000 trees planted along the canal banks, so wherever you look, there are plane and cypress trees, sunflowers, and in all likelihood, fellow admirers of the canal, walking, running, or cycling near the towing path. Whatever form of leisurely pursuits you indulge in, take the time to savor the experience. You likely wouldn’t be in any hurry to get anywhere, anyway.

The Canal du Midi is located in the Languedoc region, which is also worth exploring. While in the region, take the opportunity to see towns like Narbonne, which attracts visitors for its popular covered market. It shows off Southern France’s richest produce — cheese, pâté, leather goods, and more. Wander around its medieval streets, drop by at wineries (there are many vineyards within the region), or visit the Cathédrale de Saint-Just et Saint-Pasteur, a Gothic cathedral constructed in the early 1300s. 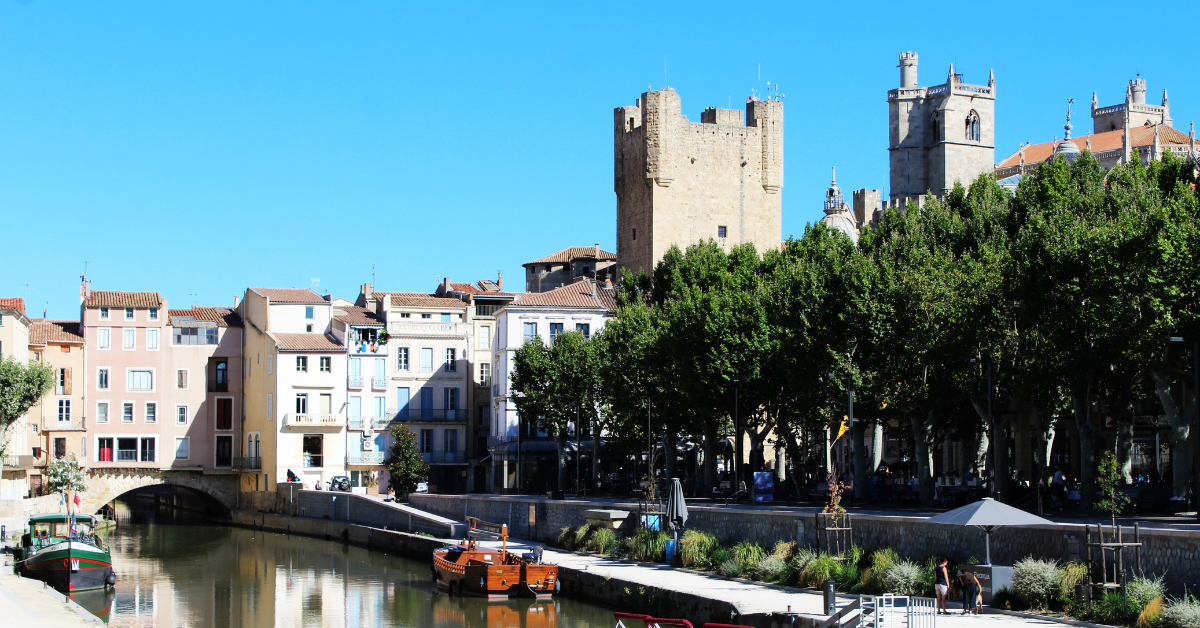 Town of Narbonne in France

Carcassonne is also a must-see town famous for its medieval fortresses like La Cité and Chateau Comtal, and its numerous vineyards. In the southernmost area and within walking distance of the Canal du Midi, the town of Marseillan also makes for a worthy stop.

Getting the Canal du Midi to open and become fully functional was a journey in itself. Now, tourists traverse one of France’s most historic canals for journeys of a different kind. And if you’re one of those travellers who want slow, languorous rides in calm waters, cruising along the Canal Du Midi is sure to spice up your tour of Southern France — miles away from the crowded, bustling tourist regions. 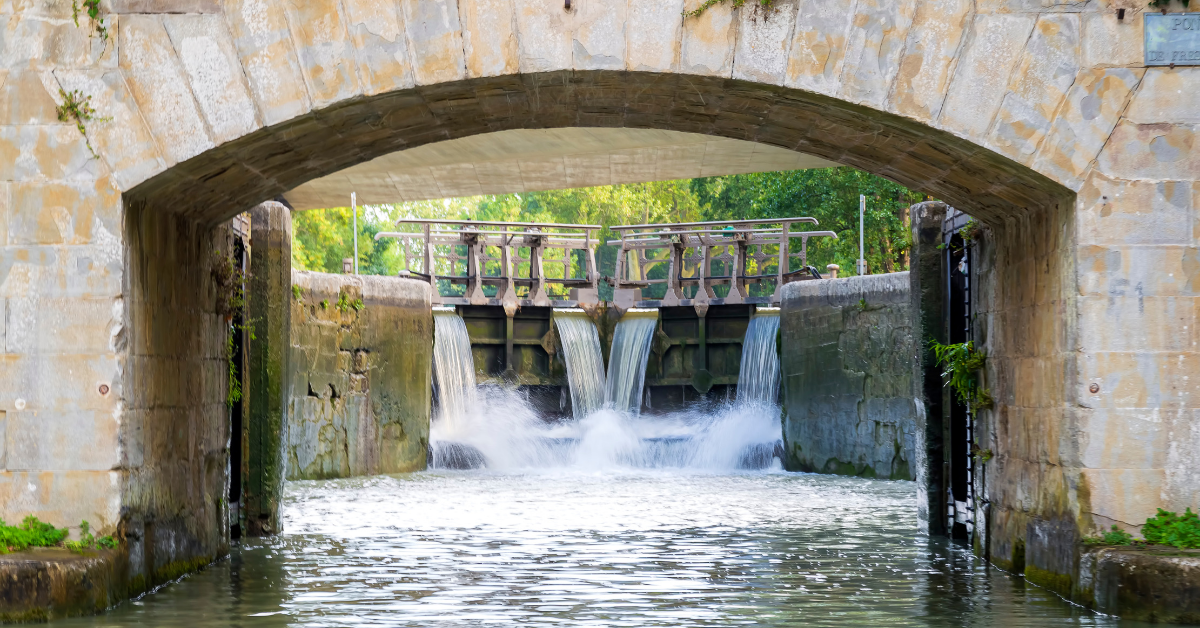 Lock on the Canal du Midi in France

If the thought of seeing an endless stretch of green, orchards, medieval churches, and picturesque countryside for days is unappealing to you, fret not. Journeying along the Canal du Midi also lets you see marvelous feats of engineering.

Barge cruises travel through locks, devices that are used to raise and lower boats and other water vessels passing through the canal. To some people, it may appear like a towering obstacle, but it seldom is. In fact, travelling through one of the most popular locks, the Locks at Fonserannes (also known as the “staircase of locks”), is a highlight of a cruise in the Canal du Midi. Boat captains have mastered fitting their vessel into the locks, and for the sightseers around the staircases, seeing boats narrowly make its way through the lock is a source of entertainment and amazement.

And if you’re aboard a cruise barge, your captain would likely assure you that all you need to do is watch the spectacle of opening the locks and relax.

Does a languid luxury cruise down the Southern French countryside sound like a trip you would take? Subscribe to the Wheel & Anchor weekly newsletter to get the latest updates on our upcoming tours and programs. Or join our community of passionate travellers today.