Vacationing in Scotland? Consider the remote Shetland and Orkney Islands

There are 790 offshore islands nestled between and around Scotland’s four main island groups, Shetland, Orkney, the Inner Hebrides, and the Outer Hebrides. Plenty of these islands are worth exploring, but Edinburgh remains the largest tourist destination in Scotland and the second-largest in the UK, next to London.

Tourists can hardly be blamed; the Scottish capital is a fantastic holiday destination. If you’ve been to Edinburgh, you’ve seen its marvels: towering castles straight out of children’s storybooks, mesmerizing architecture, historic statues and sculptures, and a popular spitting spot — all while locals and tourists go about their day.

However, if you have more than just a couple of days to spend, touring the remote Shetland and Orkney Islands are terrific alternatives to enchanting Edinburgh and cool and modern Glasgow.

Journeying to one of the northernmost isles of the UK may not initially seem appealing. Shetland is so far up north that it’s much closer to Norway than mainland UK. For some, that’s a good reason to go. Shetland was formerly under Norse rule, so Viking traditions are still observed. In 1469, Shetland became part of Scotland when it was handed over as dowry for the Danish Princess Margaret’s marriage to James III of Scotland. 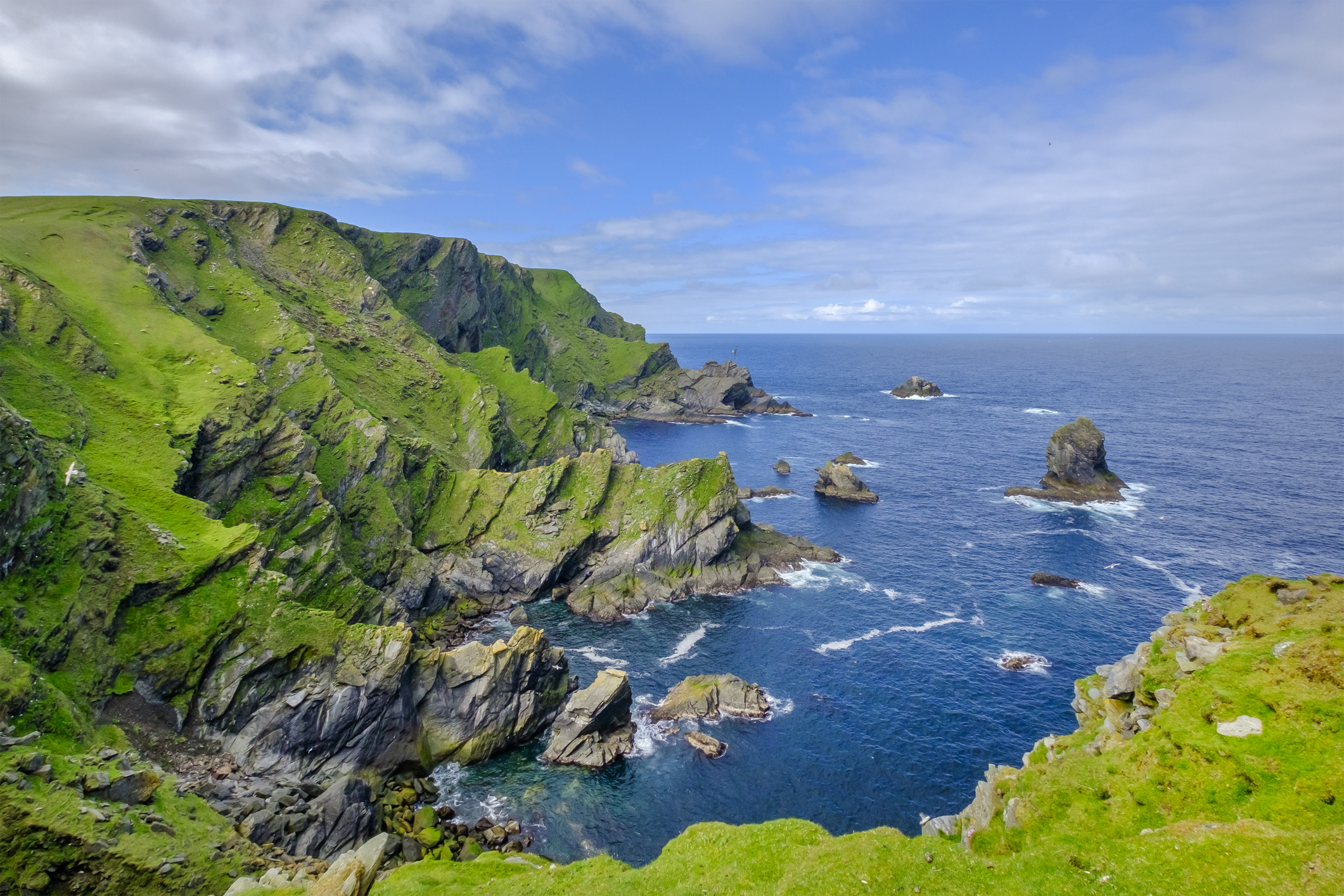 Mentions of monarchs and Viking traditions are inevitable while in Scotland. The country has a turbulent history, so you can expect engrossing tales about kings, queens, princes, and princesses while you tour famed Shetland castles like Muness Castle, Castle Holm, or Scalloway Castle.

The picturesque sceneries are also another reason to visit the underrated Shetland islands. See spectacular windswept landscapes, stone dwellings and ruins well preserved by nature, and empty and unspoiled beaches such as St. Ninian’s Isle, an ideal spot to see one of the largest two-sided beaches in the UK.

If you prefer the bustle of the city, all the creature comforts you could want are available in the capital, Lerwick. This is an ideal point from which to go on excursions to sea caves and the outskirts of the islands to watch rare bird species like puffins and gannets, or spot Shetland ponies.

You can also take a trip to the edges of Lerwick, specifically in the Clickimin Loch, a compound of stone-built round houses unique to Scotland. These astonishing feats of stonework show proof of very early settlements in Shetland.

Equally intriguing and worth a quick stop is Fort Charlotte, a well-preserved area with a fascinating story behind it. The fort was built in the second half of the 1600s to protect British territory against Dutch invaders. The fort, however, proved inadequate as the cannon installed were too small, the water supply was scarce, and the construction of the walls was left unfinished. If you take a visit, you’ll see the fort largely unchanged from what it looked like in the 1600s.

Like many less popular destinations, the Orkney Islands in Northern Scotland remain mostly under-explored. This is clearly an injustice because there’s just as much to love here. What makes this archipelago of 70 islands a fascinating visit is not just its supposed inaccessibility but because ancient sites and delightful hikes await the intrepid traveller.

The largely uninhabited Orkney Islands are home to some awe-inspiring Neolithic sites in Europe. These sites, known as the “Heart of Neolithic Orkney,” became a UNESCO Heritage site in 1999. Marvel at the stone circles, ceremonial, and burial sites older than the Egyptian pyramids and Stonehenge. It’s a great destination for those who are fascinated by history, wildlife, flora and fauna, and...seals.

Don’t miss Skara Brae (“Scottish Pompeii”), discovered in 1850, after a powerful storm unearthed it from a huge mound of earth. This well-preserved prehistoric settlement consisting of stone slabs offers a fascinating glimpse into village life in prehistoric times. Give or take a few more ferocious storms, more stone buildings just might emerge from this already intriguing area.

The Ring of Brodgar is also stunning: picture stone circles in the Heart of Neolithic Orkney, impeccably arranged as if for a photo shoot. There are currently 13 burial mounds and 30 towering stones where there used to be at least 60. These stones are dramatically constructed as if intended to put the earliest inhabitants and current visitors in a spellbinding daze.

Kirkwall, the capital of Orkney, is rich in culture and history and is certainly worth a visit. Meander around this charming 11th-century town teeming with restaurants, cafes, museums, and pubs along its charming pathways and narrow main streets. Peek at St. Magnus Cathedral, a relic from the Viking era that charms visitors looking for a sanctuary of warmth, inspiration, and calm.

Cap off your exploration with a visit to a distillery and sample some fine, flavorful Scottish whisky or Scotch. You’re in the land of whisky, so drink up.

Wheel & Anchor’s tour of Scotland in 2020 can take you to these remote but spectacular Scottish islands. It’s the perfect time to discover what makes Shetland and the Orkney Islands such stand-outs. Ask us for more details.