Norway: What’s It Like To Live Under The Midnight Sun?

It’s late in the day, and the sun is low in the sky. Oblique sunlight casts shadows across the magnificent rocky landscape all around you, deepening the blue of the sea into a wine-dark purple, the snow-streaked mountains into creamy shades of pink and yellow, the sky into colours that promise a really magnificent sunset.

The sun is almost gone, and you stifle a yawn. It won’t be long before bed.

But instead of sinking down into the sea in a blaze of fire, our nearest star hovers - and moves in the wrong direction. It swerves sideways, crawling along the horizon much faster than it moves towards it. 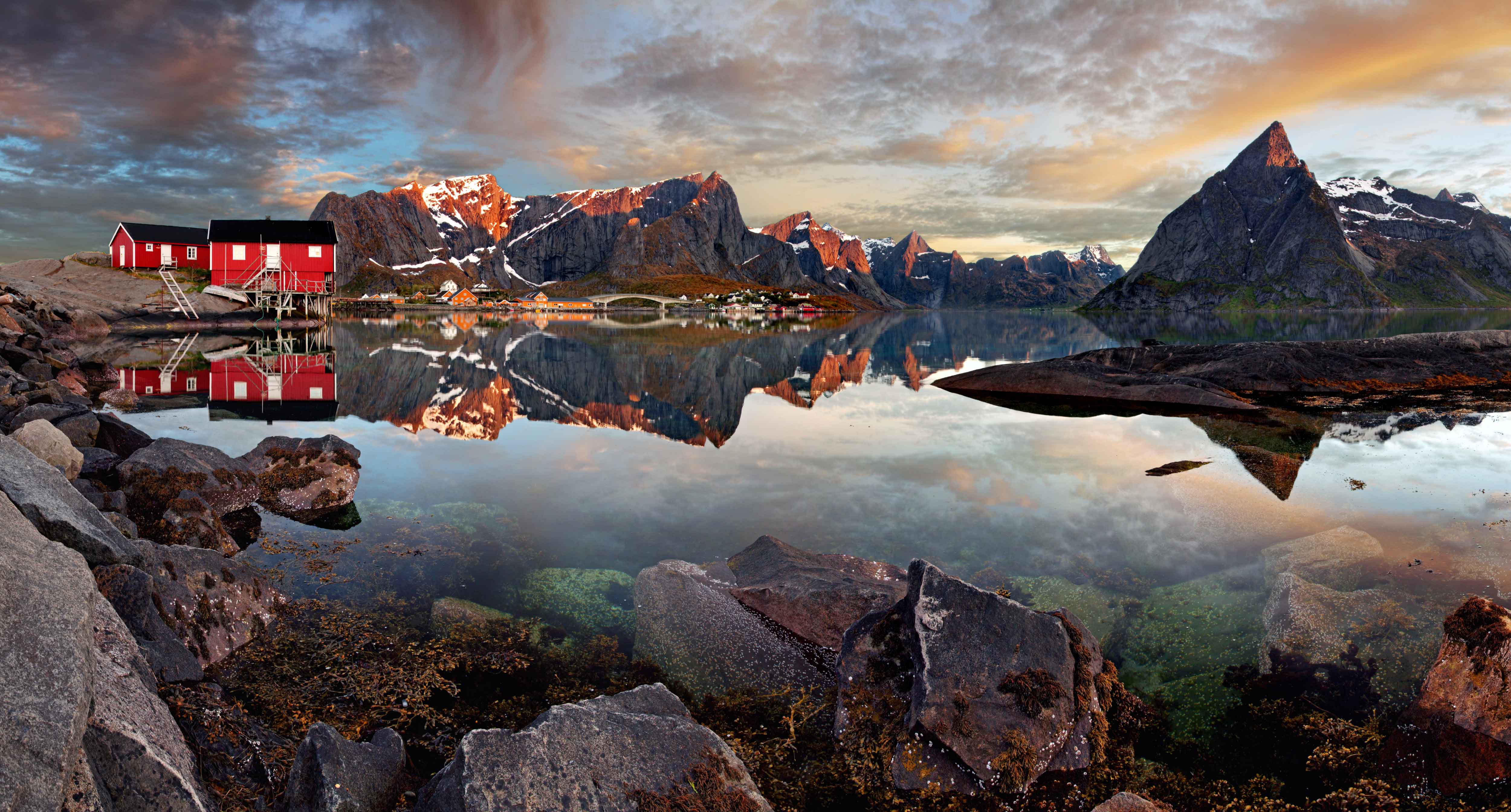 Lofoten archipelago in the county of Nordland, Norway.

An hour passes, and it’s still daylight. Two hours. The sun has moved so far around the sky that it’s hidden by land, but there’s still just enough light to read a book.

Four hours later, the sun’s back in another entirely different part of the sky, and it’s curving upwards again. Sunset has seamlessly become sunrise, night is cancelled - and your brain has absolutely no idea what to make of it all.

This is happening for two reasons. Firstly, you’re in the extreme north of Norway, spending long summer days and increasingly non-existent nights exploring its majestic fjords, and your cruise has now taken you north of the Arctic Circle.

The coastal vessel MS Richard With taken in Norway

Secondly, the Earth has developed a bit of a wobble. But don’t be alarmed - it’s been going on since the origins of life on our planet, and it’s the reason we have seasons.

Now the science. Due to a 23.5 degree tilt in our planet’s axis in relation to its orbit, that angle means at some points of the year and depending where we are, the maximum possible sunlight is hitting us and everything is warm and bright and growing like crazy - and at other points, the sunlight takes a slanting path through vast amounts of our atmosphere, losing heat as it goes, and we experience winter.

However, things start to get really weird the closer you get to the poles.

Imagine for a second how the Greek explorer Pytheas must have made of northern Norway in the 4th Century BC, as he took a journey around the fringe of what is now Northern Europe, which back then must have seemed like the utmost edge of the world. (Not literally, of course - the Ancient Greeks had calculated the Earth must be a globe some two centuries earlier.)

Imagine his surprise at finding a place in the world where, at certain times of the year, the sun refuses to set.

The reason is that invisible, human-made line that your cruise ship recently crossed. It’s defined thus: “The Arctic Circle is the northernmost point at which the centre of the Midnight Sun is *just* visible on the June solstice (the longest day of the year)”.

Or putting it another way: north of here, there are times when the sun never sets, and other times when it refuses to rise.

In Norway, the Circle starts three-quarters of the way between Trondheim and Bodø - and due to a 40,000 year old cycle of axial fluctuations, it’s currently creeping north at around 15 metres per year. North of this line, for a couple of months around the solstice (June 20th-22nd), the sun can be seen in the sky even at midnight.

The city of Trondheim in Norway

This time round, your cruise will just be missing it. The days will be astonishingly long as your ship rounds the North Cape and explores the northern coast - Norway to the south, Svalbard over the horizon to the north. You’ll experience a weird late-night twilight, without experiencing the Midnight Sun itself - and maybe that’s all the introduction you need right now.

The Norwegians above the Arctic Circle are used to it, of course. Your weird is their normal. This is the part of the year where they can stay up late and get everything done, where they can step outside in the dead of night to get a bit of house maintenance work done, or do a spot of gardening.

Six months from now, Norway’s northern peoples may be relying on giants mirrors and light-therapy clinics to stave off the psychological burden of perpetual darkness - but right now, they’re making hay while the sun shines, and since the sun is always shining, away they go.

Non-human Norwegians are also unusually active. A 1960 study of trees in the parts of Alaska above the Arctic Circle showed that compared to more equatorial examples of the same species, extreme-North trees grew much faster in the summer, to compensate for much slower-than-average growth in the months of darkness. Under the Midnight Sun the natural world speeds up, even becoming a little manic.

If you were staying in this perpetual daylight for very long, even for a few days, you’d feel it too. It’s a hard adjustment to make, and your natural sleep patterns could be ruinously disrupted. If you want to stay rested and alert for the latter half of your journey, you should rely on blackout curtains in your bedroom, and get used to wearing a sleep-mask. (You brought one, right? Good.)

But you should also embrace a little of this weirdness, this day that doesn’t quit. If you’ve ever wished you had longer to enjoy the incredible colours of a Northern European sunset, this is everything you could ever hope for.

By all means, experiment with power-naps and siestas, so you can go up on deck at the most absurd time and find it’s light enough to take photos and see this incredible landscape as it slips past.

Experience a little of the Norwegian rhythms of life under the Midnight Sun, and see how they suit you. Let your imagination roam to take in the fact that at the pole, far to the north of here (as far north as possible to go, in fact), it’s been daytime for the last three months - and will continue to be for the next three.

Try that extreme weirdness on for size, and wonder how Arctic explorers handle it. Maybe shudder a little in sympathy. And then retire below-decks to your room, pull the curtains tightly shut, and pretend you’re somewhere that has proper, sensible days and nights, so you can get some much-needed sleep.

Our Majestic Fjords of Norway cruise is exploring the Arctic Circle between 27th April and the 14th May 2022 - more details in your member newsletter!