A desert is the last thing anyone would equate with paradise, but Jordan’s vast desert region is just that. Comprising around three-quarters of the country, the Jordanian desert is where you’ll find spectacular sights that bring peace and happiness to all those who come to visit. Whether it’s trekking across dunes of red sand or camping beneath a blanket of stars or scrambling up rock bridges, there is plenty for you to do and enjoy in this desert kingdom.

A lesson in geography

Jordan shares a border with Syria, Iraq, Saudi Arabia, and Israel. Almost completely landlocked, this Middle Eastern country has a 26-kilometer shoreline along the Gulf of Aqaba, which provides its only access to the Red Sea.

The rest of Jordan is land — valleys, mountains, plateaus, and deserts that give rise to the country’s mild Mediterranean climate. However, summers can be brutally hot, especially in the arid deserts. Covered in sand, rocks, and the occasional salt flat, Jordan’s deserts serve as home to a few hardy species of plants and animals, as well as a smattering of Bedouin populations, all perfectly adapted to their harsh environs.

A walk among the ancients

Arguably the most famous landmark in all of Jordan is Petra. Since 9,000 BC, this UNESCO World Heritage Site has lain on the slopes of Jebel al-Madhbah, a rocky mountain in the middle of the desert. In the 4th century BC, it was established as the capital of the Nabatean Kingdom; the Nabateans were a group of nomadic Arabs known for their skill in trade, agriculture, and stone carving, as evidenced by the buildings they hewed into the rose-colored sandstone cliffs of Petra. 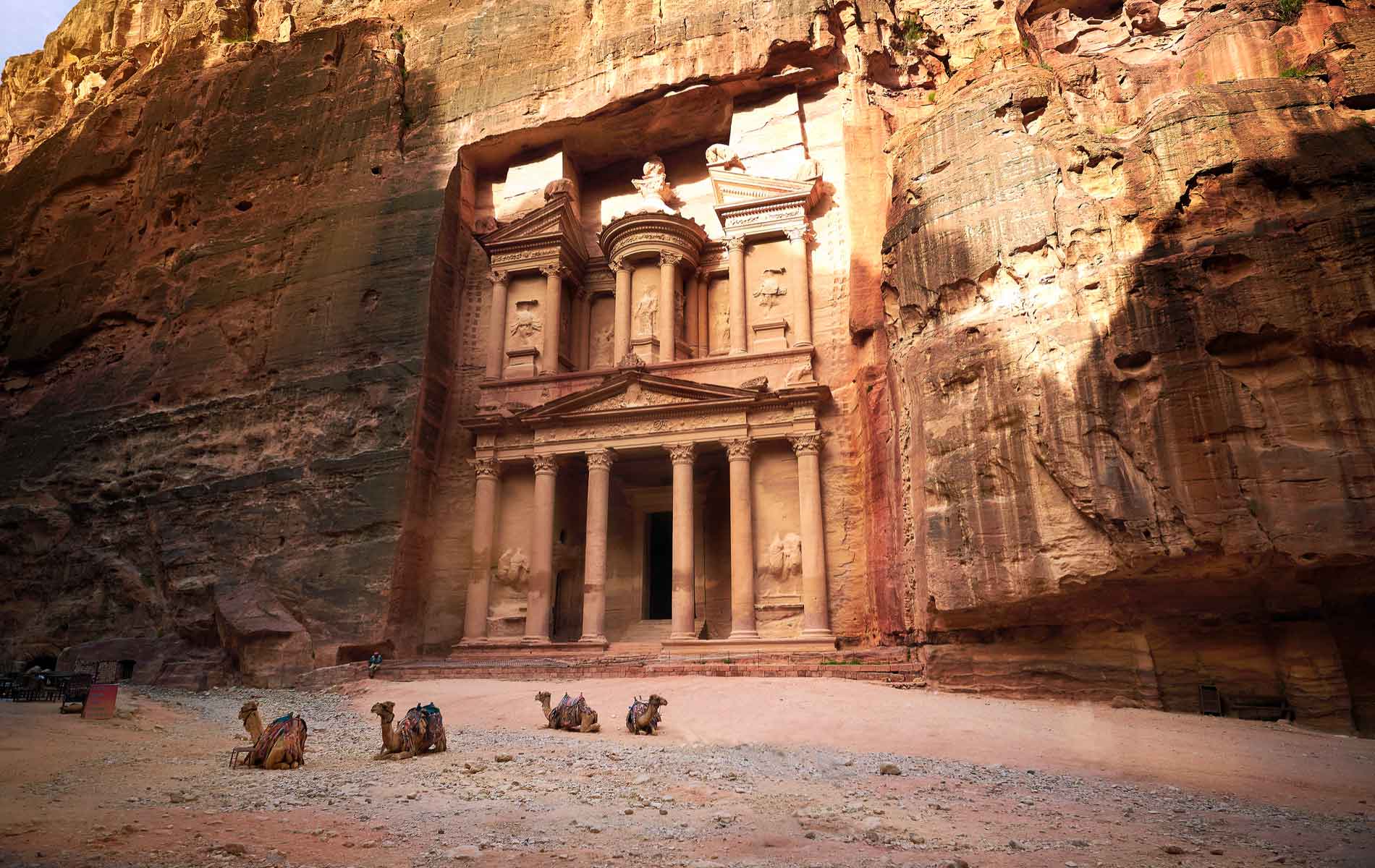 The Monastery Ad-Deir, at Petra, Jordan

Every day, thousands of visitors go through the Siq, the dim, narrow passageway that winds 1.2 kilometers along a deep canyon that leads into the heart of Petra. You can avoid the crowds if you visit early in the morning; then, you can meander at a leisurely pace down the Siq and straight up to Petra's most famous monument, Al Khazneh or the Treasury.

From Al Khazneh's colonnaded facade, it's quite a hike — or donkey, camel, or buggy ride — to the city's 800 or so other attractions. Highlights include El Deir (or The Monastery), which was built as a tomb in the 1st century BC and reused as a church during the Byzantine period. There are also the columns of the Great Temple and a theater cut into the hillside, affording you a sweeping view of the ruins of the Royal Tombs and the magnificent desertscape.

A valley of sand

If you’re looking for the ultimate desert experience, look no further than Wadi Rum. Blazing hot in the summer and freezing in the winter, Wadi Rum is inhospitable, but several Bedouin tribes call this protected area home. Some of them allow tourists to stay overnight in their goat-hair tents. Camp with the Bedouins and disconnect from the rest of the world; sit under the starry skies drinking strong cups of tea brewed with sugar and sage, or partake in a traditional zarb, a dish of meat and vegetables roasted for hours in an earth oven. 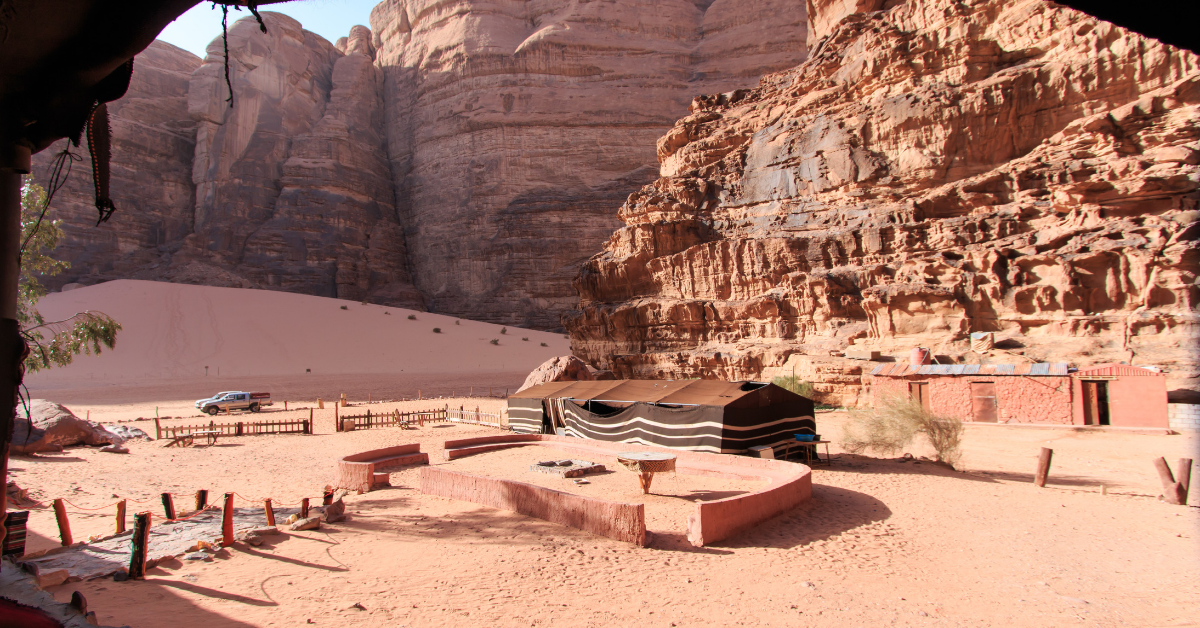 A Bedouin camp in the Wadi Rum desert

Besides camping, there’s a lot more to do in Wadi Rum. Hop on a 4x4 and visit several sites where you’ll find petroglyphs and inscriptions etched into boulders and cliff faces. These 12,000-year-old engravings of human and animal figures tell stories of how the area’s earliest inhabitants lived and interacted with nature. Or ride out to Wadi Rum’s many canyons, mountains, and rock formations, and get a thrill out of hiking, rock climbing, and abseiling. End your day at the red sand dunes at the foothills of Jebel Umm Ulaydiyya, the perfect spot for viewing the spectacular sunset.

Movie buffs will get a kick out of open-air screenings of cinematic gems filmed in Wadi Rum, from Lawrence of Arabia to Star Wars to The Martian. Inquire about tickets and screening times at the visitor center. While there, take pictures of the Seven Pillars of Wisdom, one of Wadi Rum’s most famous rock formations, and shop for ceramics and textiles made by women from the surrounding villages.

A cultural and artistic hub

While Amman is not in the desert, the capital is home to one of several “desert palaces” built by the Umayyads across northeastern Jordan in the 7th and 8th centuries AD.

Located on Citadel Hill (or Jabal Al Qala’a), the Umayyad Palace complex stands alongside various other structures of historical and cultural value, such as a Byzantine church, the Jordan Archaeological Museum, and the Roman Temple of Hercules. Visit the Citadel for astounding views of the city and the well-preserved Roman Theater of Amman at the bottom of the hill. 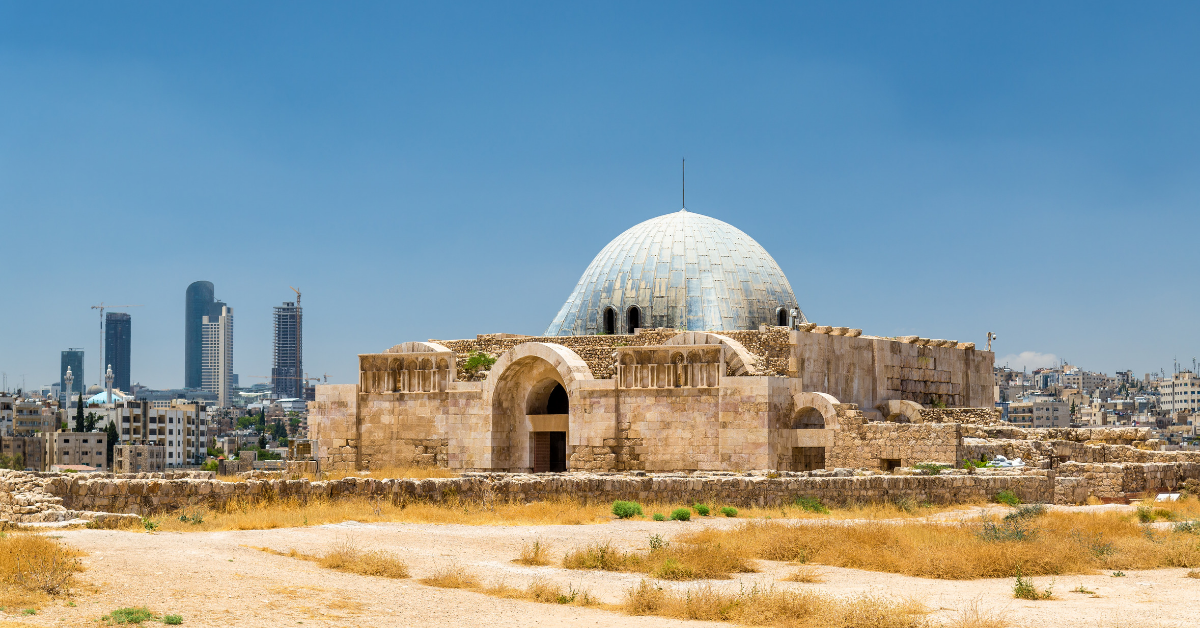 Umayyad Palace at the Amman Citadel

Amman is also a haven for artists. In recent years, artists seeking refuge from conflict and censorship in the more volatile countries of the Middle East have flocked to Amman and held exhibitions in the city’s numerous galleries. Art lovers shouldn’t miss the Jabal Amman and Jabal l’weibdeh districts, home to some of the city’s most notable galleries of traditional and contemporary art.

Whatever your idea of paradise might be, you’ll be sure to find it in Jordan. Join Wheel & Anchor on a tour of Jordan, Egypt, and Israel in 2020, and discover the delights that make Jordan a true earthly paradise. Ask us for more details.