Dreaming of Egypt? Slow-travel down the Nile

A slow journey down the storied Nile River guarantees an immersive experience filled with stunning architecture, vivid scenery, and dreamy stargazing. If you don’t fancy a river cruise, don’t fret. Huge chunks of cruises along the Luxor-Aswan stretch of the Nile will be spent on land; there are simply way too many incredible sights to see to stay put in a boat. But by journeying slowly, you get the full experience of this fabled waterway the way pharaohs did a long, long time ago.

Regardless of how you wish to explore Egypt, it is best experienced at a serene pace.

Sailing gently along the Nile is one of the most satisfying ways to learn about ancient Egypt, one of the world’s oldest civilizations. Discover why ancient Egyptians considered the river as a source of life and the role it played in shaping the country’s history.

Those who’ve experienced a luxurious river cruise will know what’s in store: a serene waterway, captivating scenery, elegant suites, hospitable and attentive crew, and your every need catered to. A Nile cruise offers much of the same, but its historic river, dotted with magnificent temples, tombs, and sphinxes, set it apart.

See the riverbanks where the first civilizations were formed, or rest your eyes on vast tracts of verdant lands as you lounge on your ship’s deck. Cruise in comfort and enjoy the wonderful amenities, savor the delicious food, set your sights on starry night starts, or just lay back and let the wind caress your aching soul as the Nile unfolds.

Some cruises begin in Luxor, the capital of Egypt’s New Kingdom pharaohs where the famed Egyptian rulers were laid to rest. It’s where many visitors embark on their cruise, which typically concludes in Aswan. However, it’s also possible to embark on a boat in Aswan toward Luxor. 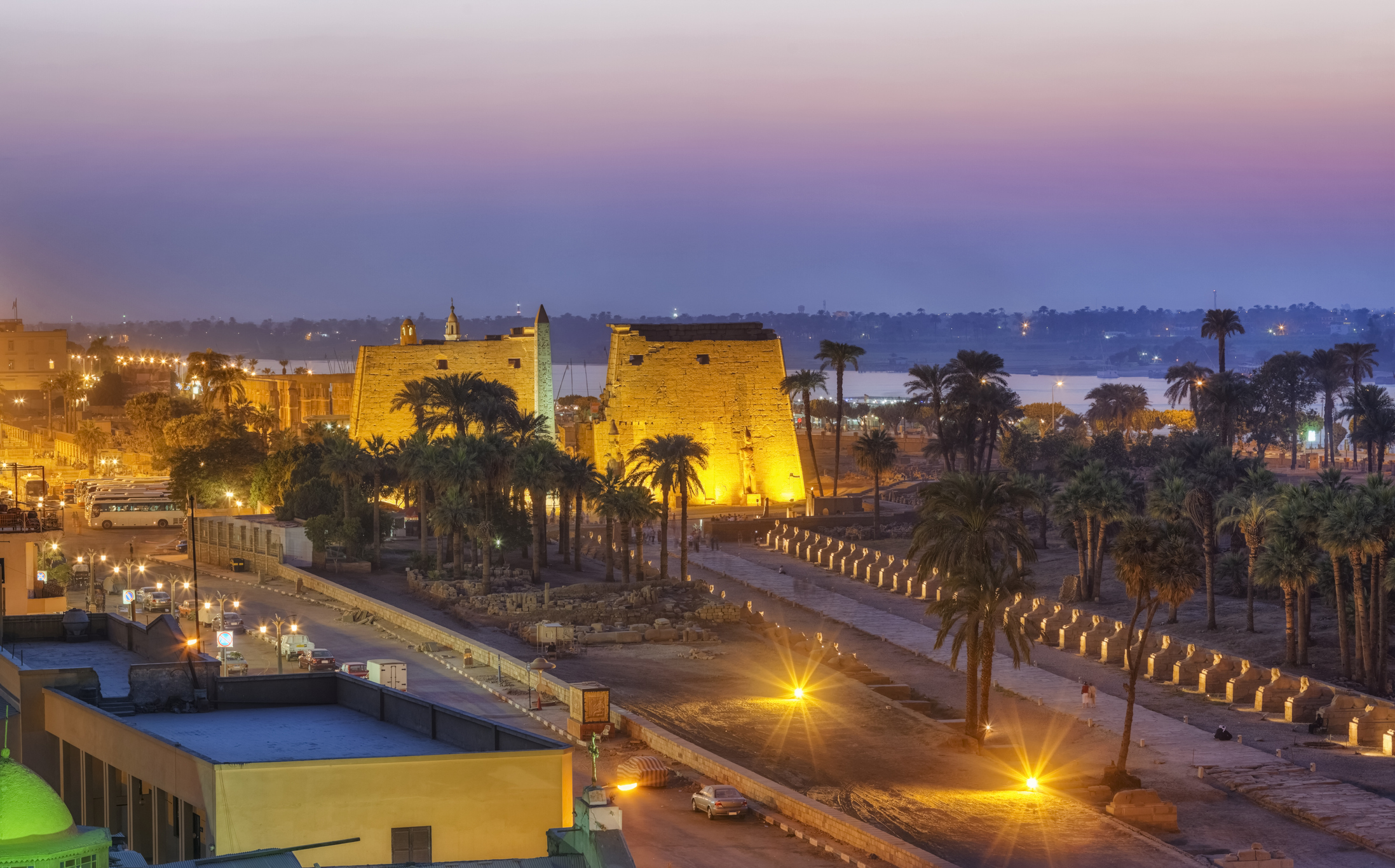 Known in ancient times as Thebes, Luxor is filled with fascinating temples, mosques, towering colossi, sphinxes, and other architectural wonders and ruins that immortalize the myths of Egyptian gods and goddesses and the peoples they ruled. There are hotels, markets, museums, and an airport, too.

The Luxor Temple is a sprawling complex that presents some of the most compelling places for discovery. Its entrance is flanked by two sphinxes, perhaps to symbolically guard the temple, which took 500 years to build. It is where Rameses II and Tutankhamun’s towering statues, and intriguing wall decorations, can be found.

Directly connected to the Luxor Temple is the 4,000-year-old Karnak Temple, where early Egyptian rulers as well as the invaders in the region tried to leave their mark — seen throughout this vast complex are inscriptions, graffiti, decayed temples, churches, and other artifacts. It is also where the enthralling Karnak Open Air Museum is located. Walking around its immense grounds is as fascinating as gazing at the Pyramids of Giza. This complex draws huge crowds to marvel at the arresting sandstone figures of Egyptian gods like Amun-Ra (one of the ancient Egyptians most venerated gods) and his wife the goddess Mut. Historical curiosities in these temples abound, making them a must-visit.

Related article: Your not-so-usual things to do in Egypt

The Valley of the Kings may not inspire as much awe as the colossal pyramids in Cairo, but it’s truly just as mesmerizing. In fact, unlike many of the pyramids, there’s plenty to see inside its pristine chambers. Within the walls of this UNESCO World Heritage Site are vivid hieroglyphic paintings and carvings that tell the stories of Ancient Egypt. The New Kingdom pharaohs reserved it for its noblest, highly revered rulers, and it is where the iconic Tutankhamun’s tomb can be found. Meanwhile, the tomb of Rameses II’s “favorite wife” Nefertari can be found at the Valley of the Queens.

Carved in limestone rock and no less dazzling is the mortuary of Hatshepsut, one of the few women pharaohs who led Egypt to prosperity. While not exactly understated, her mortuary temple is less extravagant in style. It is, however, curiously stripped of her images, and Egyptologists believe powerful male successors — including her own son — made it so.

There will be other stops as the cruise draws to a close in Aswan. See the Temple of Kom Ombo, the second largest Egyptian temple comprised of the Temple of Horus (Osiris and Isis’ son) and Sobek (the crocodile god). Built during the Ptolemaic Dynasty, the temple is one of the best preserved ancient monuments in Egypt. It is unique in that it enshrines two sets of gods in separate but perfectly symmetrical structures. Visit this fascinating temple to gaze at preserved crocodile mummies, ancient graffiti, ornately carved columns, and other artifacts and curiosities.

And as the cruise finally winds down in Aswan, spend the last night on a joyous note: dance, sip cocktails, or attend a dress-up party.

There’s more than one way to experience Egypt, but spending slow days in the Nile is one of the most edifying and satisfying ways to do it. We're going to cruise down the Nile on a private sailboat in March of 2022...more information here!