Taking A Life-Affirming Dip In The Dead Sea

It doesn’t feel like any water you’ve ever stepped into.

It looks the same, certainly: the same wind-tugged waves dancing to the horizon, the same blue as the endless Middle Eastern sky you’re under right now. It’s perhaps a little warmer than you’re used to, but at first glance, it’s just another big, beautiful lake in a fascinating corner of the world…

And then you sink into it. 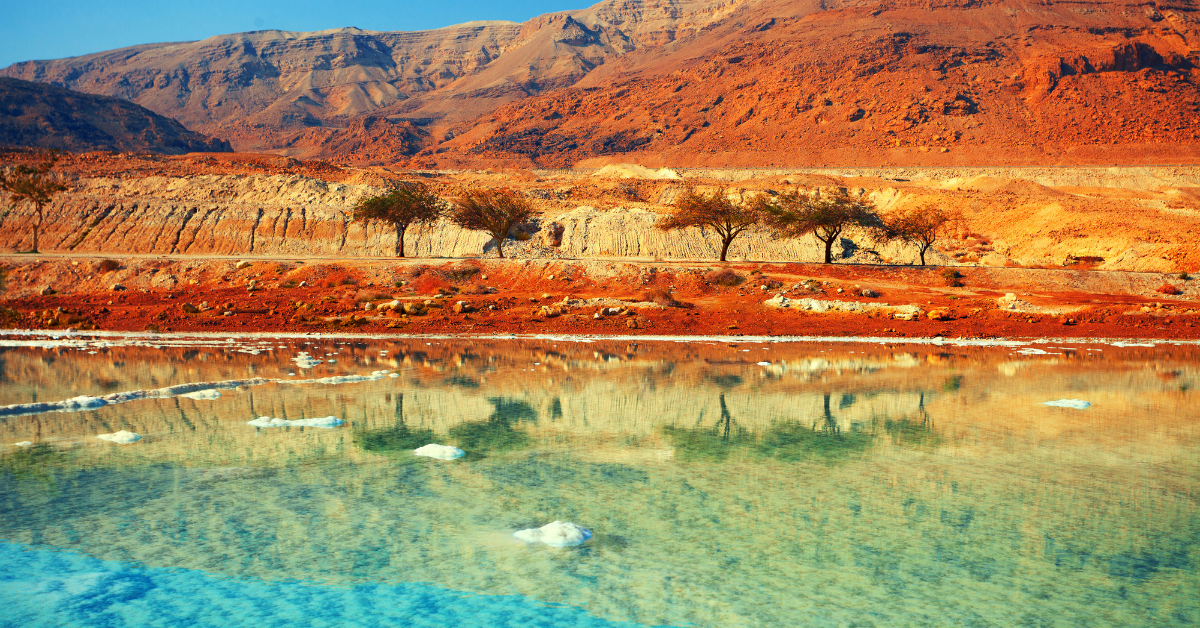 You’re on the final leg of our Egypt & The Holy Land tour, and you’re staying on the shore of the Dead Sea. To the east is Jordan, Israel and the West Bank are westwards - but today, it’s time to relax, and it’s really hot out there. What makes more sense than a refreshing dip in the water that runs from here to the horizon?

Except it feels...odd against your skin. Your body knows something unusual is going on here. It feels curiously oily, thicker, slightly heavier between your fingers as you wave your hand through it. It’s weirdly warm. What gives?

That’s if you don’t have any wounds on your body right now. You know how a papercut can be so tiny it’s invisible to the naked eye, and yet WOW it can hurt like the devil? If you have any cuts or scrapes on your body, or if you unwise enough to have a close shave this morning, that’s what you’re feeling now.

The Dead Sea’s name is deceptive if you’re a human being. It’s not dangerous, and it’s not going to kill you - at least, your chances are pretty much the same as with any large body of water. Treat it with the appropriate respect, and you’re ready to enjoy its many unique delights - more on those in just a minute.

But if you’re any other form of life, you’re already long dead.

Dip a glass into the average ocean and haul it out again, and what you’re holding is a solution, made of a mixture of pure water and a number of dissolved salts and metals. If it was just water, you could drink it like freshwater - but the amount of salt (around 3.5% by volume) makes it hostile to our innards.

There’s so much in the sea that if all of the salt in the ocean were removed and spread over the world’s dry land, it’d form a layer 150 metres thick.

Now imagine the same scenario where all the world’s oceans had the salt content of the Dead Sea. That layer of salt would be over a kilometer thick. Dead Sea water is around 34% salt (342 g/kg) - and there is very, very little life on our planet that can live in water like that.

There so much salt that it “snows” underwater. Every year a dusting of salt falls to the sea floor, creating a layer up to 10cm thick. It’s formed because the Dead Sea can be seen as two layers: warm, super-salty water at the top, and cooler, less salty at the bottom. When waves mix warmer water into cold, the salt separates out (warm water can hold more of it) - and it patters down to coat the sea bed.

The reason it’s so salty is that, in essence, the Dead Sea is a thin puddle of seawater that’s been evaporating away for the last 15,000 years.

It’s the last of a series of lakes that occupied a huge rift valley - and every year, the landlocked Dead Sea is getting a little smaller, even with freshwater flowing into it from the Jordan River.

You can see how big it must have originally been, because this is the lowest point on dry land for the whole of our planet - 430 metres below sea level. Stand with your feet in the Dead Sea, and the normal sea level is nearly half a kilometre above your head.

The Dead Sea still has a way to go before it’s all evaporated away. It’s currently around 300 metres down at its deepest point, and dropping by a little over a metre a year. But the water that’s left is absurdly, staggeringly salty - and that’s what you’re feeling right now, as you sink your limbs into it.

It’s best to immerse yourself in the Dead Sea slowly. No sudden movements, no splashing, no immersing your head, and certainly no jumping in. If you get this water in your eyes, you’ll know about it - so it’s best you take the slow lane with this activity.

Once you’re fully in, you can stick your feet out in front of you. No, really, it’s okay. You know the phrase “sink or swim”? It doesn’t apply to the Dead Sea, because you can’t do either. The only thing you can do is float.

This is what it’s like to be a rubber duck. 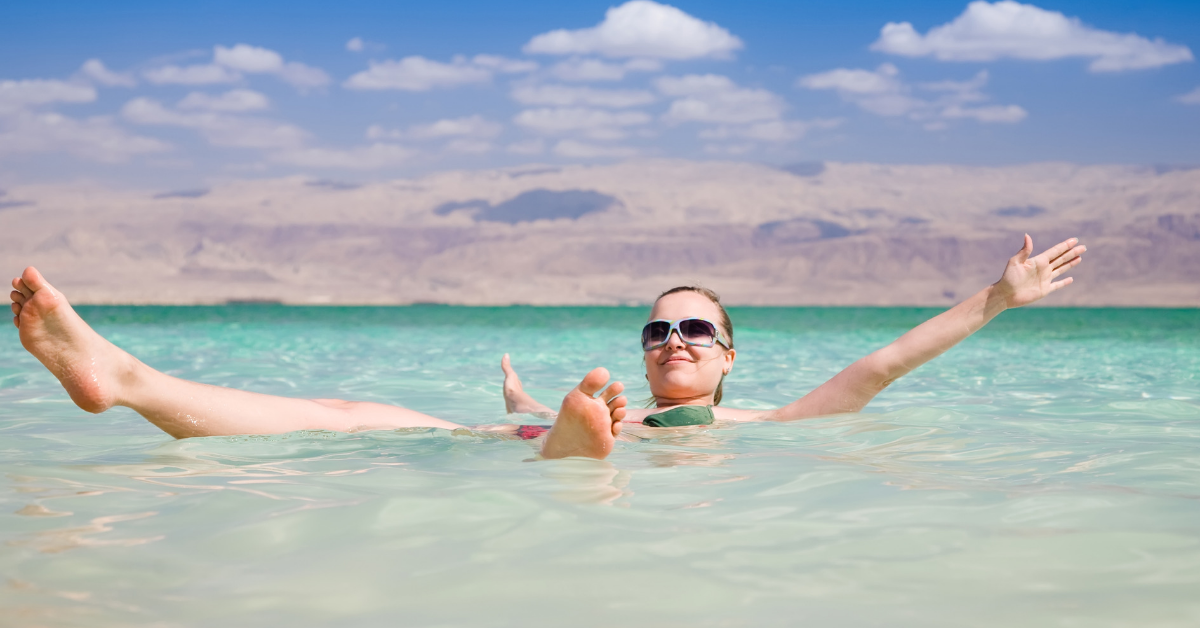 Woman floating on the salty waters of the Dead Sea

You can lay there flat on your back. You can even read a newspaper, your toes wiggling happily in the open air. It’s less like bobbing around in a lake and more like laying on an unusually squishy bed.

You may find the Dead Sea salts will do wonders for your skin. For thousands of years, people have been using the waters and muds of this sea to cure all sorts of ailments, from psoriasis to osteoarthritis. You may find it improves your breathing, the same way breathing salty or ionized air often helps with respiratory ailments. 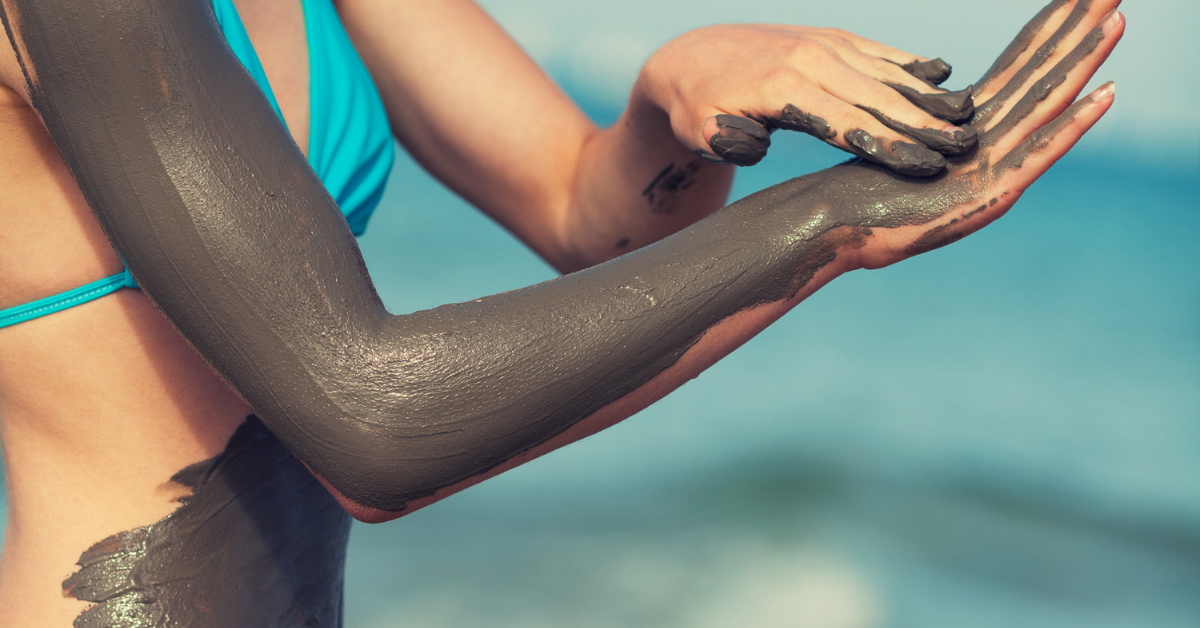 A woman enjoying the benefits of Dead Sea mud mask

You may become one of those who have benefited from this sea’s unique conditions - or, you may find your skin a bit drier afterwards, and need a good shower to feel normal again.

(You definitely should drink some water, if you’re going to be in the Dead Sea for more than a quarter-hour - all that salt means it’s very easy to become dehydrated out there.)

When you step out again, the Dead Sea might have ruined lakes for you forever. Why don’t they all support you so comfortably like this, so it’s impossible to sink?

Alas, they don’t. This is an experience you’re unlikely to ever have again - and you may even be one of the last to do it. Another century or so, and will this colossal body of water will go from endangered to dead and buried?

So long for now, Dead Sea. You’re a surprisingly lively one.