A guide to eating in Egypt

Eating in Egypt is considered by many to be an adventure in itself, a culinary walking tour of a culture rich in history. Egypt is bounded by the Mediterranean Sea to the north and the Red Sea to the east while being neighbors to Libya and Sudan — which explains why Egyptian cuisine is a marriage of the bounties of the sea and honest, humble fare from the land.

What to expect with Egyptian cuisine

Many Egyptian dishes are comprised of legumes and vegetables, products of the region’s sliver of agricultural bounty situated in the Nile Valley and Delta. These dishes are very reminiscent of Eastern Mediterranean cuisine — pulses, stews, lamb, grilled items, and a lot of finger foods.

Local stews and entrees are mostly prepared with vegetables, and even high-end restaurants serve plated versions of the street foods that most Egyptians know and love. Some popular food items are molokhiyya (a garlicky vegetable stew made from the jute plant), hamam (braised squab), and mahshi (rice-stuffed vegetables). 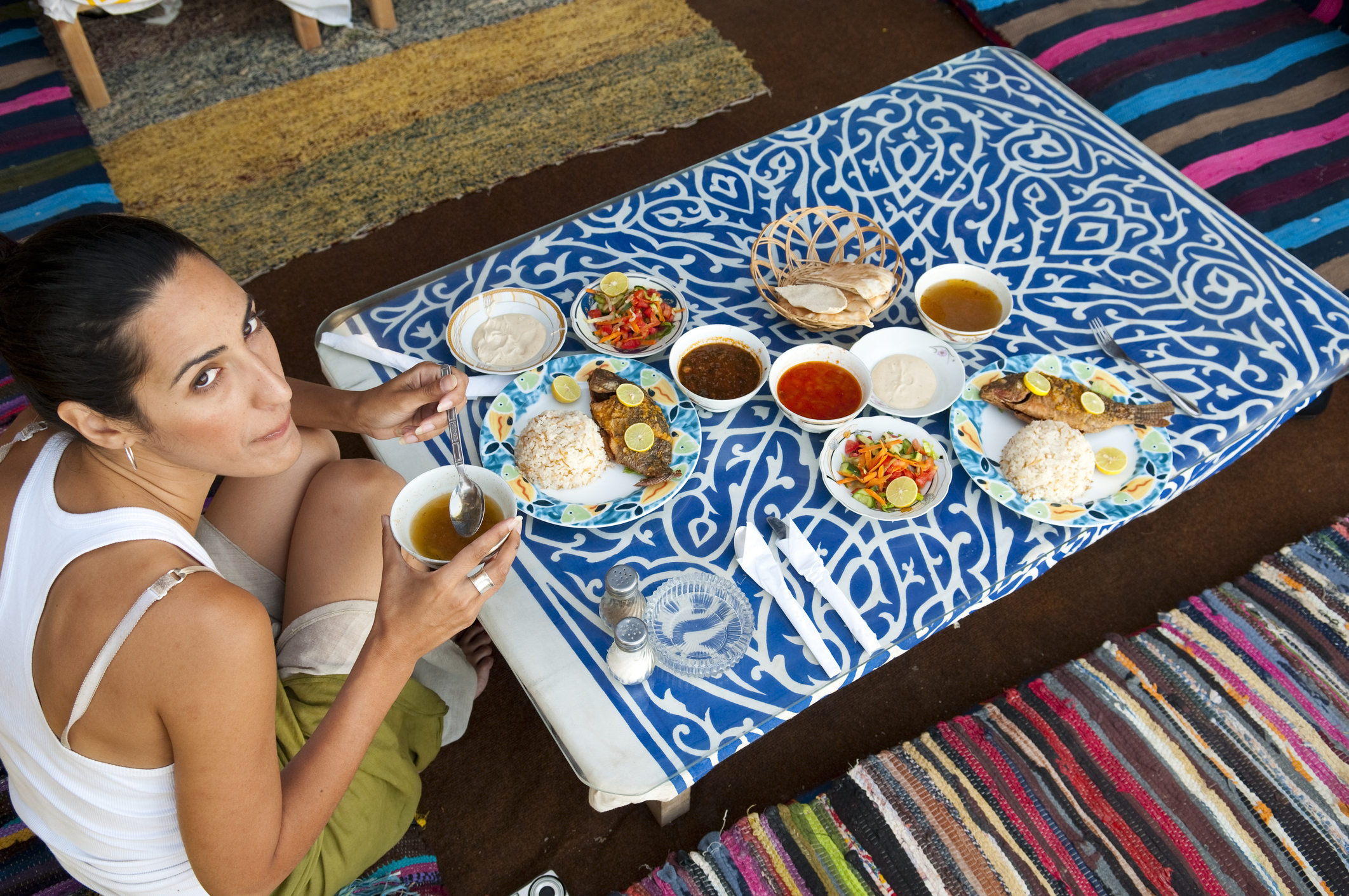 Expect to see bread everywhere; it is a staple of the Egyptian diet, and comes in many different forms. Aish baladi, which is similar to pita, is a flatbread made with whole wheat flour. Shammy (flatbread made with white flour) is even more popular and is the favorite vessel for handling taamiyya, more popularly known as falafel. Should you have a hankering for something more similar, the Western-style dinner roll kaiser is often served in restaurants and hotels.

Take advantage of the region’s proximity to large bodies of water and large swaths of farmland. In Alexandria, you’ll find kalamaari (squid), bouri mashwi (fermented and dried grey mullet), and other tasty fish varieties like sea bass, bream, and sole. The Red Sea is famous for spiny lobsters, and many restaurants source tilapia from nearby Lake Nasser. Red meat eaters will enjoy balti (lamb or goat meat curry), daoud basha (Egyptian meatballs), kababs, and many other meat combinations locals love to toss in tagens (clay pots) to be stewed.

Egyptians also have a surprisingly mighty sweet tooth, and puddings are a favorite. Muhallabieh (milk pudding with pine nuts and almonds) and roz bi laban (rice pudding), which are quite popular, have a unique Arabic flavor brought about by rose or orange water infusions that give these desserts complexity and depth. Another crowd hit is Egypt’s version of baklava called omm ali, baked flaky pastry layers with nuts, raisins, and cream. Lastly, kunafa is a unique vermicelli-like pastry that is soaked in syrup and rolled in nuts. It’s a crispy sweet treat that can sustain you for a day of touring.

Where and when to eat

Cairo, Alexandria, Luxor, and the resort towns along the Red Sea should be chock-full of eating options for tourists, but many seasoned travellers freely state that eating home-cooked meals is still an experience to beat. For those who may not be lucky enough to get invited to a local family's home, it is worth remembering that food choices get more limited the farther away from the city center you get.

When dining at restaurants, it’s essential to book ahead; if you’re in a hurry (or just want to eat as the locals do), feel free to walk into the many canteen-style budget restaurants and eateries that dot the city. Practically all restaurants in Egypt don’t serve alcohol, although it isn’t uncommon for brand name hotels to have dining establishments that serve beer and certain types of liquor.

Last but definitely not the least, take the time to explore Cairo for its ahwas (tea houses). Some ahwas in Cairo have been open since the 1700s, and tourists and locals alike visit these shops for their tea and shisha. It’s a great way to experience the city the way travellers have done for ages.

The country is tourist-friendly, but remember that its rich history and culture means it’s a country of customs and beliefs. Here are some things visitors should remember while in Egypt, so as to stay on the good side of hosts and locals:

Egypt is a culinary experience like no other, and Egyptian cuisine is as rich and complex as its people and its cultures. Join Wheel & Anchor’s upcoming Ultimate Nile Cruise to see the all highlights during a spectacular cruise down the Nile...more details here!

Dreaming of Egypt? Slow-travel down the Nile

Your not-so-usual things to do in Egypt