Charms and mysteries of Prague Castle

Hundreds of centuries-old castles dot the European continent, lending an air of enchantment to this storied land. But few live up to our fairytale fantasies and pique our curiosity more than Prague Castle. With its many soaring towers, expansive courtyards, and, of course, majestic castles and palaces, Prague Castle seems to have been plucked straight out of a fairytale — one replete with intrigue, mystery, and murder.

Prague Castle is more a village than just one building, and it’s a massive one at that. Straddling more than 17 acres (70,000 square metres), it is the world’s largest ancient castle complex and one of the best-preserved too, comprising numerous buildings that date back to various periods of history.

One of the most famous buildings within the castle premises is the Old Royal Palace. It is one of the oldest parts of Prague Castle, with the original wooden structure built in the late 9th century. In 1135, it was converted into a Romanesque castle that housed the Dukes of Bohemia until the 14th century, when King Charles IV had a Gothic palace erected in its place. Subsequent rulers expanded the palace, adding many private and public chambers, including Vladislav Hall, a room so massive that it could accommodate tourneying knights on horseback. Over the centuries, this late-Gothic hall has been used for banquets, receptions, and state ceremonies, such as the coronation of kings and the inauguration of presidents. 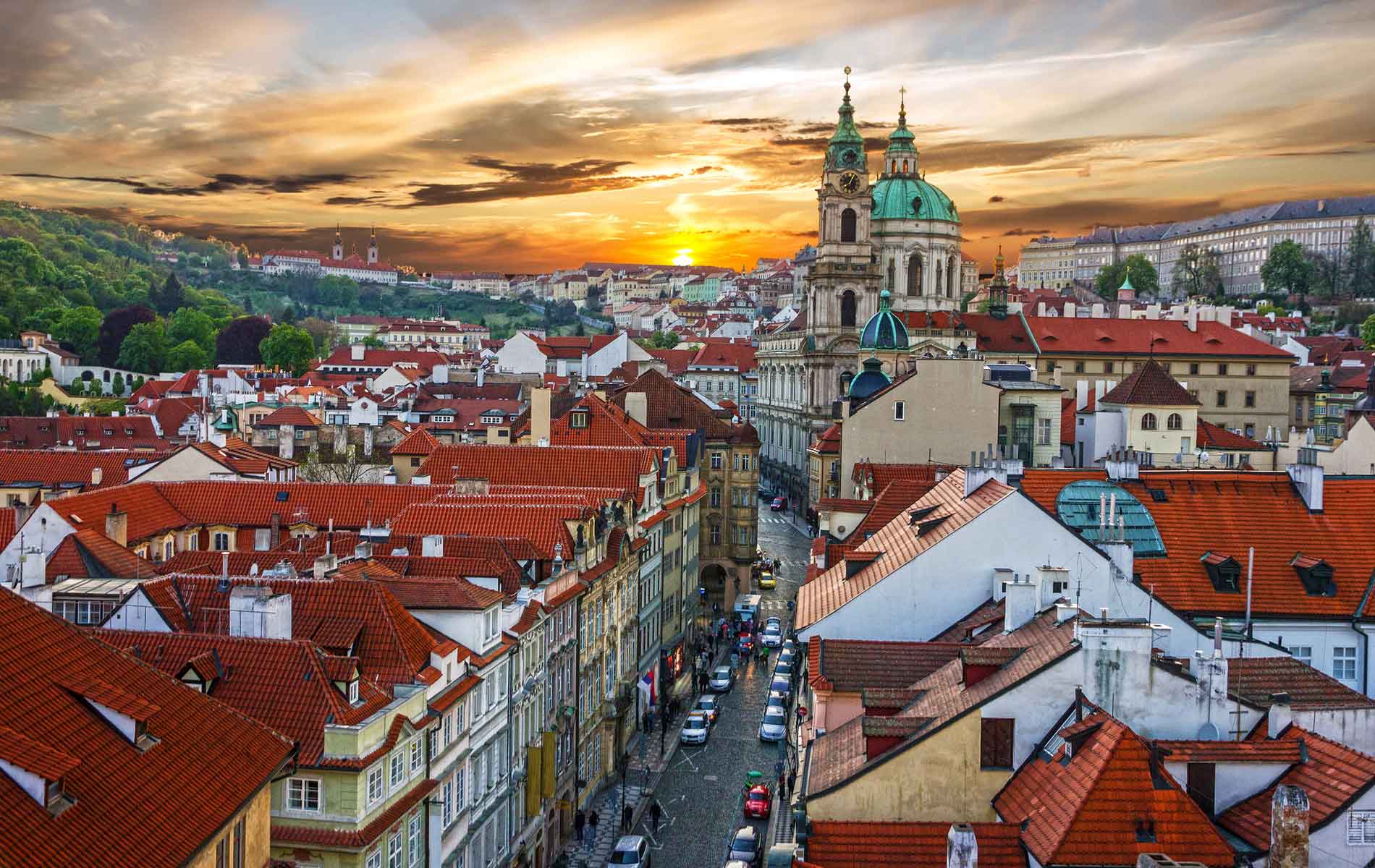 A view of Prague's old town and Prague Castle

Incidentally, the President of the Czech Republic’s offices are located at the New Royal Palace, just a stone’s throw away to the west. Although it’s not open to the public except on two national holidays, you can still admire the palace’s Baroque facade from the paved courtyard in front, under which lie the remains of the original medieval structures, including a few wooden houses, a church, and a graveyard.

There are also several churches and cathedrals within the Prague Castle complex, the most famous and important of which is the Basilica of St. Vitus. This Gothic cathedral’s spires are visible from practically everywhere in Prague, and its Great South Tower affords excellent views of the many other attractions on the castle grounds, including the famous Golden Lane.

For a time, Golden Lane was known as Alchemists’ Alley, though no alchemist ever lived or worked there. It actually takes its name from the royal goldsmiths that lived on the street back in the 17th century. In some of the houses, furniture and items from different eras are on display; visit to see authentic goldsmiths’ furnaces and anvils, apothecaries’ mortars and pestles, and — if you’re into that sort of thing — medieval torture devices.

The cathedral itself contains several historic structures, including the Royal Mausoleum, the final resting place of various Czech monarchs and patron saints. There’s also the Chapel of St. Wenceslas, which houses relics of St. Vitus and artworks depicting his life. It also leads to the room where the Bohemian Crown Jewels are kept. If you’re hoping to catch a glimpse of these, however, you’ll be much disappointed, as the Crown Jewels are kept under lock and key (seven of them, actually) year-round. In fact, you can only view the chapel and the Crown Chamber from outside, as visitors are prohibited from setting foot in the chapel. 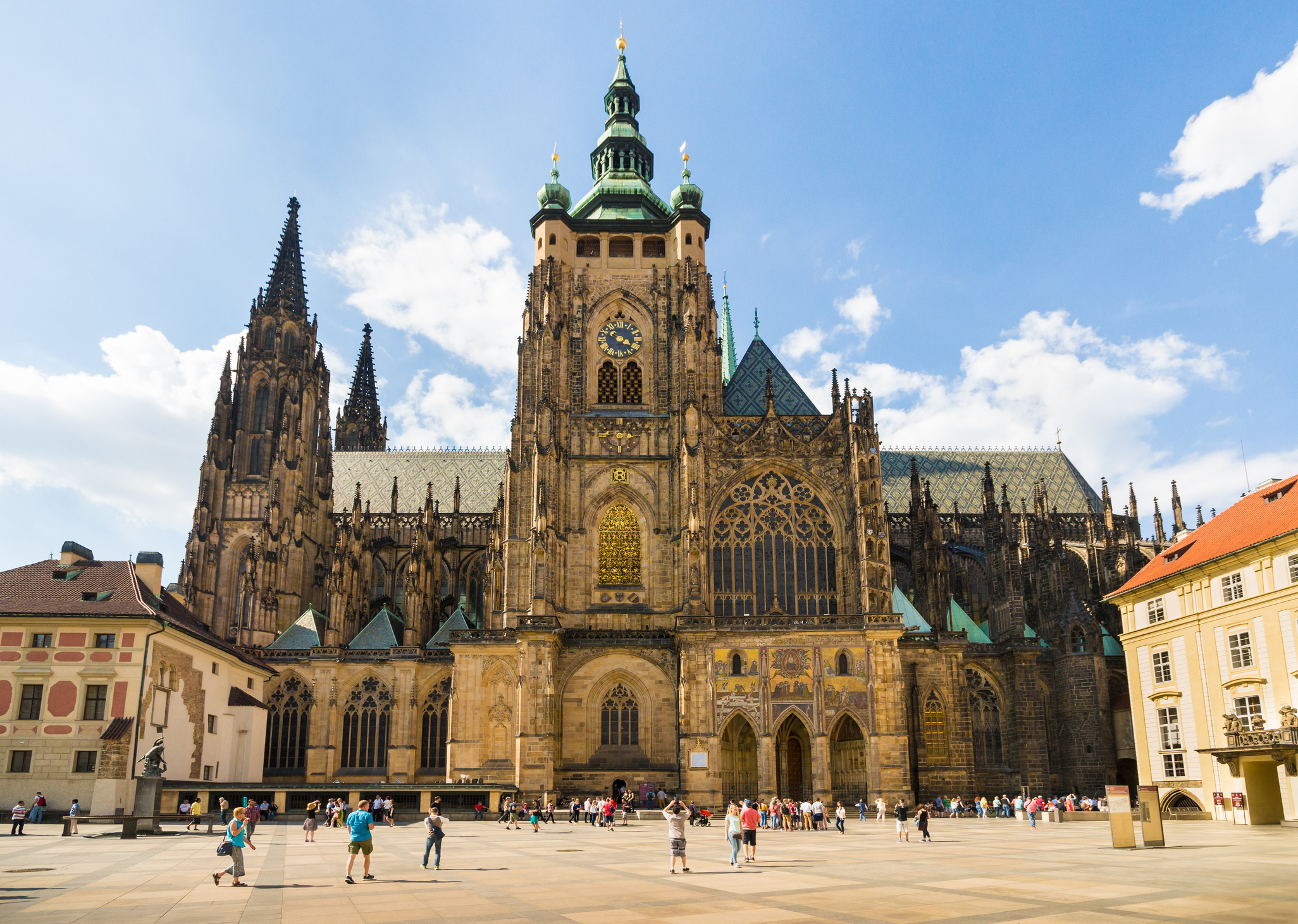 If you’re lucky enough to see the Crown Jewels on the rare occasion they are on display, keep your hands to yourself, please, and whatever you do, don’t put on the crown! Legend has it that only anointed Kings of Bohemia can put on the crown; any usurper or pretender who dares to do so will be forever cursed. This is what reportedly happened to top-ranking Nazi official Reinhard Heydrich, also known as The Butcher of Prague. Heydrich is said to have tried on the crown when the Nazis made Prague Castle their headquarters in 1941. Less than a year later, he died from injuries sustained in an ambush by Czech and Slovak soldiers.

A lot of broken windows

Prague Castle’s sinister reputation is attributed in part to the string of violent events that happened there over the years. As mentioned, the castle was a Nazi headquarters in World War II, and one can only imagine the horrors that the Nazis hatched and carried out within its walls. Centuries before that, Saxon and Swedish forces stormed and captured the castle during the Thirty Years’ War; the Swedes even looted Emperor Rudolf II’s extensive art collection and presented the stolen treasures to their queen. But way before all this was the Defenestration of Prague, a prelude to the Thirty Years’ War.

In 1618, two regents of the Roman Catholic Church were found guilty of violating the right to religious freedom. Expecting to be arrested, they were surprised to find themselves — and their secretary along with them — being hurled out of one of the Old Royal Palace’s countless windows instead. All three survived the 21-metre (70-foot) fall and proclaimed their experience a miracle. Eyewitnesses were quick to point out, though, that there was nothing miraculous about landing in a heap of manure.

That particular incident was not the only instance of defenestration to take place in the city; in fact, it’s officially known as the Second Defenestration of Prague. The First Defenestration occurred in 1419, and it led to the death of several town officials who were unceremoniously thrown out a window of the New Town Hall — right onto the spears of the angry mob below.

Not everything about Prague Castle is dark and twisty like its history. It also has some bright spots in the form of its magnificent gardens. Not to be missed is the Royal Garden, which was commissioned by Emperor Ferdinand I in 1534. Though changes have been made to it over the centuries, it still features elements of its original Italian Renaissance layout, adorned with porticos, fountains, and statues, and with plants and trees laid out in neat rows. A spectacular profusion of colors bursts from a wide variety of flowers; in particular, thousands of tulips — said to have been brought over from Turkey to Prague, then to the rest of Europe — bring life to the garden every spring. 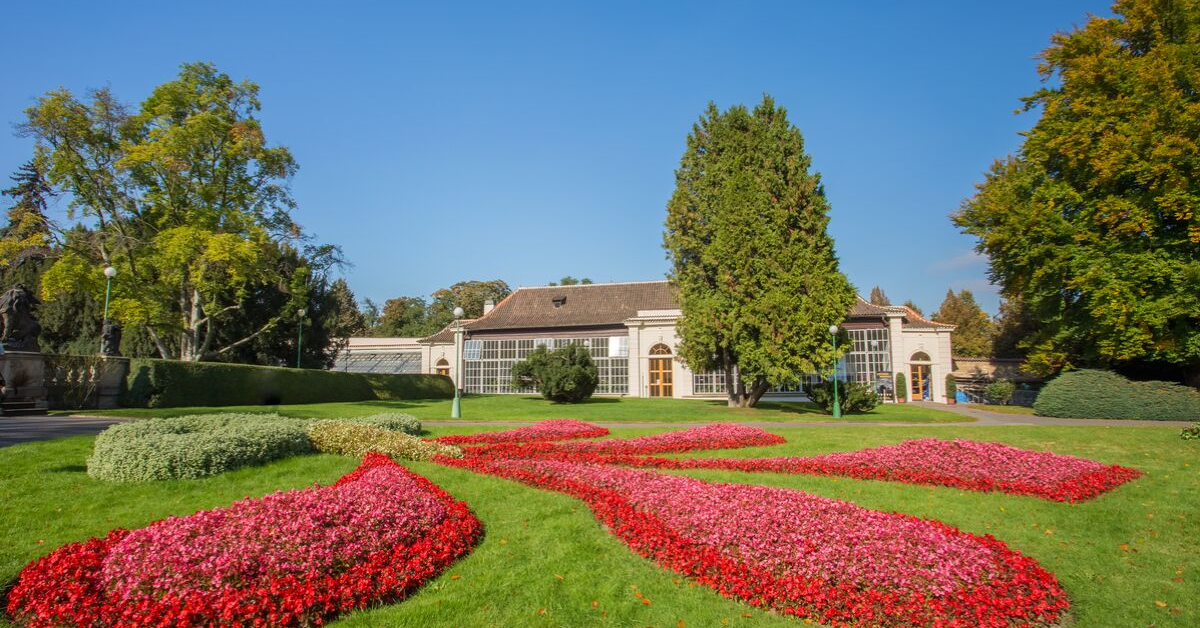 The Royal Garden is also the site of the Summer Palace, built by Ferdinand for his wife Anna Jagiello. Later, their grandson Rudolf II added a pheasantry as well as a greenhouse filled to the rafters with tropical and Mediterranean plants, including dozens of orange and other citrus trees. Today, only the greenhouse’s eastern wall remains, and in 1999, it was incorporated into the ultra-modern Orangery. Divided into three climate-controlled compartments, this steel and glass structure stands in stark contrast to the Royal Garden’s Renaissance-era buildings and Baroque-style flower beds, but without creating disharmony.

For a breathtaking view of Prague’s Lesser Town, Old Town, and nearby Petřín Hill, visit the terraced South Gardens, located on a narrow strip of land below the Old Royal Palace. Paradise Garden features a 17th-century pavilion with a turret and walls decorated with frescoes by Czech painter Josef Navrátil. The Garden on the Ramparts was originally laid out as a natural park in the 19th century, but its current geometric design is the result of extensive renovations in the 1920s. Finally, Hartig Garden, which was incorporated into the castle complex in the 1960s, used to be a part of nearby Hartig Palace. Its main attraction is a music pavilion, as well as Baroque stucco statues.

Prague Castle is just one of the many legends in the Czech capital. Uncover all of the city’s mysteries and fall for its charms with Wheel & Anchor’s band of explorers. Join us today.