Alluring islands that put the Azores on the map

It may be nothing more than a blip in the middle of the Atlantic, but the Azores is one of the most alluring places in the world. This string of islands is blessed with mild weather, lush green forests, mineral-rich soils, and sparkling blue seas that beckon travellers from all over the globe. From nature to culture to food, here are the things that will make you fall in love with these islands. 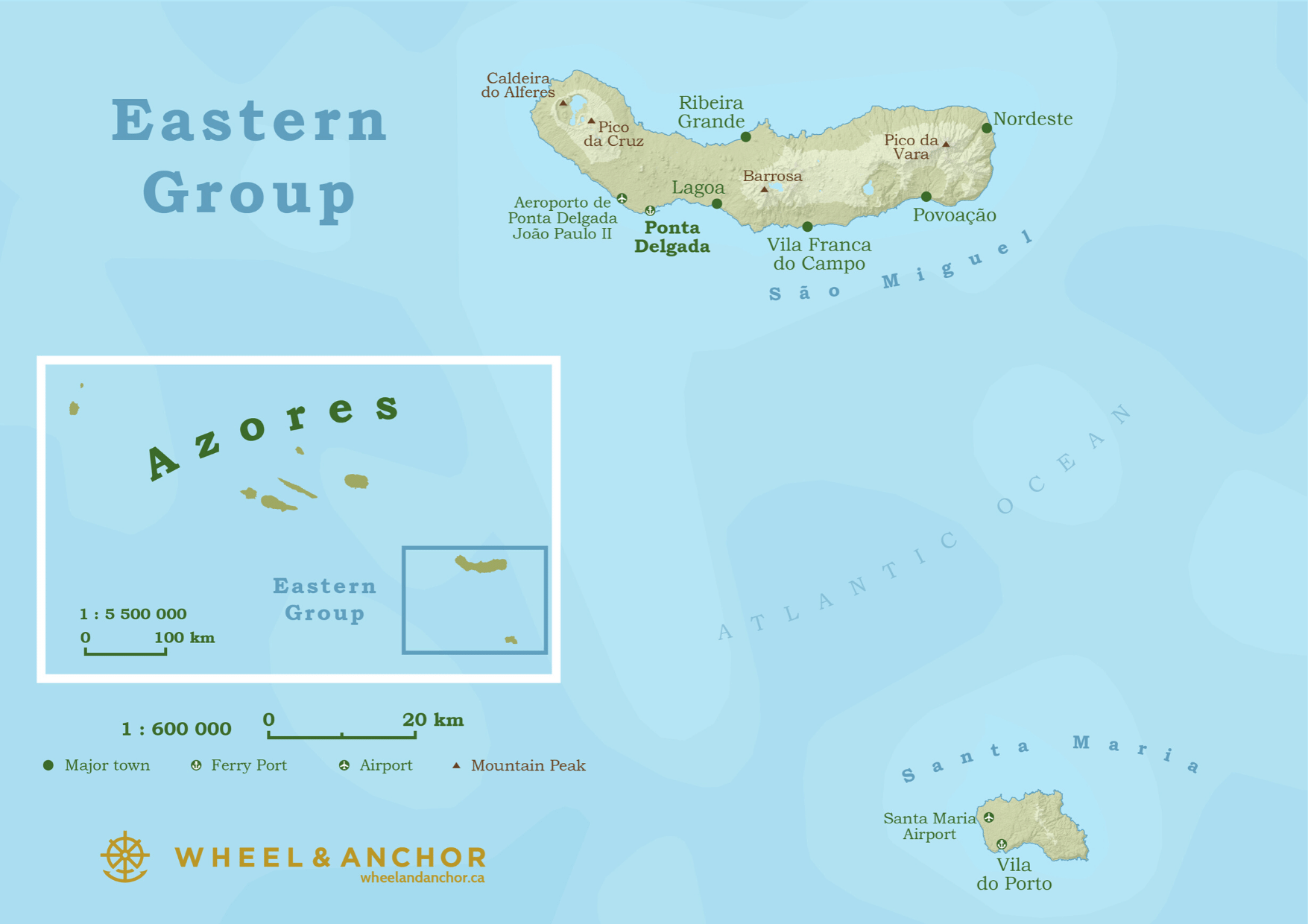 Map of the Azores - Eastern Group

São Miguel and Santa Maria are the closest of the Azores to the Portuguese mainland, lying about 1,500 kilometres west of Lisbon.

São Miguel is the largest and most populous of the islands, and it’s where you’ll find Ponta Delgada, capital of the Azores. This centuries-old municipality serves as the principal port for travellers coming into the archipelago and going to the other islands. While in town, visit Portas da Cidade, one of the Azores' most iconic monuments, and the nearby Igreja Matriz de São Sebastião, which hosts a collection of ebony, cedarwood, and jacaranda wood furniture and sculptures.

A short walk to the north past Museu Carlos Machado is the Jardim Botânico José do Canto, a garden that’s home to more than 800 native and non-indigenous plant species. 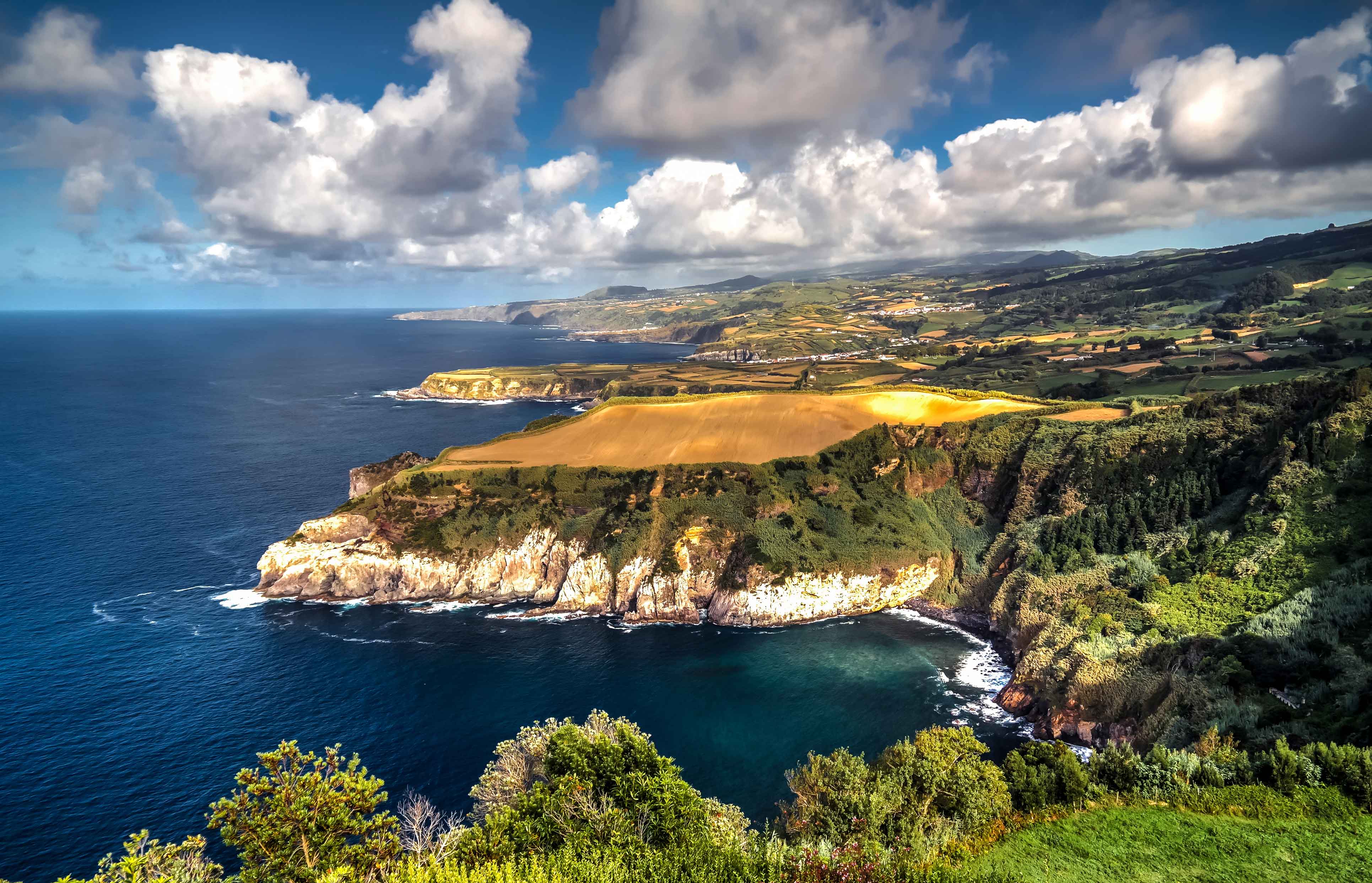 A viewpoint on Sao Miguel Island on the Azores

From Ponta Delgada, you can take a day trip to many nearby attractions. One of these is Furnas, a village of hot springs, geysers, and a placid crater lake. Have lunch at one of the local restaurants that use the vast amounts of steam under the ground to cook cozido nas caldeiras. A melange of meats and vegetables are stewed in a pot buried along the lakeshore for seven hours. It’s slow food, but you’re rewarded with a rich, hearty dish that gives you the energy you need to explore the rest of the island.

And there’s loads more to see, including the stunning twin lakes Lagoa das Sete Cidades (one has dark blue waters and the other bottle green), the iron-rich waters of the Velha Waterfall, and the only tea plantation in all of Europe.

Santa Maria is known for its white sand beaches that are perfect for swimming and other water activities. The most popular beaches on the island are Praia Formosa and Praia São Lourenço. When you’ve had your fill of the sun, sand, and surf, wander into the towns beyond these beaches and stroll around the cobbled streets lined with limewashed houses. Or head up Pico Alto, the highest point on the island for spectacular views in all directions.Also worth seeing are the Barreiro da Faneca, a rolling semi-desert in the northern part of the island, and the waterfalls of Ribeira de Maloás. Visit the historical churches and houses in Vila do Porto, the capital of Santa Maria. For a bit more history, travel to Anjos; there, a statue of Christopher Columbus stands next to the chapel where he reportedly attended mass to celebrate his return from the New World. 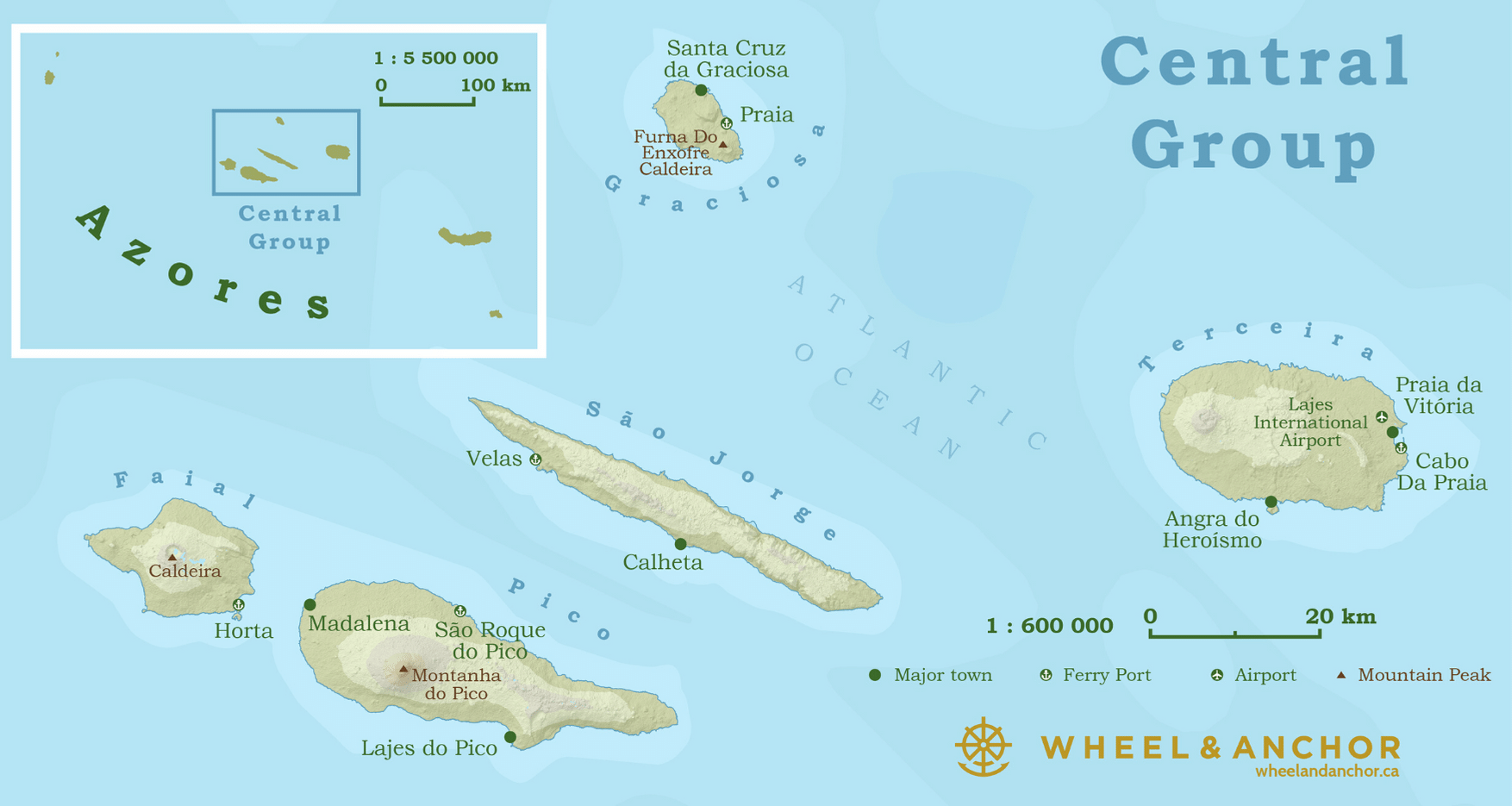 Map of the Azores - Central Group

Five islands make up the central island group of the Azores, each with unique features and attractions that set it apart from the rest.

Like the rest of the Azores islands, Terceira has volcanoes, the most popular of which is the extinct Algar do Carvão. In the summer months, hikers make the steep descent into the rainwater-fed lagoon at the bottom of the volcano’s chimney. Also, the island’s rich volcanic soil has given rise to some of the best vineyards in Portugal. Visit the Museu do Vinho in Biscoitos to learn about Terceira’s fine wines.

The island of Pico is dominated by a volcano, the eponymous Ponta do Pico, which is the highest mountain in Portugal. Like Terceira, Pico has fertile volcanic soils that have made it possible for vineyards to thrive on the island. Pico’s vineyards are laid out in grids surrounded by carruis, or low walls made of volcanic rock. This unique layout protects the vines from harsh winds coming from the sea; the volcanic rock also retains the sun’s heat, creating a warm microclimate for the vines. 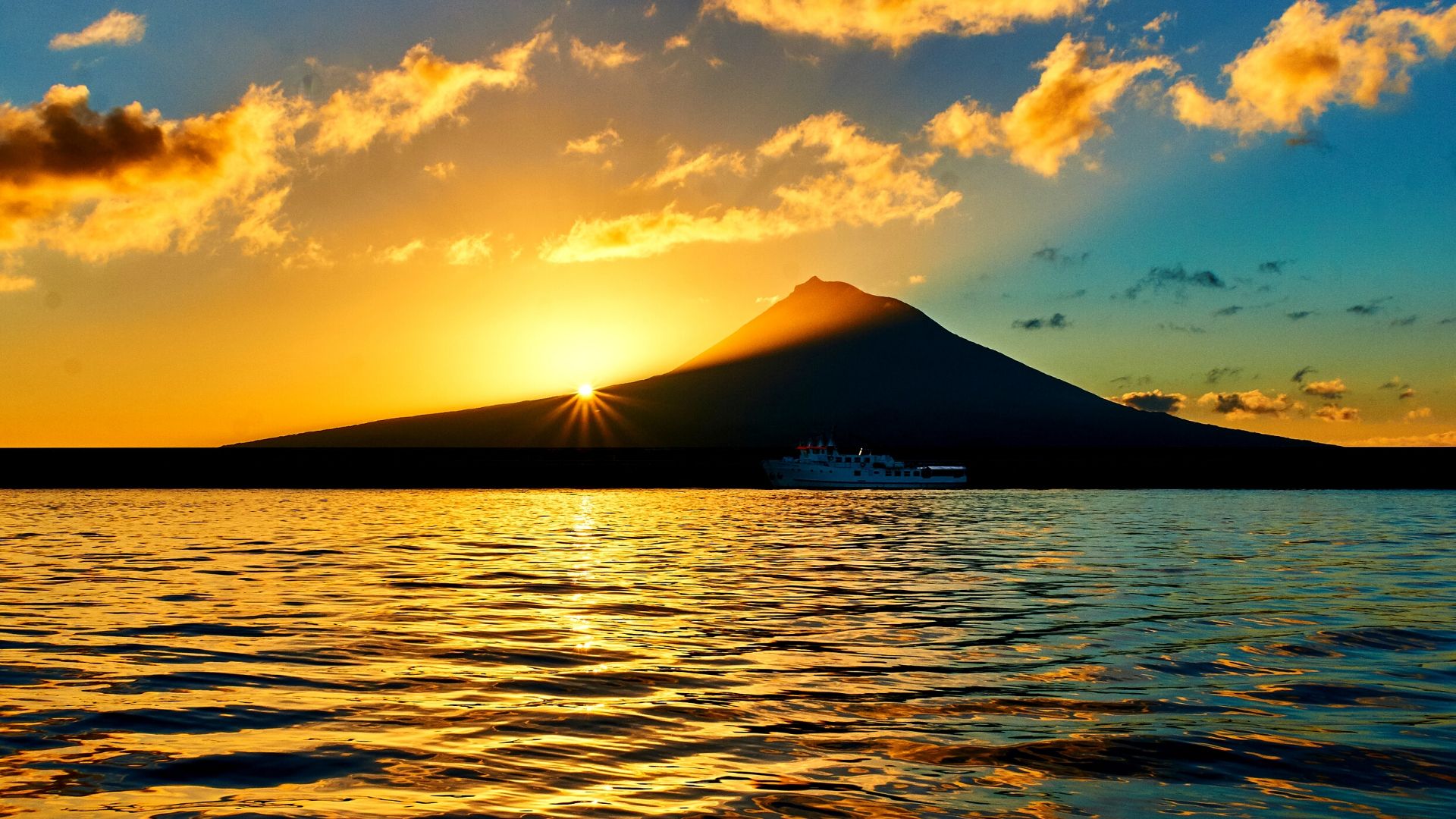 April to October is whale-watching season in Faial. Tours depart every day from the marina in Horta. After a day in the open sea, head to Peter’s Café Sport for their world-famous gin and tonic. Snack on runny cheeses, olives, cod fritters, linguiça, and blood sausage with fresh Azorean pineapple. There’s also Capelinhos to explore; this volcano last erupted in 1957, burying much of the surrounding area in ash and rock. The ruins of the Lighthouse of Ponta dos Capelinhos is now a museum where you can learn about the eruption as well as the volcanic history of the Azores.

Fans of the great outdoors will love São Jorge and the wide range of recreational activities they can do there. Climb mountains, dive off rugged cliffs into turquoise seas, and explore the caves of Montoso and Bocas do Fogo. There are many hiking trails all throughout the island, including Fajã dos Vimes, a 10-kilometre path down wooded hillsides to seaside villages, where you can dine on clams, cockles, and other tasty shellfish plucked right out of the ocean.

Since 2009, the entire island of Graciosa has been a UNESCO Biosphere Reserve, recognized for the efforts made by the islanders to sustain their needs without harming the natural environment. Along the 7-kilometre hiking trail that bisects the island, you’ll see traditional fruit, wine, and dairy farms, as well as red-turreted windmills. Another trail takes you up Pico de Caldereinha, from where you can spot the other central islands on a clear day. After all that walking around, take a break at Pasteleria Queijadas da Graciosa for rice cakes and custard-filled pastries, the island’s most popular delicacies. 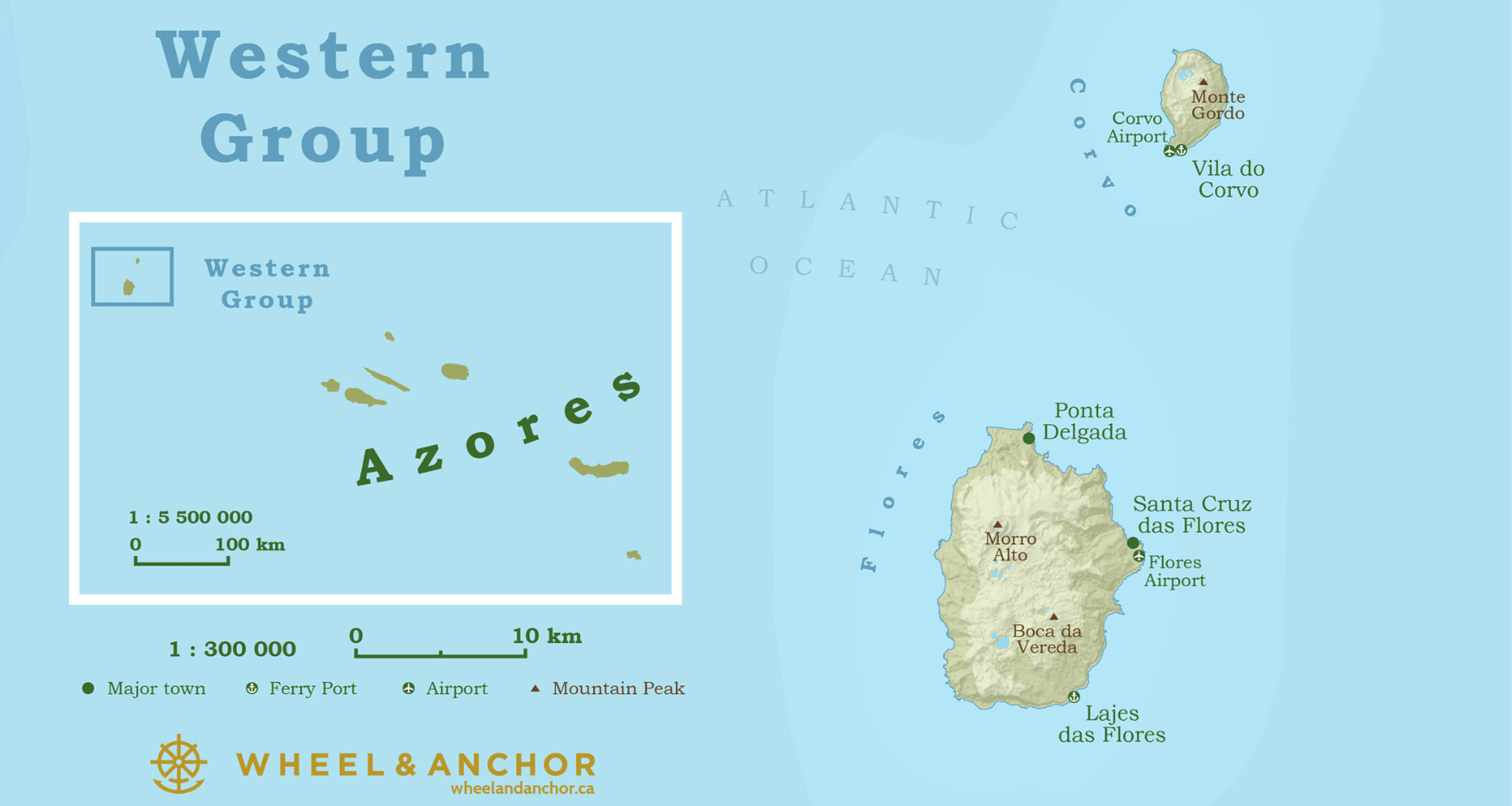 Map of the Azores - Western Group

Like Graciosa, Flores and Corvo are UNESCO Biosphere Reserves, and they are home to some of the most unique ecosystems in the world.

Flores got its name from the profusion of flowers that adorn its plains and plateaus year-round. In the summer, especially, masses of hydrangeas cover the island like a lilac-colored carpet. And thanks to the heavy rainfall it receives year-round, Flores is also one of the greenest of the Azores, rich in verdant forests teeming with wildlife. Ink-blue lagoons, towering waterfalls, and unique geological formations add to Flores’ charm. 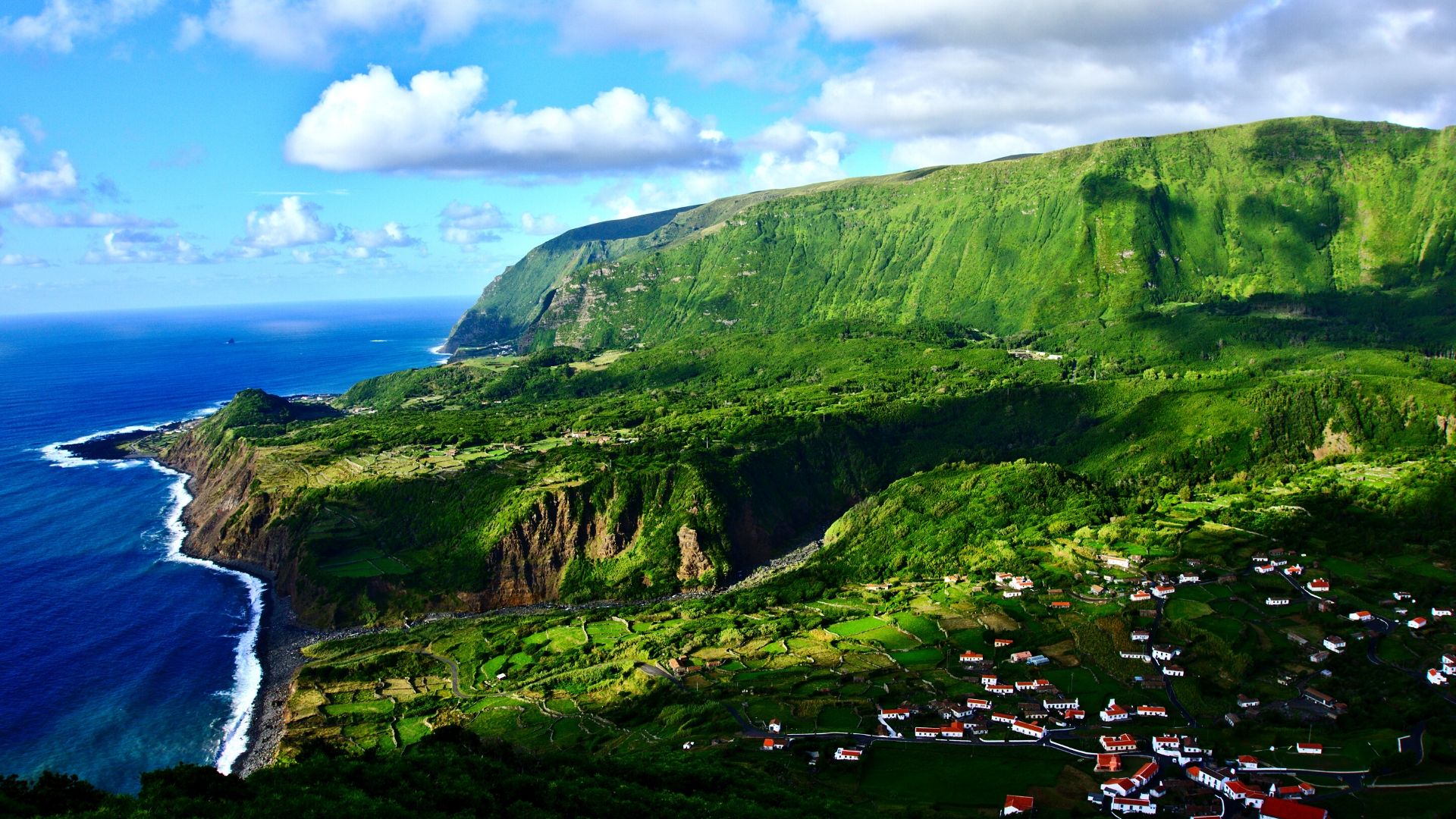 A viewpoint on Flores Island in the Azores

The smallest and northernmost of the Azores, Corvo is home to some 400 individuals who have kept the traditions of the island’s first settlers alive. The locals speak a medieval Portuguese dialect, catch fish and raise cattle for a living, and bolt their whitewashed houses (most of them located in the island’s single village) with an ingenious lock made of juniper wood. Aside from the residents, you’ll encounter birdwatchers and divers in Corvo. The latter gravitate to Gamela, a cave with a skylight-like opening just outside town, and to Caneiro dos Meros, where schools of dusky grouper swim amid lava formations.

In Novemeber 2020, Wheel & Anchor is taking its tribe of travellers to the Azores. Join us on whale-watching tours, dips in thermal waters, and scenic hikes, and revel in the natural beauty of the islands.

Or, join us in April 2021 for 5 nights in the Azores followed by 5 nights exploring the culture and cuisine of Porto, including a cruise on the Douro river - details for this program can be found here. 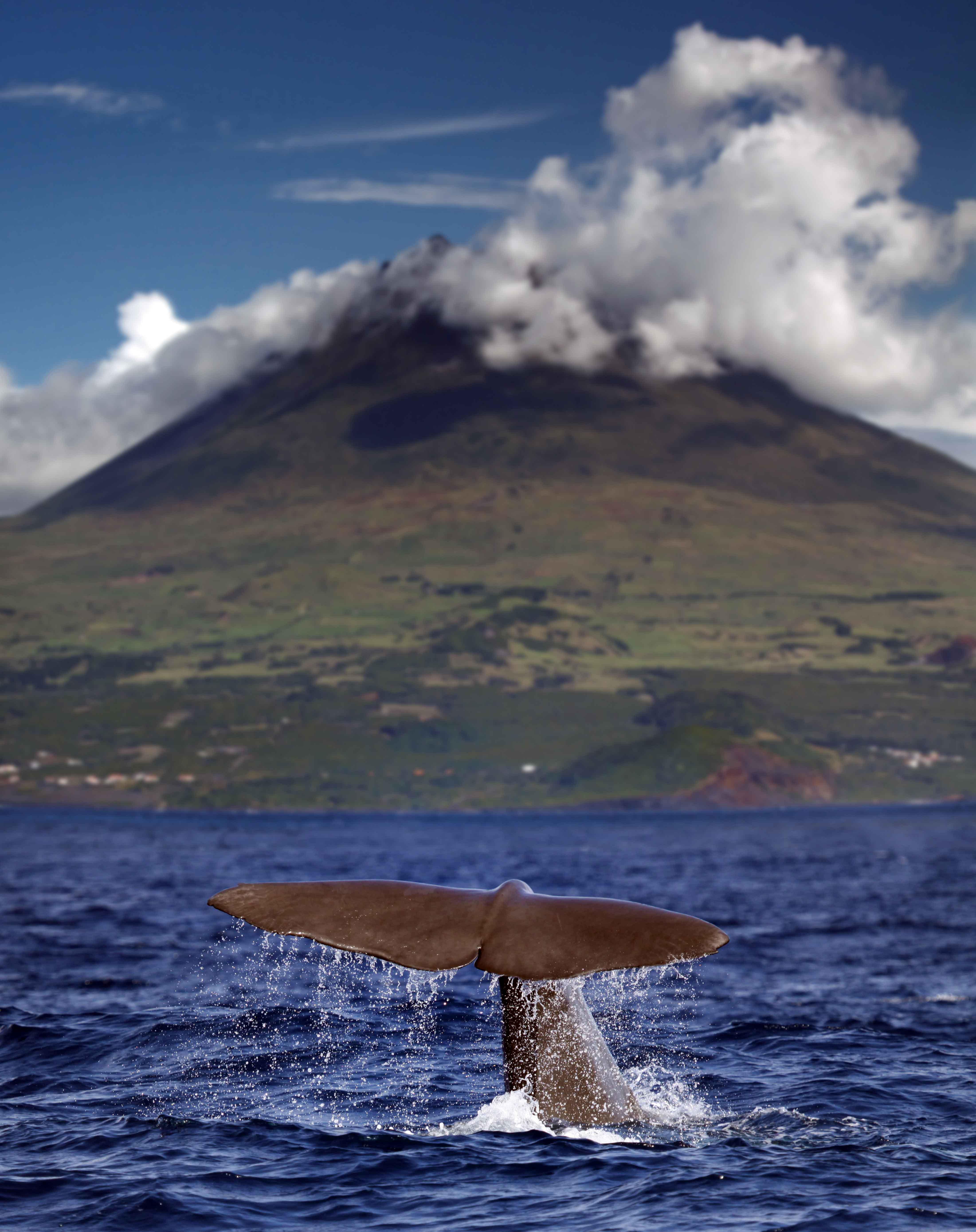 The Azores: Jewels of the Atlantic

Join Wheel & Anchor for a short getaway to a tiny archipelago in the middle of the Atlantic Ocean that is the Azores.