The Dark Past Of Malta’s Megalithic Temples

At first, you don’t see it. It’s just an unusually dense collection of enormous limestone rocks on a remote, beautiful Malta hillside. They’re deeply pitted and yellowing where the wind and rain have nibbled them away, softened by the sky and leaching back into the earth, a little more every year...

Then your perspective shifts and things become clearer. Those two upright stones are the edges of a doorway. That flat rock you’re standing on is a flagstone. The edges of these stones are far too regular to be natural - and when you lean close, you see their surface is dimpled, like a modern golf ball....

Suddenly you see where you really are. You’re standing in the entranceway to one of the world’s oldest standing structures - a true gateway to the prehistoric past - and you feel dizzy with a kind of chronological vertigo.

Who lived here? What was this place used for? What exactly are you really looking at? 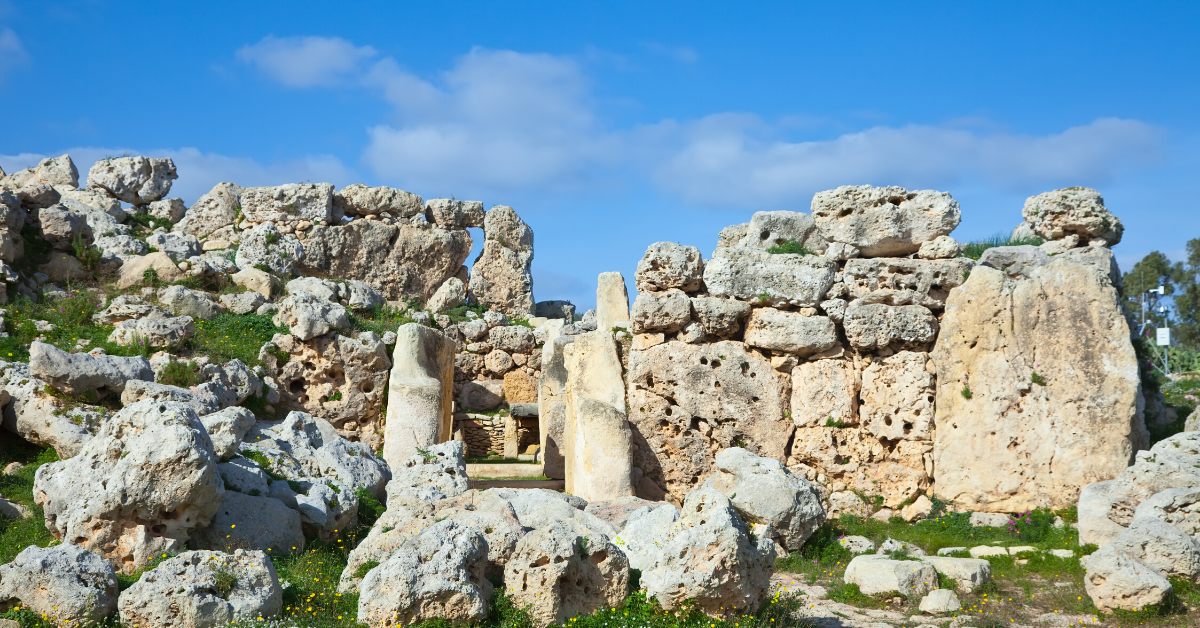 The Megalithic Temples of Malta built approximately in 3600 BC

With today’s steady stream of confident-sounding books and TV documentaries about the past, it’s easy to feel like history has now been stripped of its mysteries by modern scholars and scientists. It seems like we know what happened, we know when it happened, and we know who it happened to.

But if you take any academic course of historical study, you’ll find something amazing.

You’ll see entire academic careers spent arguing over events that happened as recently as half a century ago, or even just a few decades. You’ll discover the fascinating, frustrating world of documentary bias, where events in written records are subtly twisted into propaganda to glorify the achievements of victors, and to minimize or even overlook the actions of others. You’ll be amazed at all the different interpretations that exist about all those things you learned about at school...

In short, you’ll discover there is no “one true history” - and everything you learned is highly informed guesswork.

Go backwards through the centuries, and things quickly get even more bewildering. Take the most famous playwright in English history. Think you know Shakespeare’s work? You don’t. Nobody does. Not only do we know of Shakespeare plays that have failed to survive (including Cardenio and Love’s Labour Won and a few dozen others we don’t know the name of), there’s also a question mark over whether the existing plays attributed to Shakespeare are fully his or posthumous rewrites by unofficial, self-appointed successors to his legacy.

Go back a couple of thousand years, and it gets worse. The Greek playwright Sophocles (497-406 BC) is today one of just three Ancient Greek tragedians whose work has survived. We are lucky to have seven of his plays in their original form, including the famous Oedipus Rex - but we also know he wrote over 120 of them, and he may not have been the most popular or prolific dramatist of his day! We simply don’t know.

The study of history is the study of how despite possessing vast amounts of documentary evidence, and despite having the people of the time writing directly to us in their own voices, we still struggle to understand what actually happened.

And - this is for history. What happens before this, when the records run out, the voices go silent and we have to rely on nothing but the archaeological remains to tell the story?

Short answer, speaking as an ex-archaeologist: it gets mind-bogglingly difficult.

Despite the existence of fabulously clever techniques like radiocarbon dating, ice-core sampling and dendrochronology (tree ring analysis), you can’t be sure of the dates. You can’t be sure that what you’re looking at is a “snapshot” in time, or the result of centuries of rebuilding, reuse and the kind of general disturbance you get when generations of humans succeed each other in the same place. You can’t be sure who was there if they didn’t write their names down in some way.

In other words, to quote archaeologist Stephen Dean, it’s like “a jigsaw puzzle, except you can’t cheat and look at the box, and not all the pieces are there.” 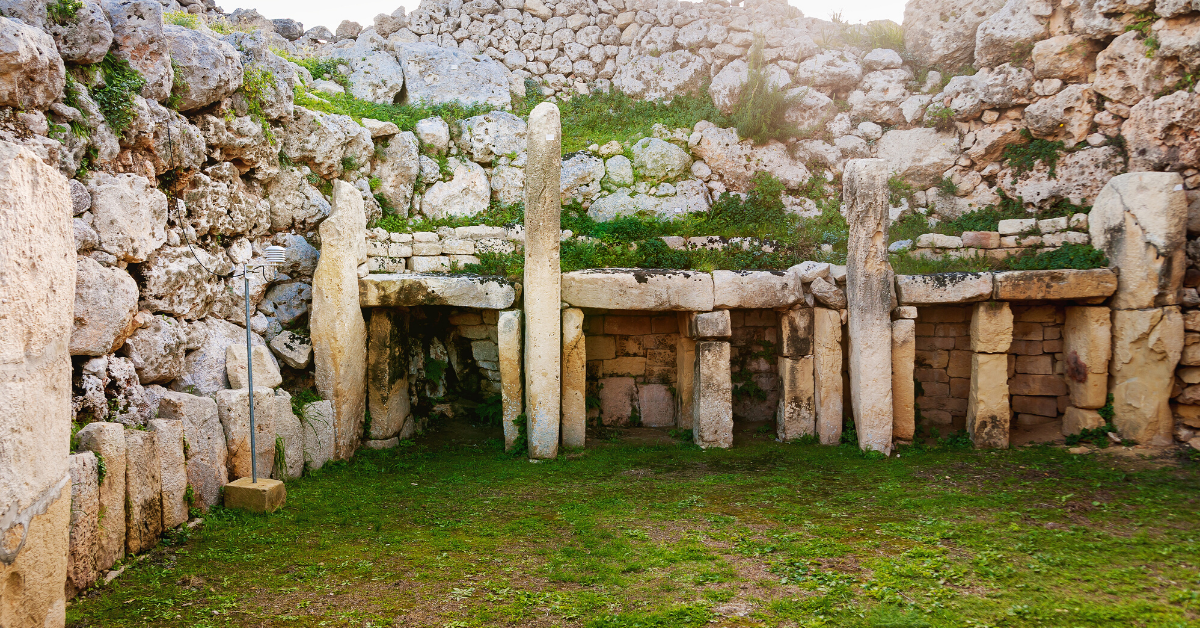 When you’re standing on a Maltese hillside, faced with the ruins of some of the oldest temple complexes in (pre)history, filled with the kinds of questions anyone would ask in these circumstances - well, don’t get your hopes up. There are no hard and fast answers here.

Because, how could there be? You’re looking at megalithic (“huge-stoned”) buildings that pre-date Stonehenge, meaning they’re thousands of years old. The gulf of time separating you from the people who built these temples is measured in hundreds of generations - and over a million and a half days of sweltering sun and increasingly acidic rain have ravaged what’s left. What could you possibly learn here?

In the absence of hard answers, there are theories. It seems the Neolithic people of Malta built in three distinct phases, in styles that seem to have been copied right across mainland Malta (sometimes called Valletta) and its smaller neighbour, Gozo. The height of the temple-building happened during 4400 BC - 2500 BC, and after this period, the Bronze Age population (remembering that “Neolithic” and “Bronze Age” are our terms for them, not theirs) repurposed these vast limestone complexes for their own largely mysterious purposes.

If you’re visiting the temple of Ħaġar Qim in the south of the main island, one thing might make you blink: the huge white canopies stretched over clusters of buildings, jarringly out of place. These protective tents are a very recent attempt to stop rainfall dissolving more of the limestone remains. Elsewhere, iron girders and scaffolding speak of other ongoing conservation work. 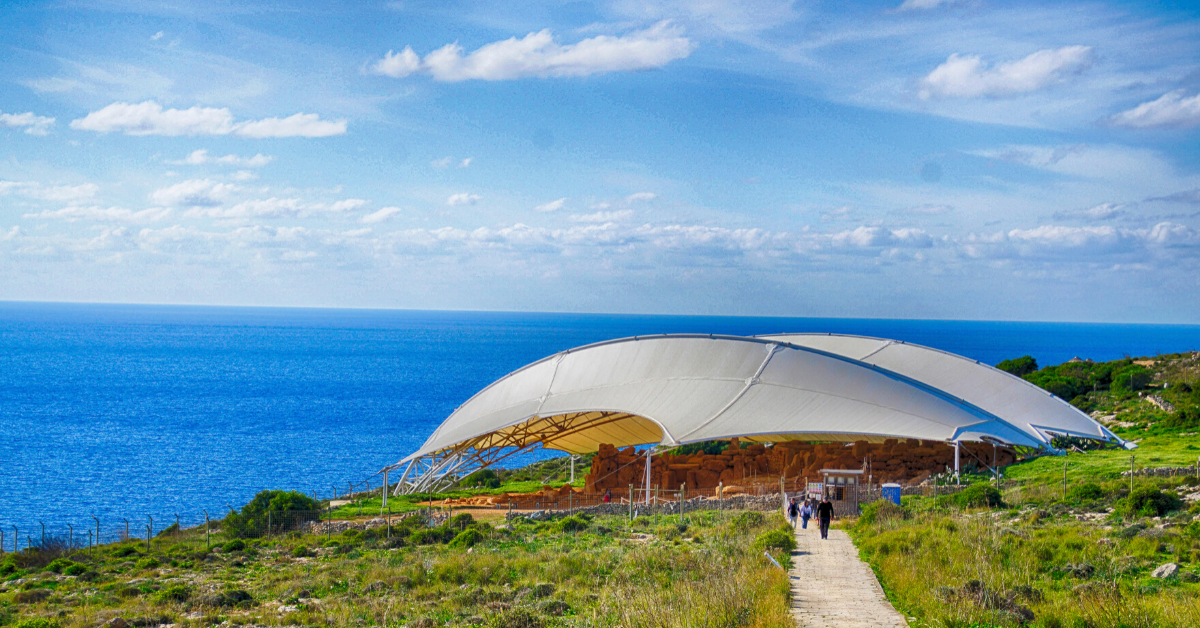 But look past that, and you feel like you can almost see it. Huge semicircular spaces (“apses”) are defined by curving lines of standing stones. Passageways take you deeper into the temple (but was it really a temple?), dive through walls and open up into courtyards. The afternoon’s Mediterranean sunlight sets facades aglow in a way that makes you wonder if they were built to capture it: this seems likely, since parts of other temples seem to be aligned with the rising sun during solstices and equinoxes.

There are tantalizing glimpses of human-lived experiences: benches for resting on, flagstones seemingly worn by the passage of many human feet. Squint, and you can just about see the people here, even if you can’t quite imagine what they were doing or why.

There are no writings that survive from the time of Malta’s megalithic temples. No stories passed down by word of mouth, no legends that shed light on a deep time that is entirely dark to us. To look at these remains is to peer at the limits of knowledge about ancient humanity. It could be that future discoveries and research will unlock some of these mysteries and bring these people into focus. (It’s possible, maybe not likely.)

But for now, this is what we’ve got: the stone equivalent of shadows thrown on a wall, endlessly open to interpretation, and a poignant glimpse at how little we know about who we once were.

It feels like enough to experience in one lifetime.