Five fascinating facts about the Panama Canal, the shortcut of the world

Five percent of all global trade passes through the Panama Canal. Every day, dozens of cargo ships go through this 82-kilometre waterway, cutting across the Isthmus of Panama and on to parts unknown. Cruise ships and smaller passenger vessels also make this passing daily, shuttling tourists from the Pacific to the Atlantic, and vice versa. By navigating the canal (like we’ll do when we visit Panama in March), ships don’t have to travel an additional 5,600 kilometres around the tip of South America to get from one ocean to another.

Sun rising over the bridge of the Americas closing the gap between North and South America at the Panama Canal in Panama City, Panama.

But this transoceanic shortcut almost never came to be. From the outset, the canal’s construction was fraught with controversy and a raft of challenges. For one, Panama wasn’t always the first choice for the canal. And for another, no one really knew how to go about building it. As such, the fact that the Panama Canal exists today is a wonder in and of itself, and the story behind the canal’s construction is just as fascinating as this great marvel of engineering.

It was the brainchild of an emperor/king

In 1513, Vasco Núñez de Balboa, explorer and newly appointed governor of the colony of Darién on the Isthmus of Panama, set south in search of gold. While he didn’t find any, he did stumble upon the Pacific Ocean. In a rather dramatic scene, he waded knee-deep into the water and, holding his sword and the Spanish flag aloft, claimed the Pacific and all of its islands and shores for Spain.

When news of Balboa’s discovery reached Europe, Charles I, King of Spain (also known as Charles V, Holy Roman Emperor) ordered a search for a natural waterway between the Atlantic and the Pacific, thus easing the voyage between Spain and its colony in the New World, Peru. It took 15 years to determine that no such channel existed. Charles promptly sent surveyors out to Panama to see if one could be built. Again, Charles ended up gravely disappointed, as the surveyors concluded that doing so would be impossible, given the vast mountain ranges, plateaus, and jungles separating Panama’s Atlantic and Pacific coasts. And so Charles’ ambitious plan had to be tabled — at least for the time being.

The United States wanted a canal in Nicaragua

It would be another 300 years before any country would take any interest in creating a water passage across the narrow spit of land that is Panama. In 1848, the discovery of gold in California prompted thousands of prospectors to make the treacherous sea voyage from the East Coast around the tip of South America to the West Coast. Others chose the land route, which was no less dangerous or arduous. Some sailed to the Atlantic coast of Panama, trekked through the jungle for about a week, and then sailed from the Pacific coast to San Francisco.

Eventually, the United States constructed the Panama Railroad (now the Panama Canal Railway); linking the Atlantic and Pacific coasts, it greatly facilitated transportation and trade in the Western Hemisphere. Around this time, the US began conducting surveys of the region, intent on constructing a canal that would make crossing Central America faster and more efficient. The surveyors identified the three most favourable routes to be across Mexico, Panama, and Nicaragua. The US preferred the Nicaraguan crossing, and spent the next three decades making plans and negotiating with all nations involved in the construction of the canal. Nothing would come of this effort.

Instead, it was France that would bring the dream of a transoceanic canal in Central America into fruition — sort of. In the 1870s, following the completion of the Suez Canal, a project led by Ferdinand de Lesseps — a Frenchman, no less — France thought a similar project could be carried out with little difficulty. And so in 1876, La Société Civile Internationale du Canal Interocéanique was created. Within two years, the society would obtain a concession from Colombia (Panama was a mere Colombian province back then) to dig a canal that would connect the Pacific and the Atlantic.

De Lesseps was put in charge of this new venture; now a household name because of his success in Egypt, he was able to persuade wealthy investors and ordinary citizens to put nearly US$400 million into the project. He also convinced the French government that digging a sea-level canal through the mountains of Panama would be the best course of action, never mind that a team of experts recommended an elevated canal with locks.

For all his success with the Suez, de Lesseps was a diplomat, not an engineer, so he was not equipped to deal with the challenges that Panama’s terrain and climate would bring. Four years after excavation began on January 1, 1881, it became apparent to all except de Lesseps that his plan was impractical. By 1885, thousands had died due to rampant disease, and the frequent floods and mudslides were causing engineering and financial problems. By the time the project was suspended in May 1889, about US$234.8 million had been spent, tens of thousands had died, and the canal was nowhere near finished. De Lesseps, along with several others, was found guilty of mismanaging the project’s funds, but got off with a slap on the wrist.

Another French company took over the work in Panama almost immediately. This time, the plan was to build a two-level canal with locks. However, nothing came of this, primarily due to continued US speculation in Nicaragua. The United States bought all holdings of the New Panama Canal Company in 1902, secured the rights to build the canal from the newly created Republic of Panama in 1903, and broke ground in 1904.

Thousands of workers died during the canal’s construction

Actual construction, however, would not commence until 1907. For three years, Afro-Caribbean contract workers took off where de Lesseps’ team started, digging and dredging using rusting equipment left behind by the French. Living in ramshackle buildings with no proper sewage or sanitation, thousands of workers soon contracted malaria and yellow fever. Others suffered traumatic, disfiguring injuries. While many lived to tell the tale, many others did not.

Official reports place the number of deaths at the canal site between 1904 and 1914 at 5,609. An additional 22,000 workers died during the French phase of the project, and some 12,000 during the construction of the Panama Railroad. The great majority of those who lost their lives were black.

While living and sanitation conditions had improved greatly by 1906, black workers did not have proper housing. Instead, they lived in tents and tenements that left them exposed to the elements and disease-carrying mosquitoes abundant in Panama’s jungles. As such, despite the availability of medical treatment, they continued to die at a rate 10 times that of the white workers.

The canal was expanded in 2016, allowing more ships to pass through yearly

The Panama Canal finally opened on August 15, 1914. Although a large celebration had been planned, the opening of the canal ended up being a rather subdued affair, as World War I had just broken out in Europe. However, many still gathered to see the American cargo and passenger ship SS Ancon pass through. Her nine-hour journey took her from the Atlantic coast of Panama, on to Gatún Lake and Miraflores Lake, and finally into the Pacific. 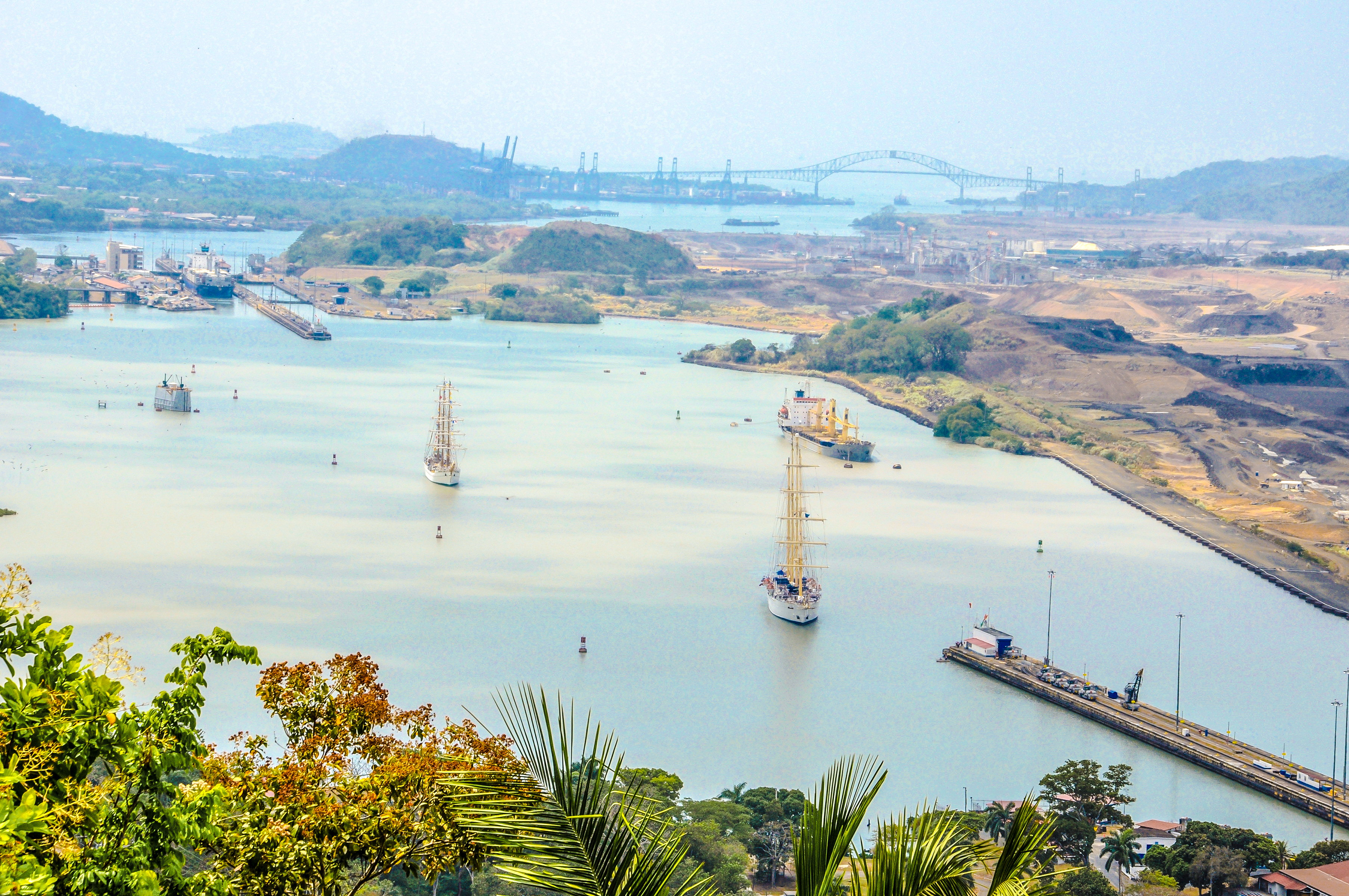 In 1999, the United States officially turned over control of the Panama Canal to Panama. In 2007, the Panamanian government rolled out the Panama Canal expansion project to accommodate ships larger than what the original infrastructure allowed. To do this, a second, larger lane with two new sets of locks was dug, and the depth and width of existing channels were increased. The maximum operating water level of Gatún Lake was also raised.

Today, about 14,000 ships pass through the Panama Canal every year, bringing in over US$2 billion in revenue from tolls. About 11 percent of these ships are super-sized Neopanamax (or New Panamax) ships, which are about one and half times larger than and carry twice the cargo of relatively smaller Panamax ships.

Passenger and cruise ships are also among those that travel down the Panama Canal yearly. Carrying anywhere between 20 and 3,000 passengers, these ships take a little longer than their cargo counterparts to make the full transit — an average of 11 days as opposed to merely 8–10 hours. This allows for making plenty of stops along the way so that travellers can truly appreciate the wild beauty of the rainforests that stretch for miles on either side of the canal.

Experience the thrill of travelling through the Panama Canal when you join Wheel & Anchor Weekends: Panama in March. Go ocean to ocean and gain valuable insight into the history of the canal, as well as the rich culture and wildlife of the country of Panama itself. Sign up today. 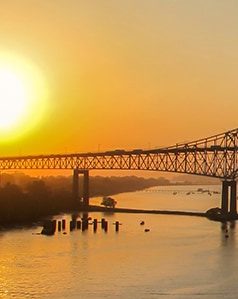 Enjoy sun-drenched beaches, turquoise waters, and unique history of this tiny country that connects the continents of North and South America. Always a transfer, never a destination - until now, Panama!