Sweet and savoury street food to try in Sicily

Sicily is an island smack dab in the middle of the Mediterranean. It’s part of Italy yet it’s not, and this duality couldn’t be more obvious in its food. Sicilian cuisine is a melange of Greek, Spanish, French, Arabic, and Italian culinary traditions. Even the simplest and humblest of Sicilian food reflects these influences, and this is something you will taste in the wide variety of street food in Sicily’s markets and roadsides. 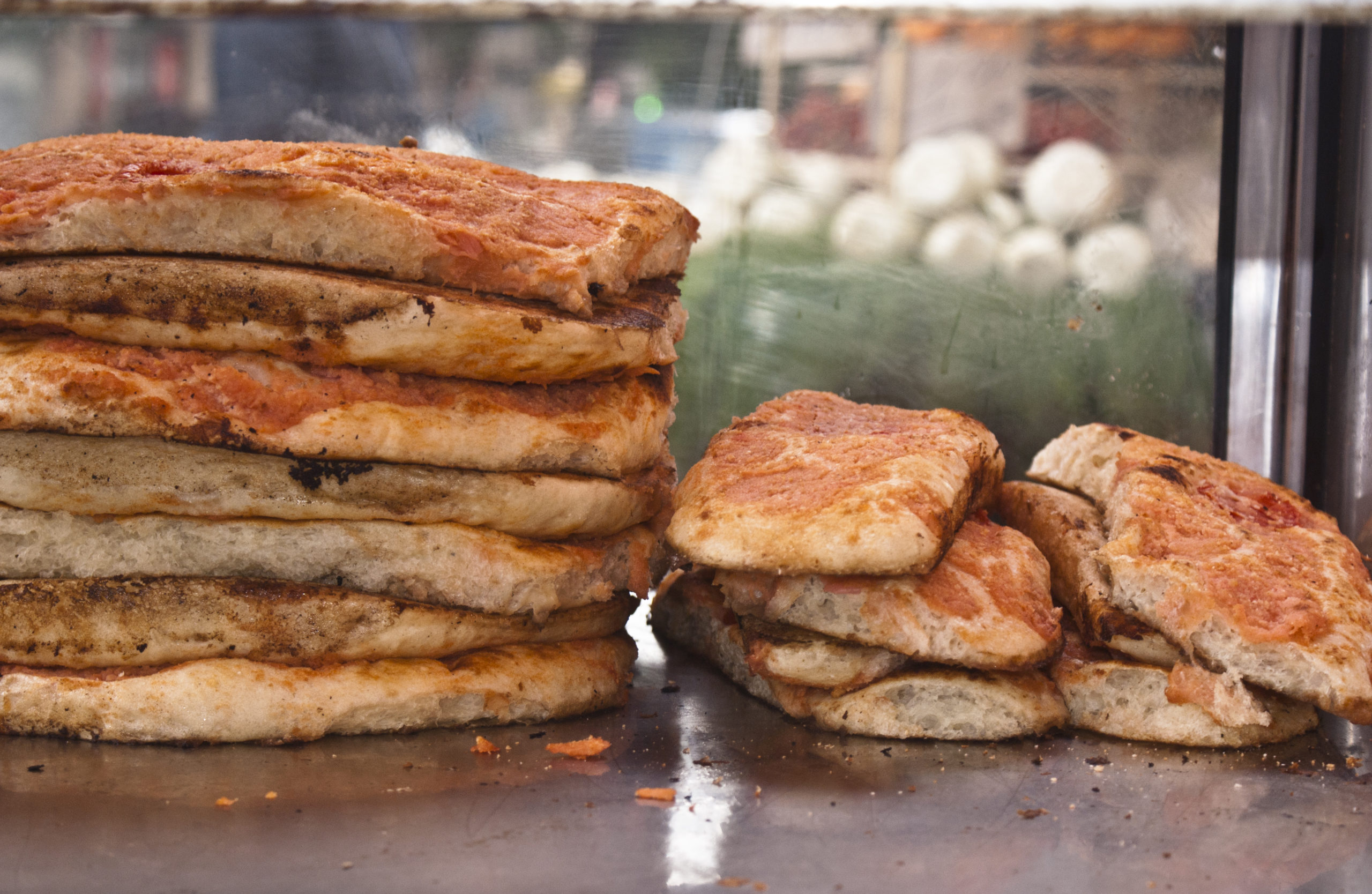 Nothing says comfort better than pizza, and that’s exactly what you’ll get when you bite into a slice of sfincione. It’s pizza Sicilian style: rectangular slabs of spongy bread slathered with tangy tomato sauce, piquant anchovies and onions, gooey caciocavallo cheese, aromatic oregano, and a drizzle of virgin olive oil. It’s a familiar yet exciting way to begin your foray into the world of Sicilian cuisine. Originally a Christmas delicacy, sfincione is now available year-round in both streetside stalls and trattorias throughout Palermo and the island. You can also grab a slice from the many sfincionari peddling this tasty treat aboard tiny three-wheeled scooter vans. 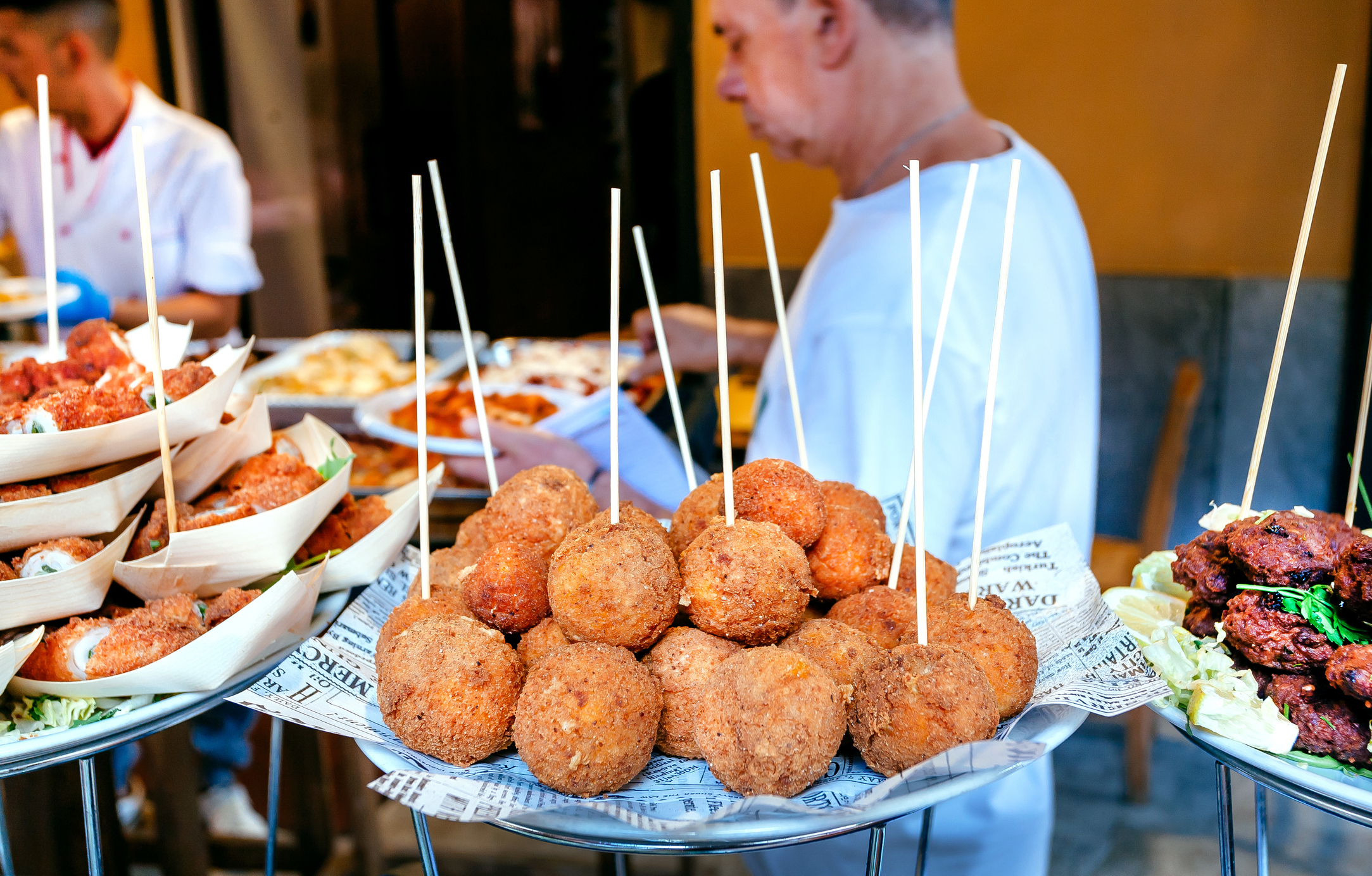 Like sfincione, arancini were traditionally served only around Christmastime (Sicilians gorge on them during the Feast of Santa Lucia on December 13), but are now a part of everyday life in Sicily and many parts of Italy. So-named because of their resemblance to oranges (arancia in Italian), arancini are made from creamy risotto stuffed with any manner of filling — cheese, peas, ragù, shrimp with pesto, béchamel with cheese and ham — rolled in breadcrumbs and deep-fried to golden-brown perfection. Bar Touring in Palermo is famous for the Bomba, their fist-sized, one-pound take on arancini, while I Cuochini — purveyor of scrumptious street food since 1826 — has mini arancini with a variety of stuffings.

No other Sicilian dish showcases Sicily’s North African roots better than panelle, chickpea fritters flavoured with parsley and a dash of pepper. Enjoy panelle as the Sicilians do — crammed into a fresh sesame roll and finished with lemon juice and olive oil (pane e panelle). You can also build your own panelle sandwich and load it with eggplant (panelle e melanzane) and potato croquettes (panelle e crocchè), among other delicious ingredients.

Those potato croquettes can also be enjoyed on their own. Also known as cazzilli (literally “little penises”), crocchè are best served straight from the fryer, piping hot and wrapped in brown paper. Parsley or mint and lemon juice add zing to these Sicilian street food favourites, as do parmesan cheese, which — though not traditional — is a welcome addition to these delectable snacks.

Scacce (singular scaccia) are the Sicilian cousins of the Italian calzone. Made of unleavened wheat dough stuffed with different ingredients (ricotta and onion, cheese and tomato, tomato and eggplant, etc.) and folded on itself three or four times, scacce are served throughout Palermo and elsewhere in Sicily. However, they are ubiquitous in the southern part of the island, particularly in the province of Ragusa, where these delicacies originated. 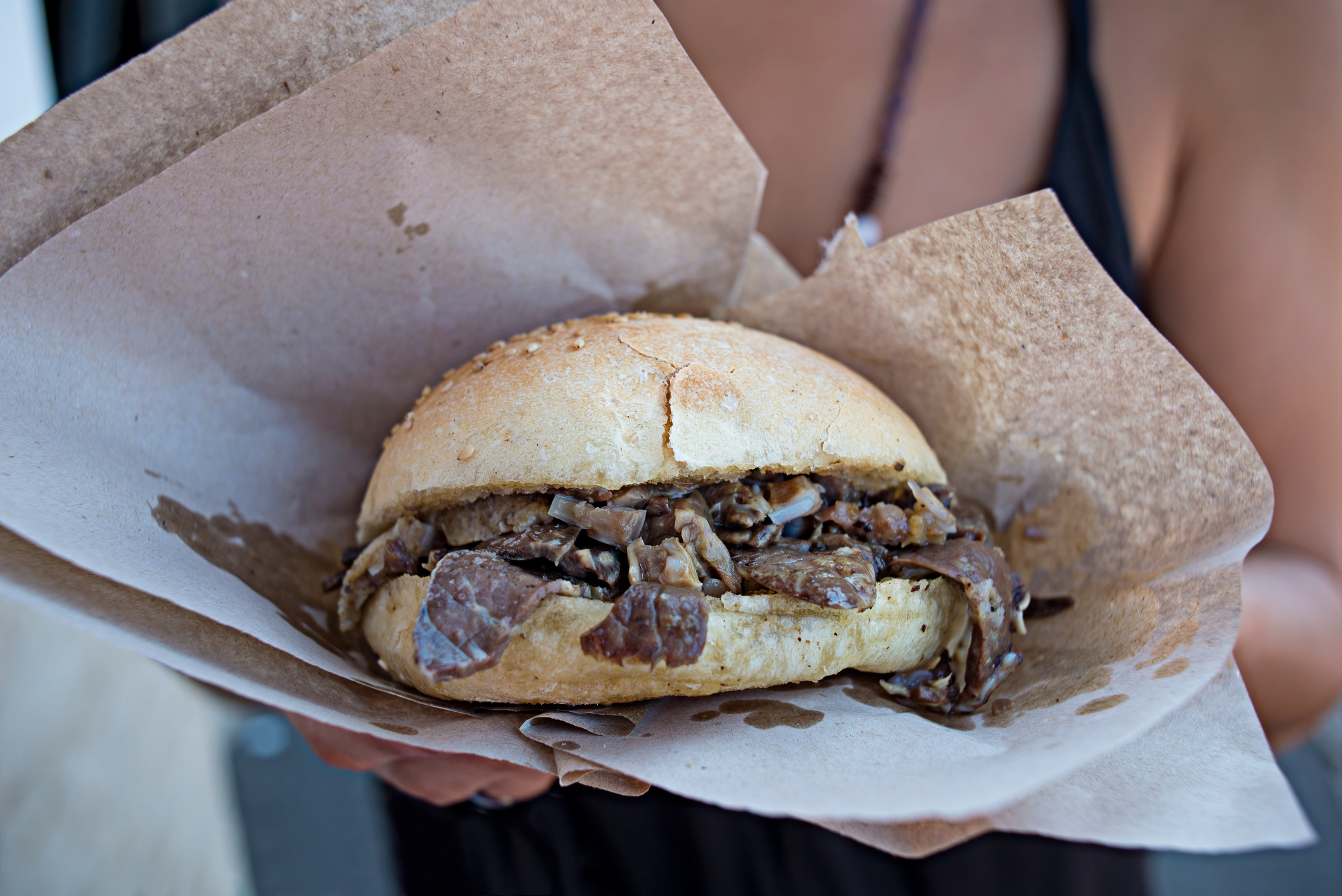 Or, in plain English, “bread with spleen.” Veal spleen, to be exact, boiled and then fried in lard, and stuffed in vastedda (a soft sesame roll) along with veal lung and trachea. Vendors of this quintessential Sicilian snack will ask you if you want it maritatu (with caciocavallo or ricotta cheese) or schettu (with only a squeeze of lemon). Get one of each and savour the differences in texture and flavour.

Essentially, both of these Sicilian street food staples are prepared the same: by wrapping some kind of protein around a scallion stalk and cooking it over hot coals. The difference is that mangia e bevi is made with bacon, and stigghiola is made with sheep or goat intestines. While the former is an obvious must-try — because who doesn’t love bacon? — don’t knock the latter before you try it. Its smokiness and saltiness are brought out by the requisite scooch of Sicilian lemon, and it’s surprisingly juicy beneath all that crispy char. 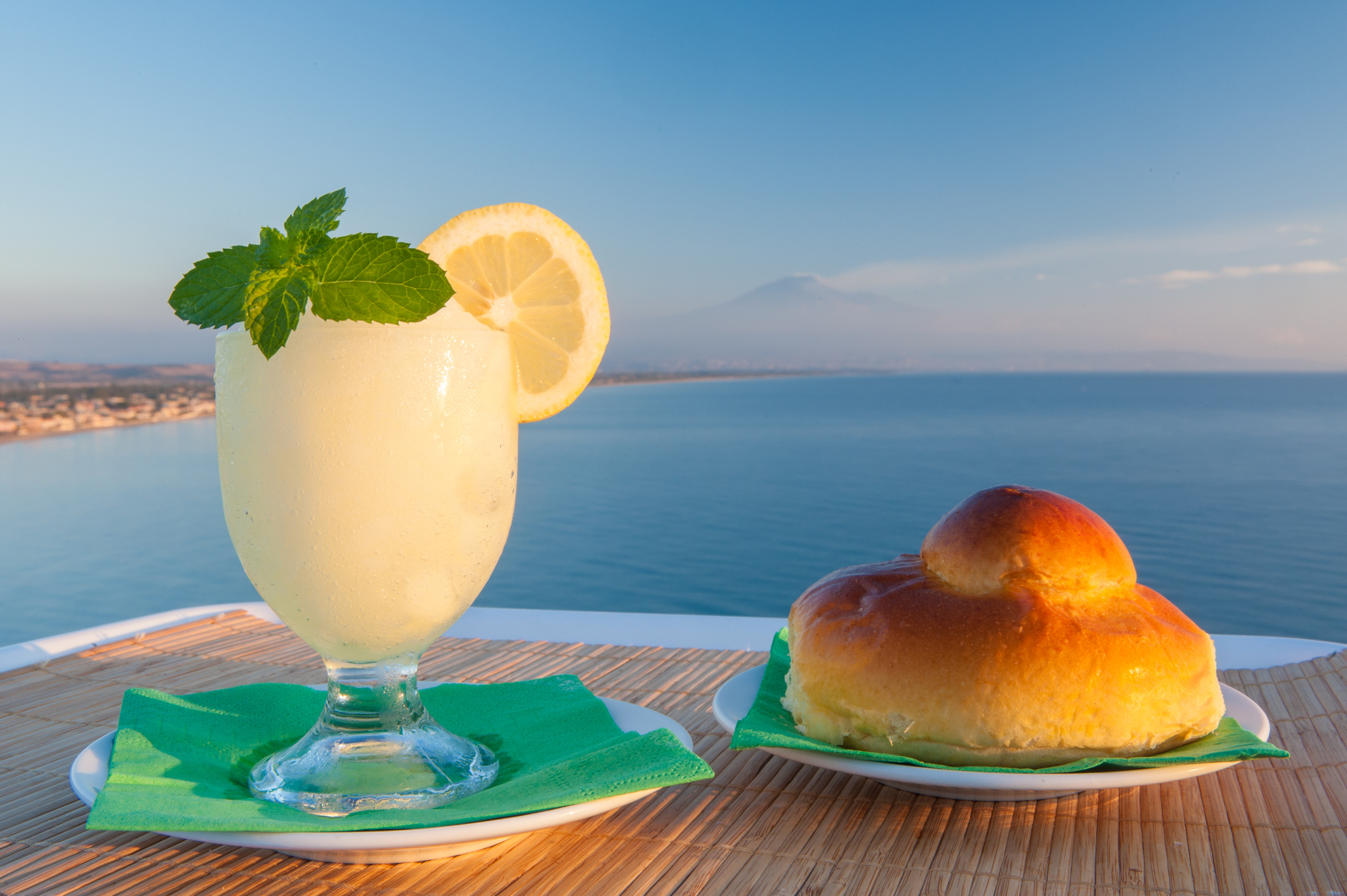 Sicily is the birthplace of the granita, which is a popular summertime snack on the island and throughout Italy. Surprisingly, it’s also commonly consumed as a breakfast food during the hot summer months, served with a side of brioche for scooping up the icy crystals. In Palermo and the Sicilian west coast, granitas are chunkier, made by freezing a mixture of water, sugar, and various flavourings, typically lemon, orange, almond, pistachio, and mint. Once frozen, the mixture is scraped to produce the crystals, which are then served in a glass or cup.

Brioche con gelato is another typical summertime treat that many Sicilians enjoy as a breakfast food as well as a midday snack, no matter the season. This dish consists of several scoops of creamy gelato in a soft, eggy brioche bun, topped off with whipped cream and chocolate shavings or nuts. How to attack this ice cream sandwich before it melts could prove to be a problem, but one that you’ll be glad to try to solve over and over again.

Take the cannoli. Because no one in their right mind wouldn’t. Another Sicilian original, these crispy pastry tubes filled to the brim with sweetened ricotta range in size from finger-like cannulichi to larger ones more common south of Palermo. Topped with candied fruit, chocolate chips, or highly prized Bronte pistachios, you will love every bite of this decadent dessert.

Sicily has a lot more to offer in terms of cuisine, and Wheel & Anchor is offering you the chance to taste all of them should you join us on our Sicily, Malta, and the Aeolian Islands tour in May 2021! Get all the full itinerary and details here.