Why There’s Nothing Silly About Scilly, England’s Sub-Tropical Island Getaway

When I first see it, I don’t believe it.

I rub my eyes hard. The wind’s strong on this late Spring afternoon and the tears are streaming down my cheeks - so maybe that’s it. Young eyes can play tricks. I wipe them and squint harder.

“That’s a palm tree! Like on a desert island!” I yell to my Dad, loud enough for a few locals to turn and smile at me. “But - there aren’t any palm trees in England!”

If I was talking about mainland England, and if I also meant “growing out of doors, not under glass”, I was entirely on the money. There’s a good reason palms are associated with tropical climates: on the whole, the UK is just too changeable in temperature and rainfall, too unpredictable during the winter months where just one hard frost can wreak havoc.

But in a few places around the coast (like the Isle of Wight, or Burgh island offshore from Devon), maritime climates that are never too hot or too cold allow palms to survive - and we’re heading for one such place right now.

The colour of the water is astonishing: a rich aquamarine, cast in sunbeam-lit bands all around us, the sunshine (there’s sunshine! Where did all the clouds go?) dancing on the surface of the rapidly shallowing water. I can see golden beaches, brightly coloured foliage - and more palm trees. Dozens of them.

Except - we really are. 28 miles to the east of me, Land’s End in nearby Cornwall gets all the credit for being the most southwestern tip of the UK (as in “Land’s End To John O’Groats”, that epic thousand-mile trek across the island of Great Britain) - but that honour actually goes to St. Agnes, one of the five inhabited granite outcrops of this island chain at the edge of the Celtic Sea. 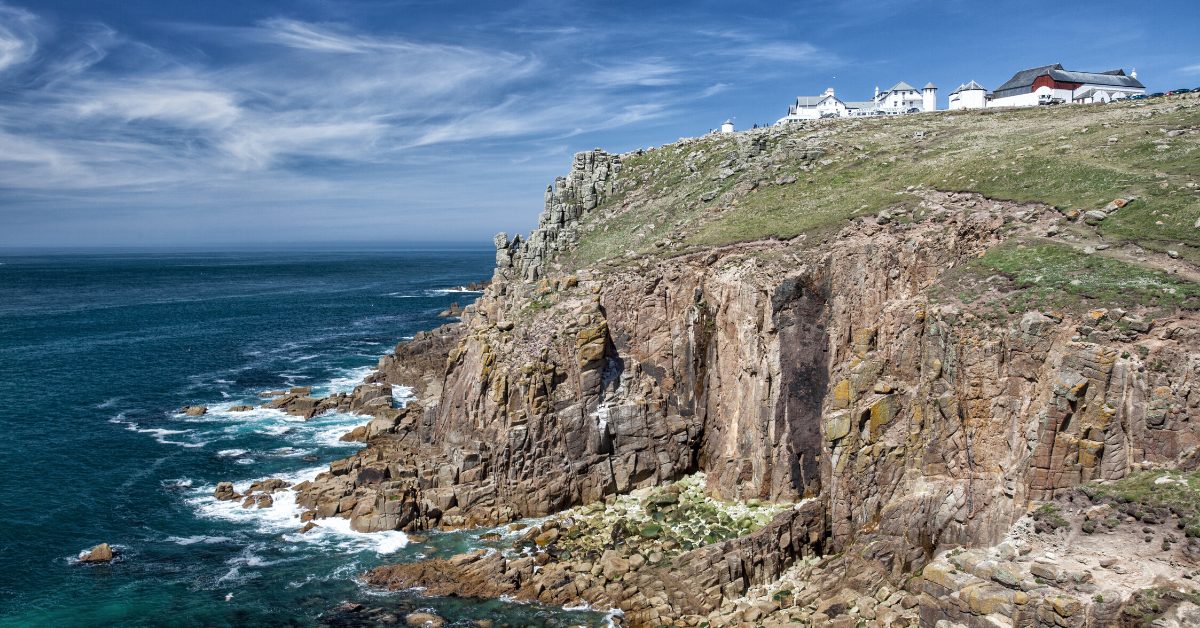 The Scilly Islands or Scillies (pronounced “sillies”, a source of great mirth for a 12 year old English boy visiting with his family) are almost entirely empty of inhabitants. Just over 2,200 permanent residents live here, half of them on the main island, St. Mary’s, and 140 of the 145 islands & islets have no population whatsoever. These days, yearly visitors to Scilly outnumber residents by a factor of 100 - but because that’s still a relatively small number of tourists, it rarely looks crowded.

At low tide, land bridges reach out to connect a few of the islands to each other, forming enticing but treacherous walkways for the adventurous. It all feels changing, fragile and remote - but as a place occupied by people, it’s almost as old as Stonehenge.

If the legends are true, some time over the last two and a half hours, as we sailed here from the Cornwall coast, we passed over the sunken kingdom of Lyonesse, famous for the site of the final battle between King Arthur and his traitorous nephew, Mordred. Or perhaps these scattered isles are what’s left of it, the rest swallowed by rising oceans and a slumping coastline, leaving something like a jigsaw with most of the pieces missing.

There’s no archaeological evidence for Lyonesse, but huge, ancient cairnfields (collections of stone structures) and chambered underground buildings show thousands of years of occupation, back to a time when the islands were joined together. Then, sometime around AD 400-500, the central plain was flooded, the sea rushed in - and broken, half-lost modern Scilly was born. 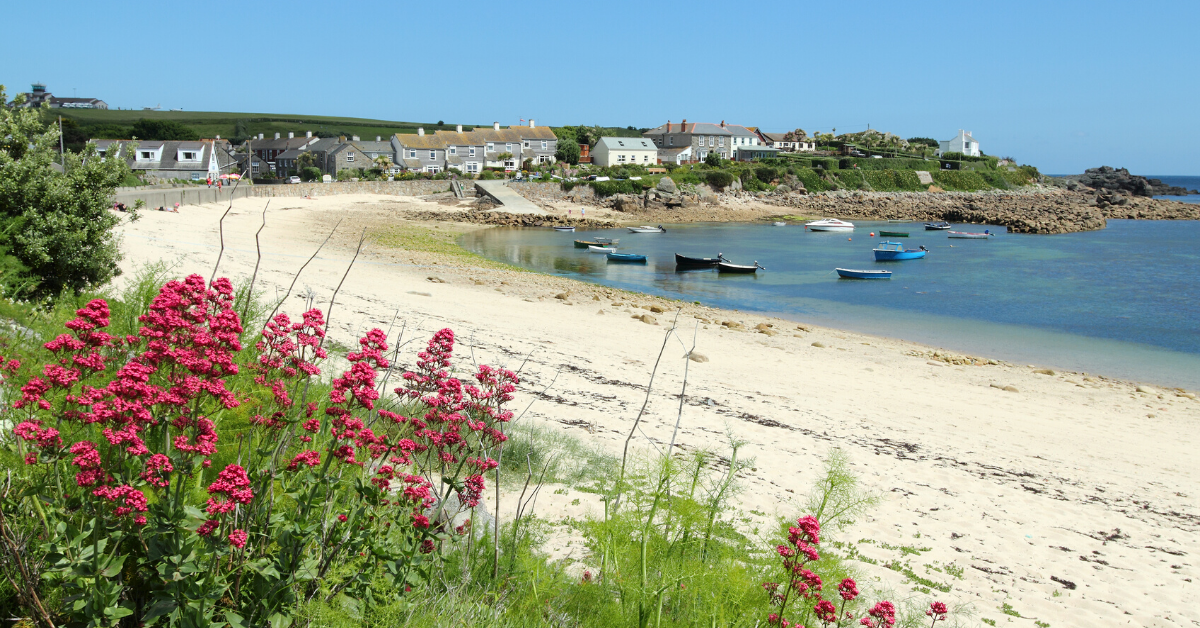 There’s nothing else out here except this land, that sea and endless sky. Cornwall is just over the horizon, France is around a hundred miles to the southeast, and the vast, forbidding expanse of the Atlantic covers everything to the west.

But this remoteness is deceptive. In winter, things can certainly get rough here, as evidenced by the number of historical shipwrecks - but during the summer months, the Gulf Stream brings sunshine and warmth, creating the closest thing to tropical conditions you’ll find in this part of the world.

The palm trees that are making my jaw drop are all on Tresco, the largest island to the northwest. When I visit by boat from St. Mary a few days later, I see why. 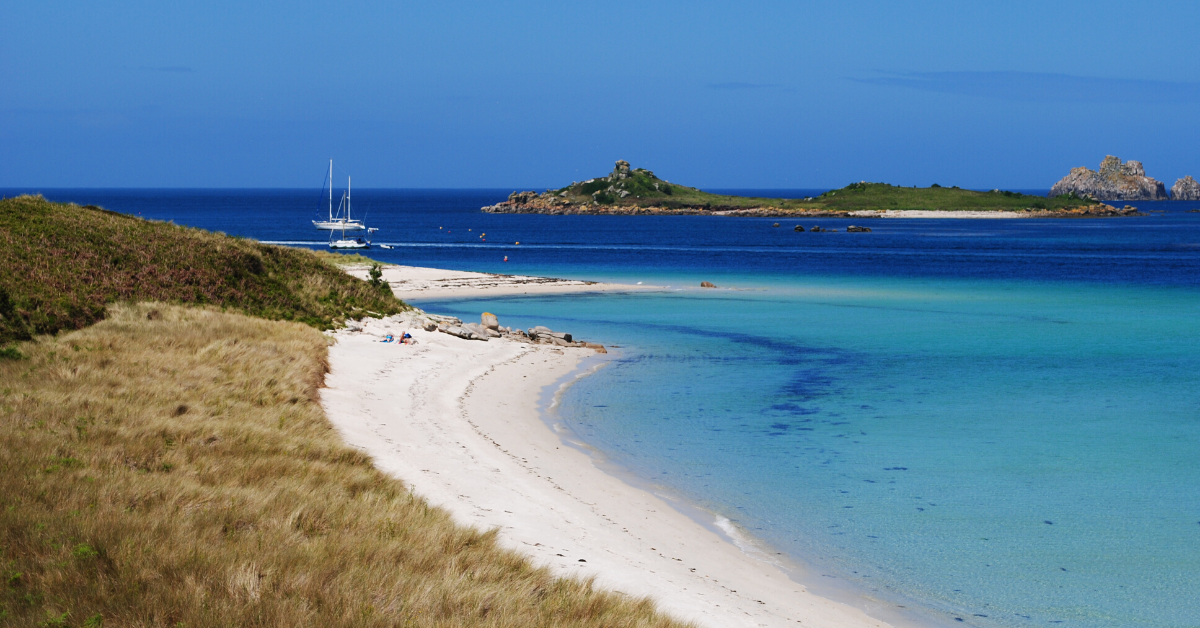 The approaching shoreline is an arresting one. A few yards up the cream-coloured beach it’s England – well-kept hedgerows, chalk-dust paths, all the British cliches. All around, the UK continental shelf is having one last fling with the open air – a scatter of granite, nibbled inwards with half-circles of white beach as if the place was drafted with a pair of compasses. There’s so much sky it gives me a kind of reverse vertigo...
But I’m not looking upwards. I’m looking down.

When can we go swimming, Dad?

The boat carves its way through the glassy green water. The sun’s baking down, laying on my shoulders like a hot towel but when I trail my hand down the side of the boat I can feel the coolness of the air above the water. I flex my fingers, enjoying the play of cold air through them, and then drop them into the sea. It’s like reaching into an icy jewel - the dazzling reflection of the sun scattering into luminous, oily curls of jade and emerald.

I really want to go for a swim. When can I?

We round one of Tresco’s headlands. I can see everything on the sea floor - pebbles, sand rippled like a ploughed field, fish flicking about so fast you blink, again thinking it’s my eyes playing tricks. This is the colour the sea should be when you’re on holiday. This is exactly that colour. But it also stirs my fragments of childhood memories from Cyprus. I can taste a snorkel, smell a rock-pool. I know how delicious that water is.

It turns out that visiting the sub-tropical gardens at Tresco is my Mum’s idea – and we don’t have time to go swimming. She’s more interested in what’s on land - a “perennial Kew Gardens” containing most of Scilly’s 20,000 exotic plant species, brought here from 80 countries including South Africa, Brazil, New Zealand and Burma.

Anyway, it was cold and you’d have got really wet, my mum tells me when we’re back in Yorkshire with the rain coming down hard. Decades later, I know she half-lied - in UK terms, this is some of the warmest water we enjoy, between 8°C and 16°C right through the year. (Not exactly Caribbean as such, but you take what you can get in Northern Europe.)

So it’s with a sense of unfinished business that I leave Scilly with my parents, six days later. These islands may be a small place, small enough to vanish when you zoom outwards on Google Maps to take in all of Cornwall - but in terms of sheer unlikeliness of experience, they’re a landmark of the British Isles.

Go see it to believe it.