The Palladian villas of the Veneto

Simplicity, elegance, and precision define Palladian architecture — as well as the man behind this distinctive and enduring architectural style.

Andrea Palladio was a humble stonecutter who rose from obscurity to become one of the world’s greatest architects. He is renowned for designing the most beautiful buildings in all of Italy, including magnificent palazzos, churches, theatres, and government buildings in Vicenza, Venice, and across the Veneto region.

Palladio is best known, however, for the villas — essentially country estates — he designed for Veneto’s nobility. These 24 villas were inspired by classical architecture, which Palladio had the chance to study up close on a visit to Rome.

From the very first villa he designed in the late 1530s up to the very last, Palladio worked to hone and refine his craft. He incorporated classical principles such as the golden ratio into his designs and took inspiration from others, creating a unique aesthetic that has influenced generations of architects.

Together with 23 buildings in Vicenza designed by Palladio, the villas of the Veneto are a UNESCO World Heritage Site, valued for their enduring influence in the world of architecture. Here are some of the best Palladian villas to visit in the Veneto.

Villa Almerico Capra is regarded as Palladio’s magnum opus. And appropriately enough for a celebrated work of art, the villa more popularly known as La Rotonda sits on a hilltop just outside the city of Vicenza. Unlike Palladio’s other villas, though, La Rotonda was designed as a “suburban” palazzo that showcases a harmonic unity of architecture and landscape. 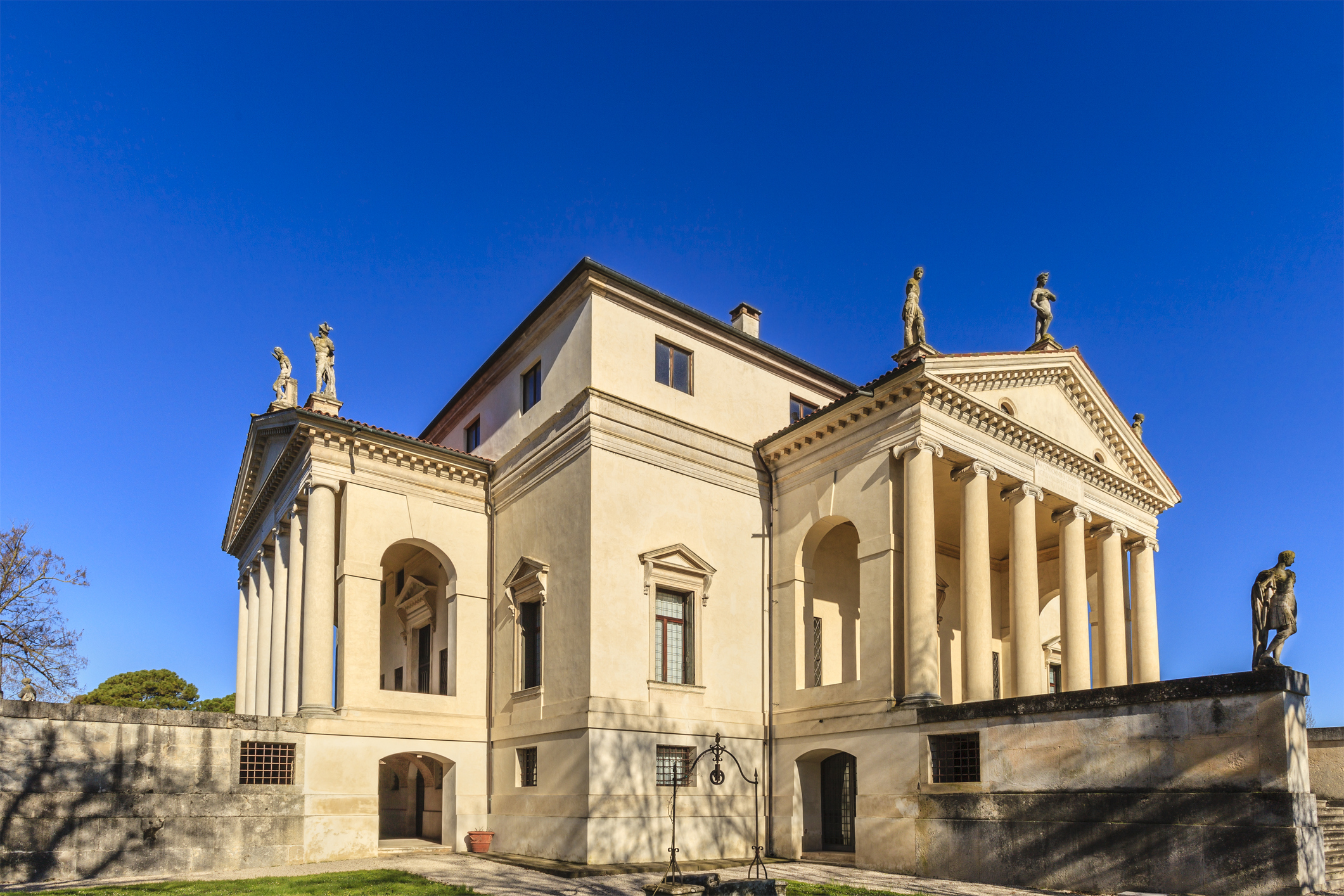 Villa Almerico Capra, also known as La Rotonda, is a villa on the outskirts of Vicenza, dating from the second half of 1500.

La Rotonda was named for its domed central hall decorated to the ceilings with trompe l’oeil frescoes and flanked by elegant rooms and staircases designed with mathematical precision. The villa was laid out in such a way that each room gets plenty of sunlight throughout the day, and each window frames a different landscape.

From each of the four porticos, visitors can admire the manicured lawns and gardens, as well as the rolling farmlands at the foot of the Dolomites.

Situated in the comune of Lugo di Vicenza, Villa Godi Malinverni was one of Palladio’s earliest works, and so lacks some of the defining characteristics of what would come to be known as Palladian architecture. Compared to Palladio’s later designs, the villa is very simple — a long block of a building with a central hall and two perfectly symmetrical wings.

The villa’s lavish interiors make up for the plainness of the structure itself, however. Each room is adorned with frescoes of rural landscapes, as well as scenes from Greek and Roman mythology.

The Hall of the Muses, in particular, draws many visitors because of the highly theatrical nature of its décor. Caryatids are painted on the walls, framing murals depicting muses and poets in Arcadian landscapes and seemingly holding up the elaborately decorated ceiling.

The gardens are equally impressive with its fountains, statues, centuries-old trees, and swans swimming in lazy circles in the lake.

Legend has it that Villa Foscari was dubbed La Malcontenta after one unfortunate Foscari wife. Too spirited for the family she married into, she was locked up in the house as punishment, never to be seen by anyone again.

Whatever its origins of its name, though, Villa Foscari is considered one of Palladio’s finest architectural works. Its classical columns and rusticated exteriors are evocative of ancient Roman temples and public buildings. 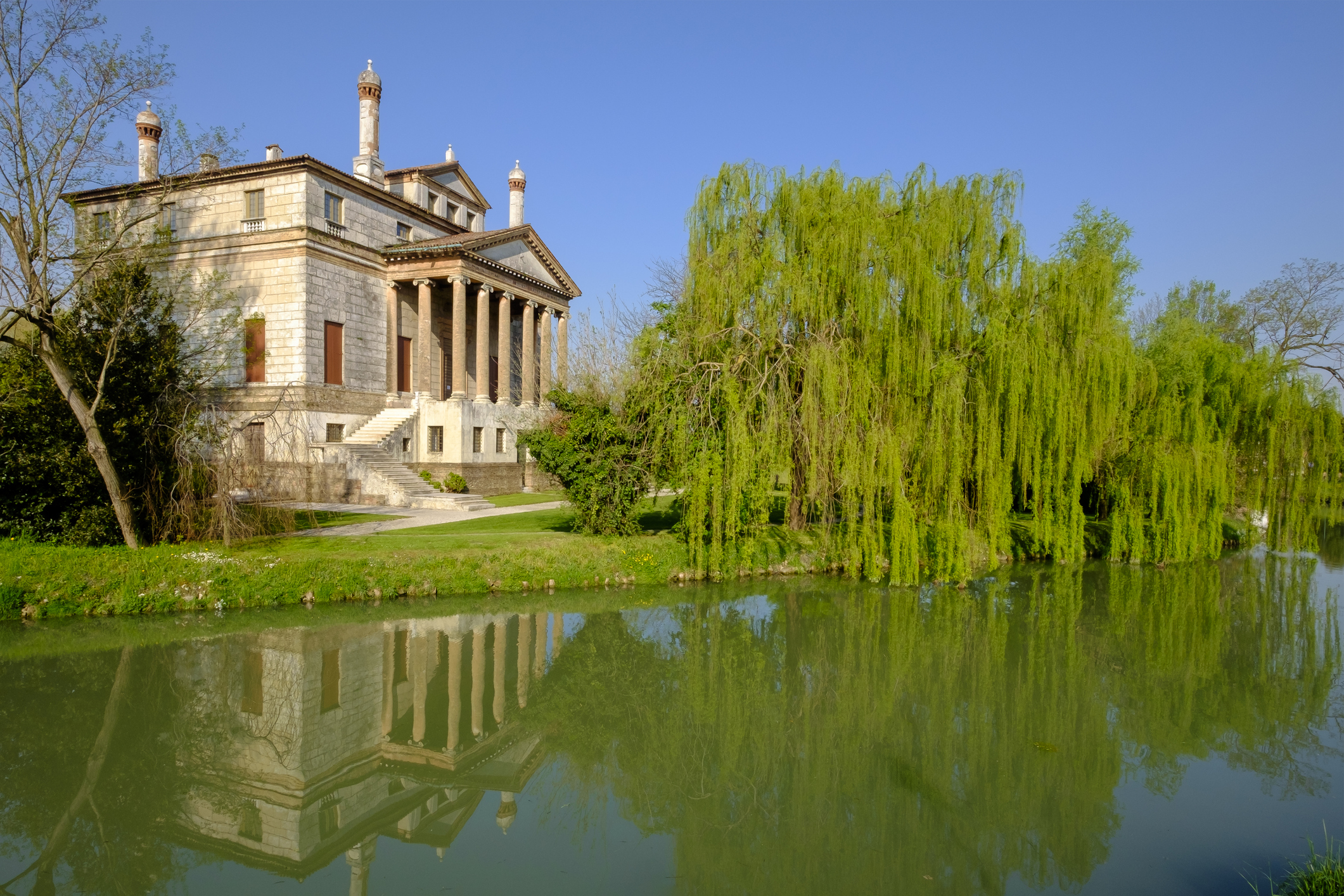 Villa Foscari, also known as La Malcontenta, is a patrician villa designed by the famous Italian architect Andrea Palladio and built in the middle of the sixteenth century on the Brenta canal at Mira, near Venice.

The two-storey main hall was inspired by the public baths of ancient Rome, complete with the three-sectioned arched window characteristic of the baths. Inside, frescoes by Giovanni Battista Zelotti and Battista Franco cover the walls of the sumptuously furnished rooms, where the Foscaris entertained 16th-century Europe’s most illustrious personalities.

Set in a large park in the hamlet of Fanzolo di Vedelago in Treviso, Villa Emo is one of Palladio’s later villas. As such, it is a perfect example of the Palladian villa, the culmination of years of sharpening his skill.

The villa comprises a slightly elevated central hall, which houses the living quarters, and two symmetrical colonnaded barchesse. In laying out the buildings, Palladio followed the customs of the local farming folk: The barchesse face south so they get enough sunlight to keep moisture from the food stores. And, instead of stairs, the villa has a ramp leading up to it, doubling as a threshing floor on which grains were left out to dry.

Except for the pediment over the loggia, the villa’s exterior is devoid of adornment. Inside, however, are rooms upon rooms decorated with frescoes depicting Treviso’s rich agricultural history interspersed with images of Roman gods and goddesses. Many of the frescoes include depictions of flowers, fruits, and maize, which was allegedly introduced to Northern Italy by the villa’s original owners, the Emo family.

Also known as Villa Barbaro, Villa di Maser was where Palladio spent his last days, luxuriating in the comfort and grandeur of one of his final works. A flight of marble steps leads up to the villa’s yellow brick and stucco main building, whose facade resembles a Roman temple with its Ionic columns surmounted by a large pediment. The pediment bears the arms and heraldic symbols of the Barbaro family, which established and ran a winery on the property in the mid-16th century.

Today, visitors can take wine-tasting tours at Villa di Maser, sampling fine whites and reds made from grapes grown following time-honoured traditions. Guests can also walk around the villa’s extensive grounds, stopping by the elaborate nymphaeum, a grotto-like ornamental structure, that frames a natural spring in the back gardens.

There’s also the church and carriage museum to explore, as well as the villa itself, which features fine frescoes by Paolo Veronese.

In the comune of Piombino Dese in Padua stands Villa Cornaro. Its design follows the Palladian principles of simplicity and symmetry, but its projecting double loggias deviate from Palladio’s other villas.

Palladio decided to give this villa two loggias, one on top of the other, to solve the problem of limited space. Situated in a suburban area, the villa would have been cramped without the loggias, which serve as additional living spaces.

Palladio’s use of two loggias would later influence the design of homes across the globe, including Drayton Hall in Charleston, South Carolina. Thomas Jefferson’s initial design for Monticello, his Charlottesville, Virginia plantation, was modelled after Villa Cornaro. Eventually, Jefferson settled on another design that was still in keeping with the neoclassical principles developed and refined by Palladio.

The simplicity and austerity of Villa Pojana’s facade reflect the military background of its original owner. In 1546, the knight Bonifacio Poiana commissioned Palladio to build a retirement home in the comune of Poiana Maggiore.

Palladio immediately set out designing a monumental — if spartan — riverfront mansion, replete of embellishment, save for a serliana (rounded archway) with five oculi. The three life-size statues on the red-tiled roof were added later by Girolamo Albanese, a Vicentine architect hired to make renovations in the late 1650s.

Inside is the barrel-vaulted central hall adorned with intricate artworks by prominent local artists. One of these is a bust of Poiana, gazing sternly upon visitors from the stone lintel over the heavy wooden doors. The room to the right of the hall has frescoes depicting various Roman emperors, while smaller rooms on the main floor are decorated with landscapes and grotesques (ancient Roman-style frescoes).

One of the richest noble families of the Venetian Republic, the Pisanis owned many palatial properties across the Veneto region. In fact, there are several Villas Pisani in the region, two of which were designed by Palladio. One of these is Villa Pisani Bonetti in the hamlet of Bagnolo.

This villa is unique in that it was the first designed by Palladio for an aristocratic Venetian family. Like other Palladian villas, however, it served as the family country home, a rustic farmhouse in a bucolic setting. 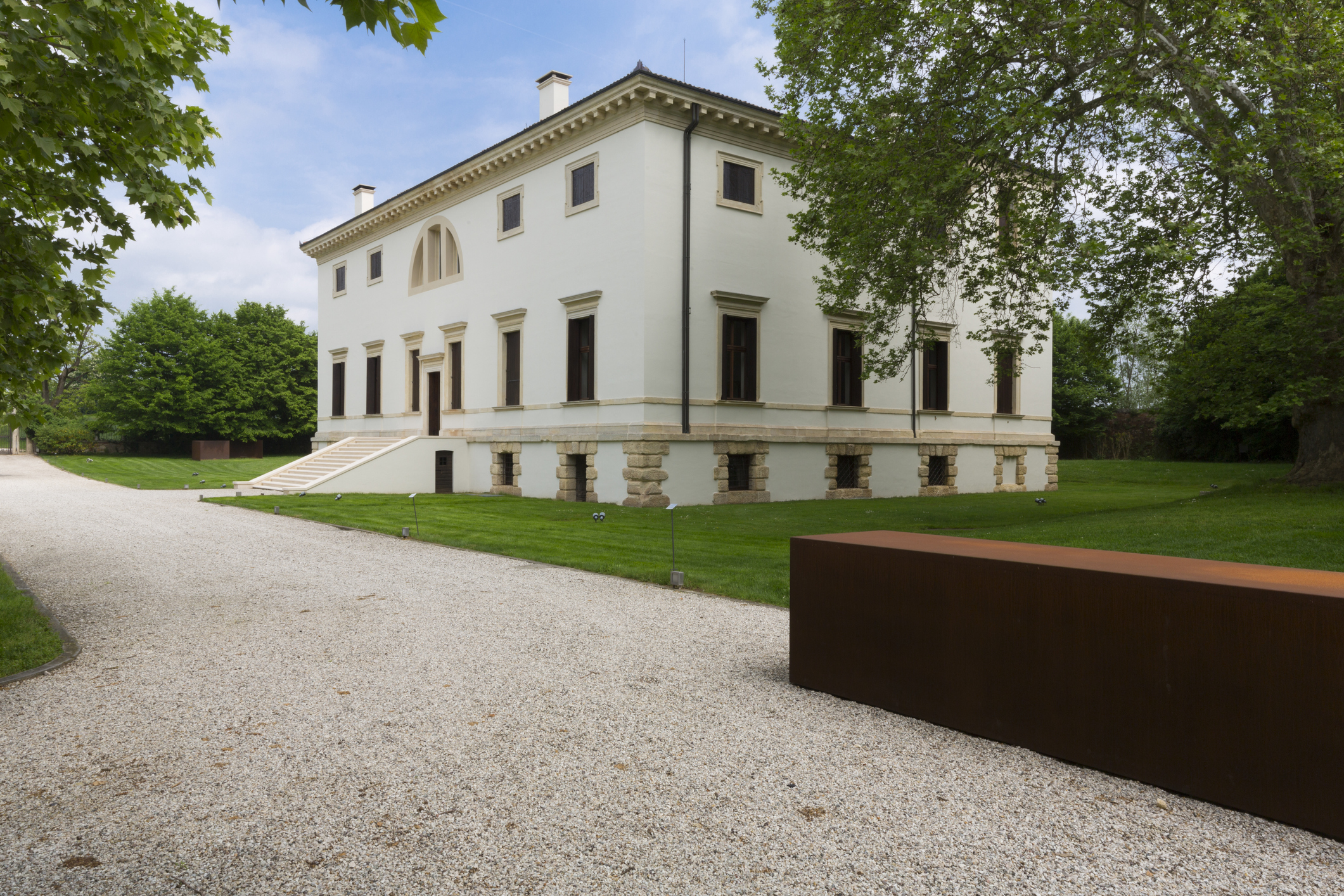 The Villa Pisani Bonetti is a patrician villa designed by Andrea Palladio, located in Bagnolo, a hamlet in the comune of Lonigo in the Veneto region of Italy.

Today, visitors can spend the night at the barchessa, a porticoed building within the villa grounds. Originally designed as a farm outbuilding, serving as a storeroom as well as the kitchens, the Barchessa at Villa Pisani is now a 15-room hotel with a gourmet restaurant and event halls.

Each room was carefully refurbished to preserve the original structure and is equipped with modern amenities. Guests can enjoy a relaxing afternoon by the pool, or take a tour of the surrounding farms and wineries, many of them owned and run by the same families for generations.

We'll get back to Italy eventually - join our weekly newsletter list to find out when we can! Join our community today.