Earth, Wind And So Much Fire: Finding Bliss In The Aeolian Islands

Seen from afar, it’s difficult to miss these isles.

Maybe you’re used to seeing distant island chains slowly rising into view as you approach from dozens of miles away, turning from distant shadows - something seen at the corner of your eye - into distinct landmasses with colour and detail. 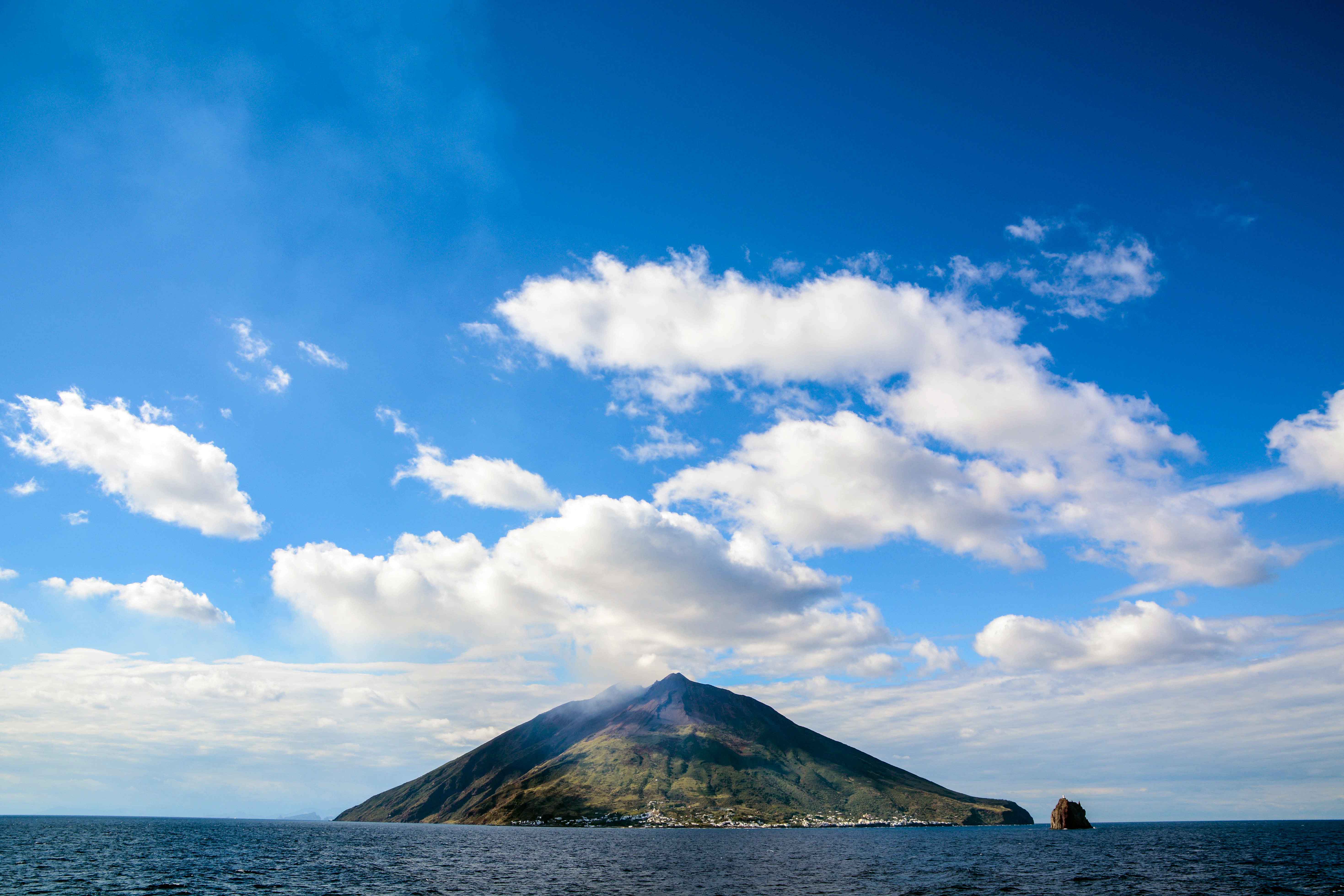 Stromboli on a sunny day

With Italy’s Amalfi coast half a day behind you and Sicily and Malta far ahead, your first sight of the Aeolian Islands is Stromboli, a near-perfect volcanic cone, so high and symmetrical it’s like a child’s perfect drawing of a mountain (the name is from the Greek word for “round”), with that distinct sliced-off top that tells you this is a mountain prone to blowing its top.

(The last time was in 2007, which is why visitors are currently barred from climbing the 900-odd metres to its summit.)

There’ll probably be steam rising from Stromboli as your ship passes, and from the volcano’s flanks, where small lava flows have been slowly carving paths down to the sea for decades. It’s an awesome, rather menacing sight - so it’s startling to get close enough to see the houses and streets webbed over the lower slopes of its northeastern side. Wait - this is an active volcano, and there are people living here?

Yes indeed - for thousands of years, in fact. Rather less people since the 1950s when the volcano started becoming active again, it’s true, but for many centuries, the people of the Aeolian islands have been used to living on land that occasionally shifts under their feet.

A more fruitful question is why are there people here? Why would you live on the side of such a forbiddingly steep-sided island, let alone one with a history of blowing up? 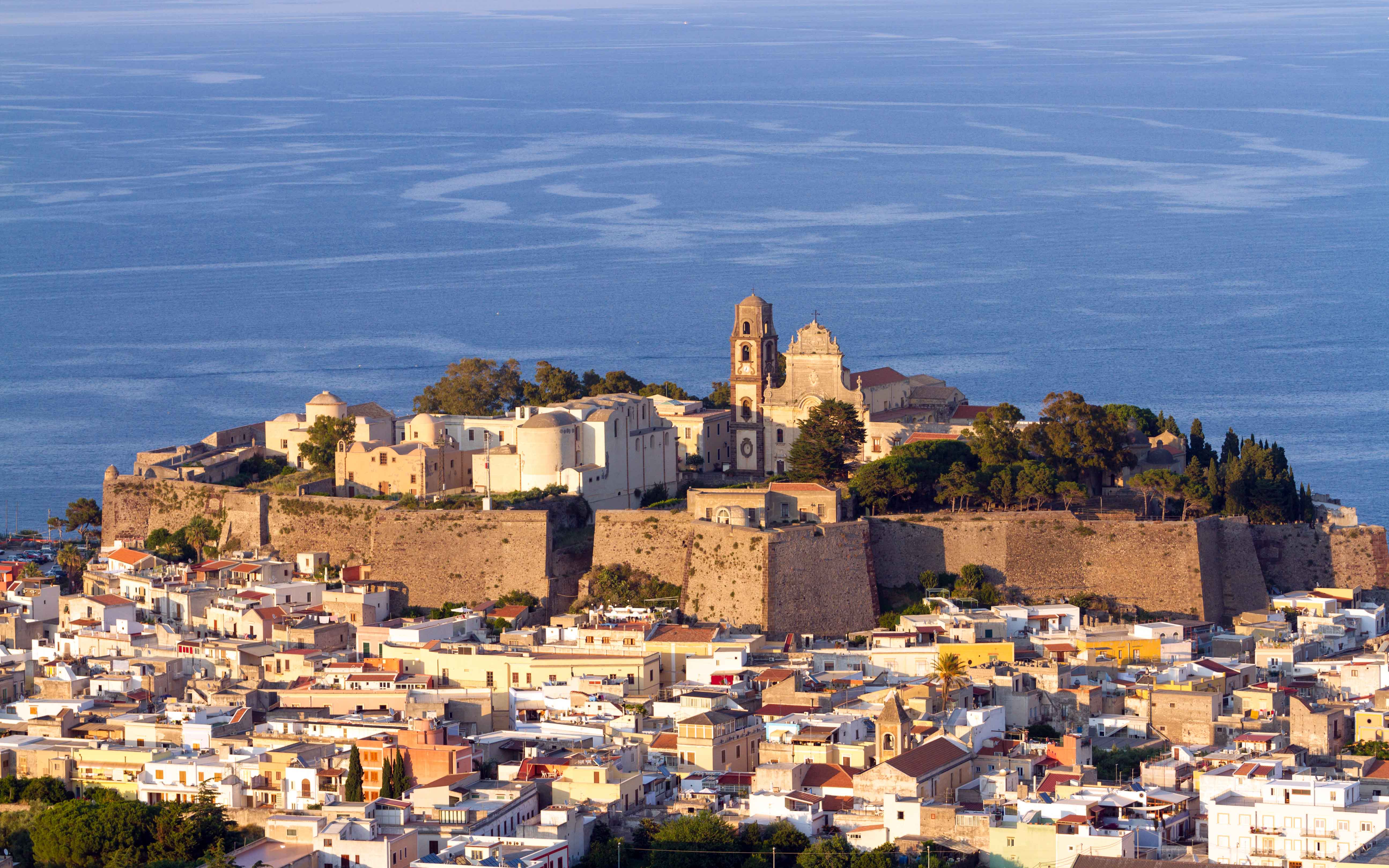 Lipari, the largest of the Aeolian Islands

One answer is easy to come by, because you’re sailing through it. This is the Mediterranean at its most welcoming, with summers of azure seas, cloudless blue skies and blazing sunshine. On a fine day, it’s incredibly beautiful here - and this part of the world sees many fine, fine days.

Across these seven inhabited islands and the broken, ragged scatter of islets around it that are too steep to clamber onto, there’s a year-round population of around 15,000 people: about what you’d expect, if a little high, for the habitable land you’ll see as you sail through this archipelago.

But in summer, nearly a quarter of a million people will come here, many of them in expensive yachts - the rich, the powerful and the famous, taking a break in one of Europe’s hottest tropical getaways.

If it’s night when you pass the next island, Panarea, a few dozen kilometres southwest of Stromboli, you’ll see a twinkle of lights on and off the shore that mark a lot of good parties in progress. This is the softest and most instantly attractive of the islands, with glassy coves, easy strolls and nightclubs galore. By day, you’d see how sparsely inhabited Panarea is - but right now, the lights suggest a place celebrating hard, a glittering display of wealth at work.

A short sail to the southwest, the chain’s rugged nature reasserts itself. Of the three islands stretched out in a row, Lipari is almost everyone’s port of call, as it is yours for the day on this tour. Around 12,000 people live here, 85% of the entire Aeolian population, and accordingly it’s the island best prepared for visitors. 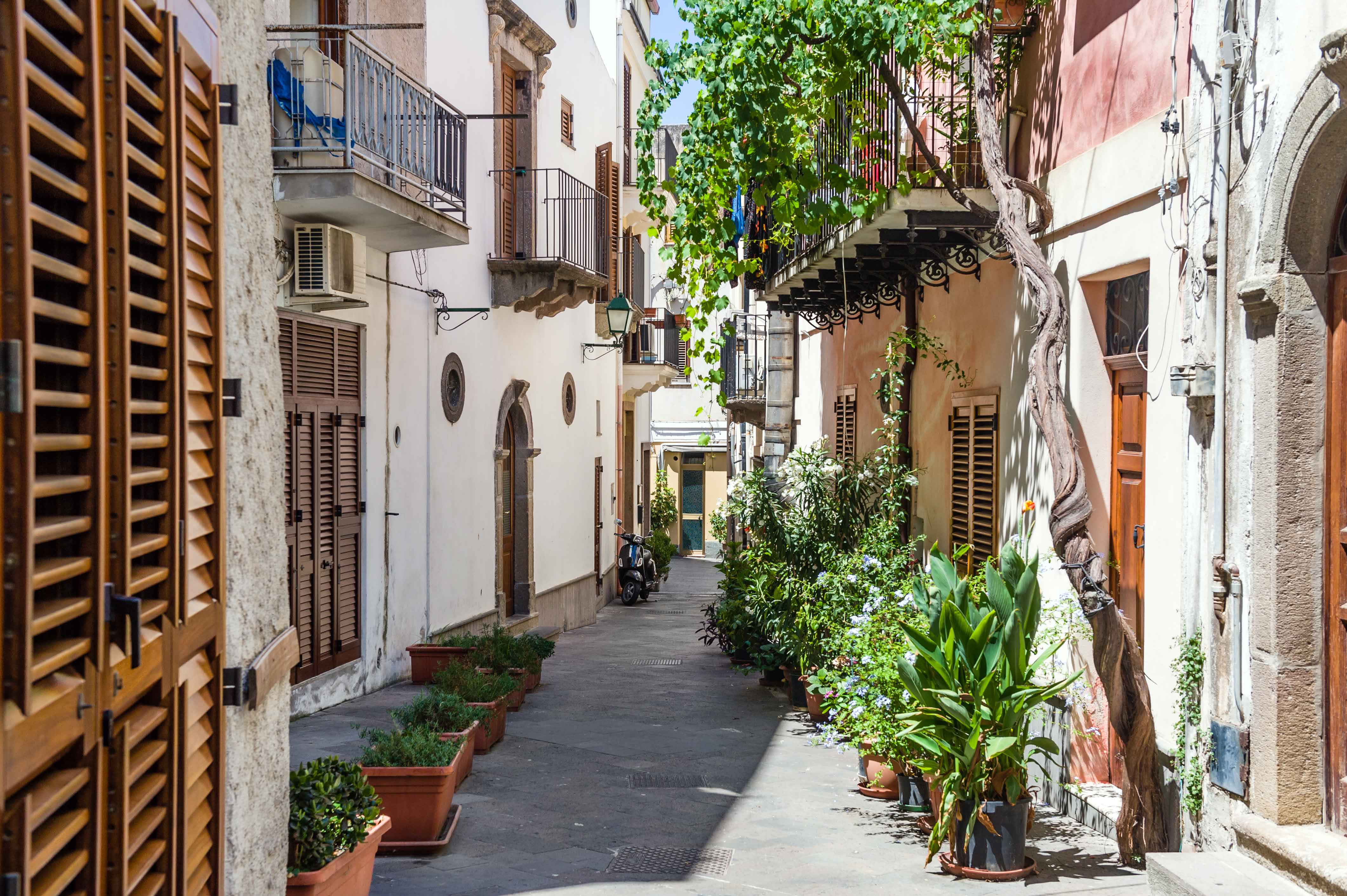 Quiet streets in the Old Town of Lipari

To its north and south, the islands of Salina and the aptly-named Vulcano are made of steep cones of grey-black rock - and behind them far to the west, Filicudi and Alicudi complete the liveable portion of the archipelago.

Far below here, under the sea and the Tyrrhenian Basin that forms its floor, Africa is colliding with Europe. More specifically, it’s diving underneath it - the edge of the colossal African tectonic plate pushing against Europe’s, squeezed until it’s deflected downwards with unimaginable force into the depths of the Earth’s mantle. Eventually it reaches a depth and pressure that turns the rock liquid, forming magma. The magma rises, the land above it cracks and bubbles - and lava explodes through it.

Hundreds of thousands of years ago, these islands would have been seamounts, undersea volcanoes - but one by one, starting with Filicudi around 260,000 years ago, they pushed to the surface. Volcanic islands are more common than you’d think (they make up around 8% of our planet’s land surface )but rarely are they as intimidatingly vertiginous as these.

The Aeolian Islands (from the Greek god Aeolus, master of the winds) may look hostile - but volcanic rock weathers into highly fertile soil, making the island lowlands a terrific place for growing crops. Many houses are built from a seemingly inexhaustible supply of cooled blocks of lava, and for the best part of a millenia, Lipari was the Mediterranean’s number one source for pumice, only found where exploding lava is “frothy” enough with gas and water to leave it swiss-cheesed with cavities as it cools.

Here, then, is the second good reason to settle here, and for thousands of years, people - and surprising varieties of plants and animals - have done exactly that.

19th-century explorer Archduke Ludwig Salvator of Austria was so impressed with everything here that he spent half a decade writing an epic 8-volume study of the island chain, depicting it with a mixture of a conservationist’s attention to natural detail, and a travel writer’s love of the quirky and anecdotal. His accompanying illustrations are still used as artwork in local hotels. 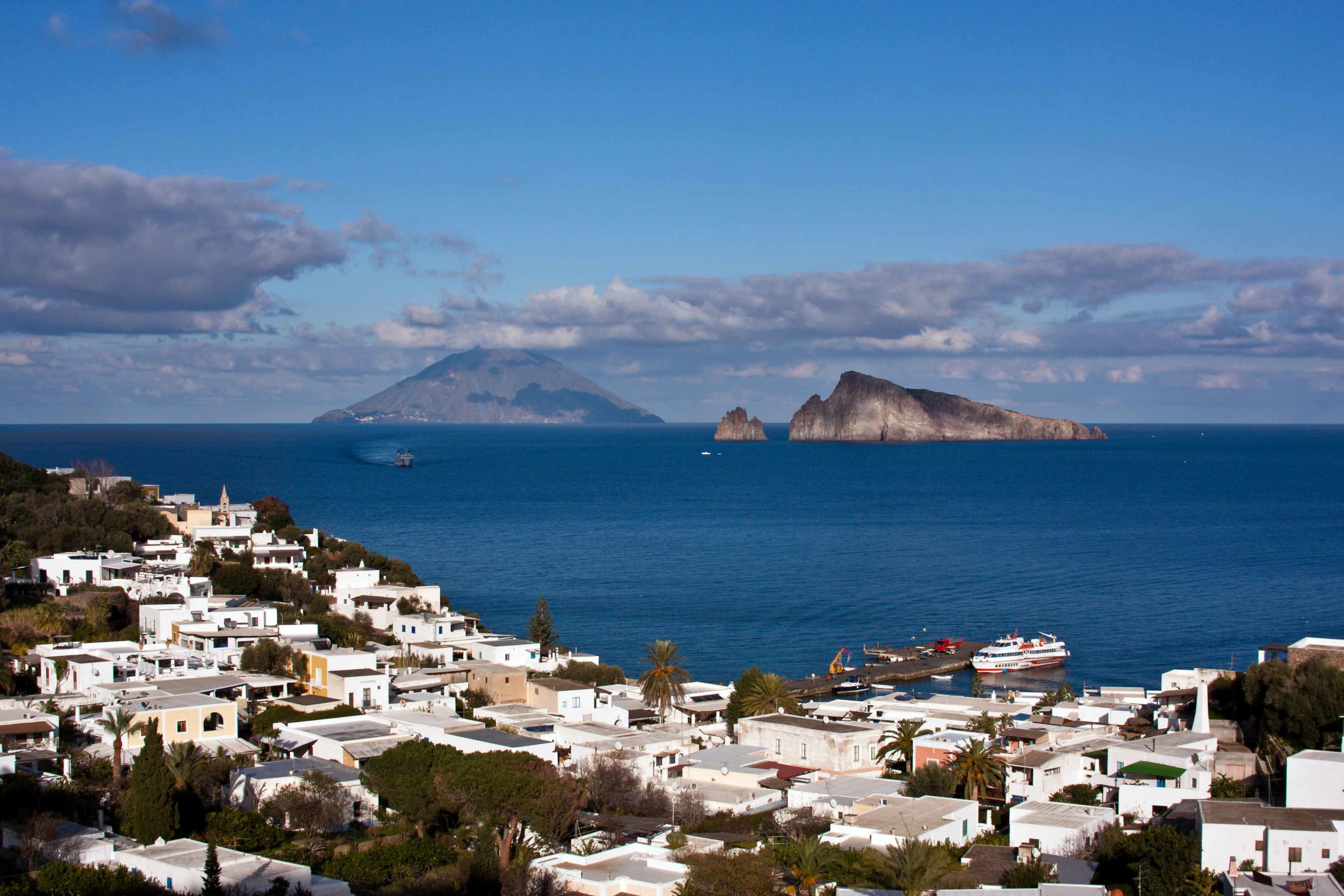 This is a place to linger, to soak it all in, and maybe to escape for a while. There are island interiors to explore, archaeological remains to marvel at, things to eat and drink that you won’t find either in nearby Sicily or Malta.

But it’s also worth treasuring this, the view from offshore, floating between the tops of volcanoes in a placid, luxurious setting born of ancient upheavals that put human accomplishments to absolute shame.

It’s nice to feel that - privileged, but also humbled by a place created at an inhuman depth of geology and time - before you follow the winds onwards, and see what else this modern, surface world has in store for you.

Join Wheel & Anchor fro a unique small-ship cruise program exploring Sicily, Malta, and the Aeolian Islands in the spring of 2021! Get all the information here.