When Sleepless In Naxos, Drink Your Kitron With Lots Of Water

The ship nudges into dock, the metal gangway is stretched out onto shore - and Naxos awaits.

It’s the most spectacular welcome I’ve had from a Greek island. The sea is an improbable shade of blue that speaks of overzealous fiddling with the settings on Photoshop - but no, it really can look like this, and right now, it is.

The sun’s so bright and the buildings of Chora (aka. Naxos Town) are so white that you get a kind of snow-blindness if you’re not wearing sunglasses. The morning air smells of salt and seaweed, and miles and miles of sizzling-hot rocky hillside. All your senses tell you it’s going to be a really fantastic day. 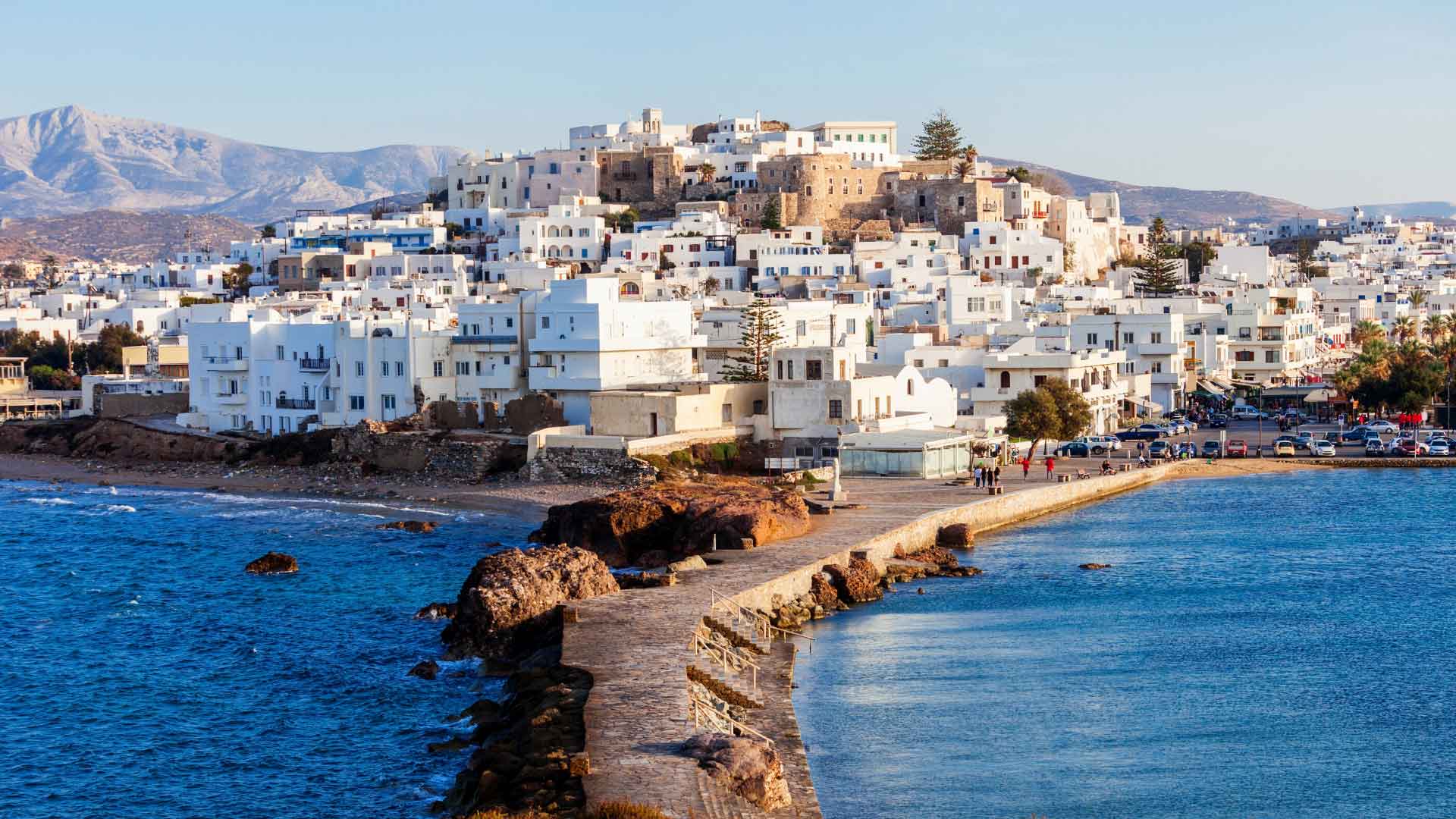 The island of Naxos, Greece

I don’t care about any of this. I just want to sleep.

Last night in Athens, I made an adventurous decision. My 6-week journey around Greece and its island chains was 90% arranged in advance: every hotel booked, every bus or ferry meticulously detailed in my notebook, so I always knew where I was staying and where I was going. But the other 10%, I decided to make it up as I went. A day here, a day there, never more than a day at a time, but an entirely blank calendar.

In Athens, with no hotel booked for the night before my morning ferry-ride to Naxos, I decided I’d try a Greek tradition I first read about in Sofka Zinovieff’s gorgeous Athenian travelogue, Eurydice Street: A Place In Athens, written five years previously in 2001.

As the sun went down, I would head to the city centre and start un-nighting - the faintly macho tradition of staying up all night, moving from bar to bar, alternating between drinking coffee and drinking beer until you were in a pleasantly hypercaffeinated fog of tipsy goodwill towards everyone you met.

As it got later and later, I was delighted to find the bars were staying open, so I went from coffee to raki and back to coffee, threading my way through the Plaka district under the Acropolis, talking to people, marvelling at how friendly everyone is (helped along by the alcohol I’d drunk), and trying to keep my eyes open until dawn. 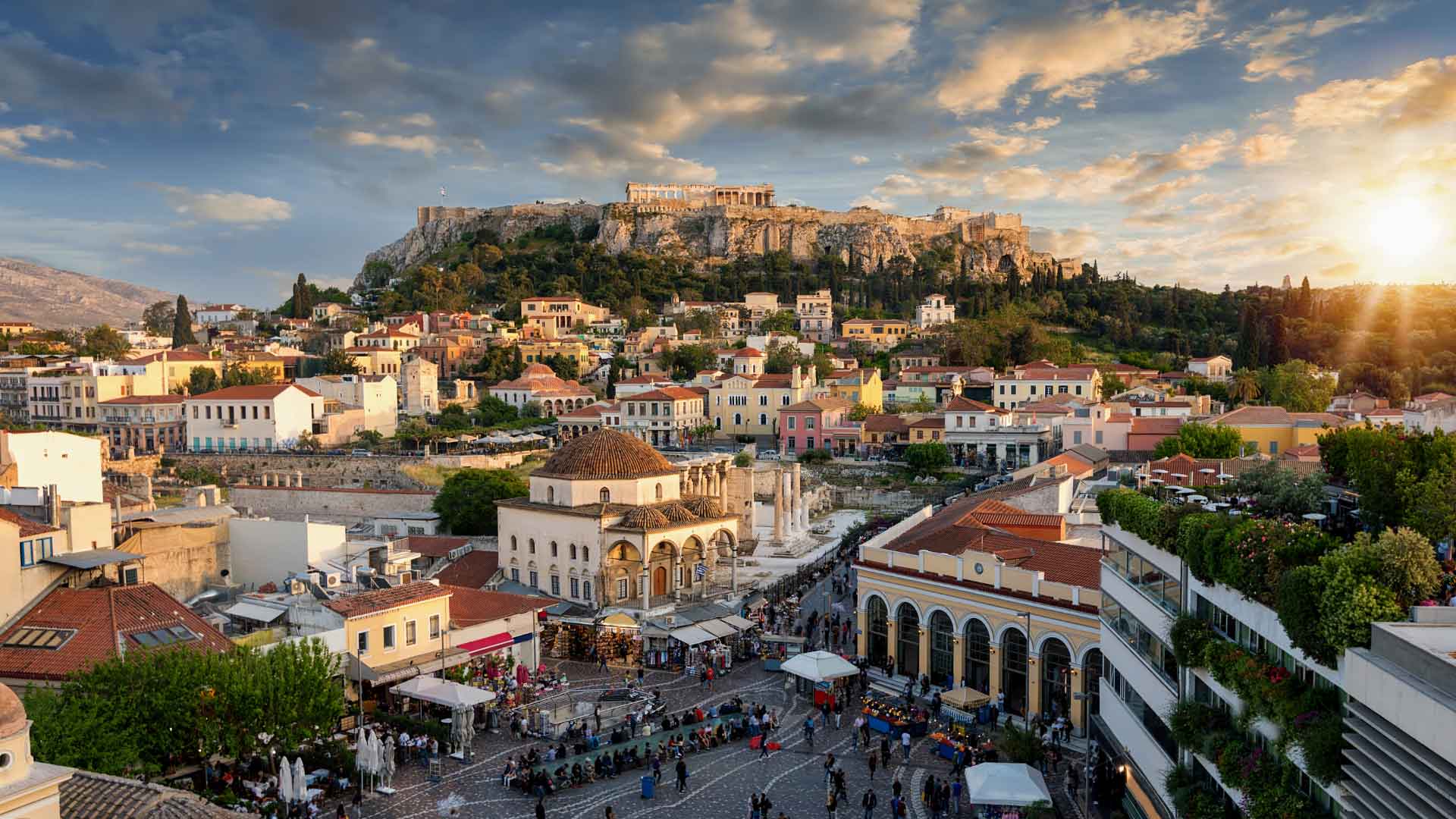 Sunset over the Plaka district in Athens, Greece

Now I was paying for it. My gregarious spirit gone, I napped on deck for most of the 4-hour ferry ride, and woke cranky and gritty-eyed. Ghagh. Travel.

In other circumstances, I’d have been a perfect target for the accomodation touts on the dock, holding makeshift signs that promised hotel rooms for BEST PRICE OF NAXOS and YOU WON’T GET PRICE BETTER WITH OTHERS, none of them accompanied by room rentals offers that were terribly cheap.

But I’d read my guide book (always follow a guide’s advice!) and I knew what to do. I marched across the town square to the Tourist Information Office, and asked them if they knew of a good place to stay.

Half an hour later, I was being shown into my room for the next five days - a private rental, beautifully clean and furnished, a big window with a stunning view of the town, and a price that was a third of what the touts had been yelling at me.

And there, waiting for me on the balcony table, was a strong, hot cup of coffee, and a tall glass of something green. The coffee didn’t even touch the sides of my throat - and as I sipped the powerful green liquid (hoping it wasn’t for washing the dishes), my mouth filled with an exquisite, sweet tang of lemons.

It was all so perfect, and afterwards I sat there, my lower lip wobbling.

Then I blinked furiously, wiped my eyes, blew my nose, went to bed and slept for 14 hours.

In fact, I’d got it wrong. The liquid wasn’t made of lemons. Close, the same family, but I’d mistaken the grandfather for his offspring. This was my first taste of one of the most ancient of citrus fruits, one of the few that our modern, popular varieties are descended from - and I was in one of the few places in the Western world where it was still cultivated in force. 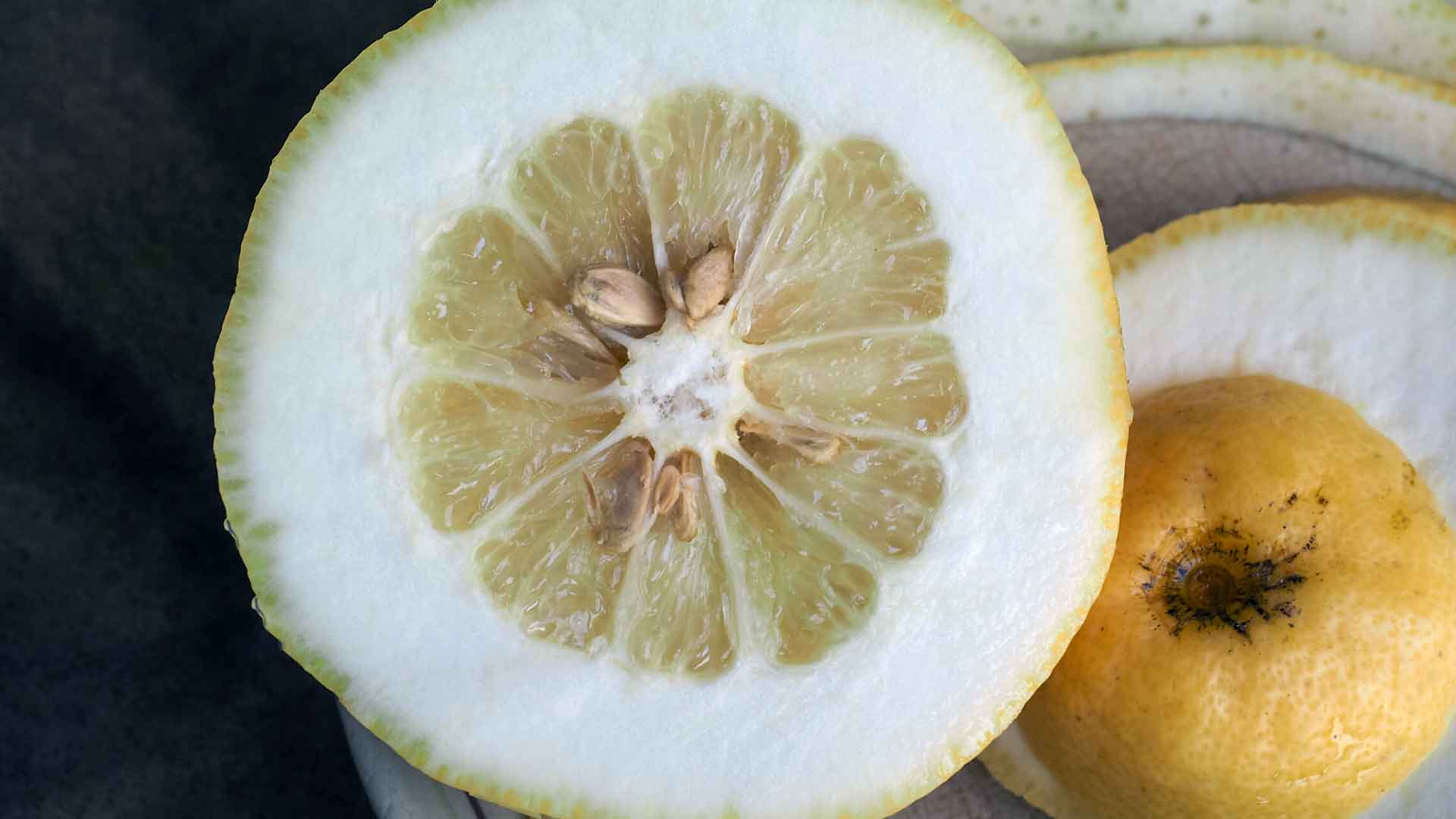 A citron fruit from Naxos, Greece

The first time you see a citron fruit, you might think it’s a stunted corn-on-the-cob, or a lemon suffering from some bubbling, mutating disease. It’s squat and lumpy - and if you slice it in half, you find the rind goes most of the way towards the middle, leaving just a tiny circle of translucent flesh in the centre. Squeeze one of these halves, and very, very little juice will drip out, if any. As citrus fruits go, it looks rather poor value.

If you tried to use a citron like a lemon or lime, you’d be disappointed - but that’s not what you do here. Go back thousands of years to its origins in India, and you wouldn’t find anyone squeezing it over their food or making lemonade. The ways of the citron are subtler and more surprising.

Take that green liquid I was drinking. It was made from citron (hence its name, kitron), but it was made from the leaves of the plant, not the fruit. It’s also the sweetest and least alcoholic of the three types of kitron made on Naxos - the others are clear and yellow, in rising order of bitterness and strength.

Making kitron takes more than a little hard work. The harvesting season for citron leaves is between October and February, a time when Greece is cold, rainy and occasionally lashed with spectacular Mediterranean storms. If gusting wind and numb fingers weren’t bad enough, leaf-pickers also have to contend with the plant’s sharp thorns (the last thing you want to encounter in a gale).

Once picked, the leaves are left to dry inside, then the best are put into copper stills along with stems and a little of the peel, and water and sugar are added. One roaring olive wood fire later, a distillate is formed - and back it goes into the still, and the whole process is repeated, until the required strength is attained. Then a little more sugar and water, a natural colourant, and it’s decanted into a bottle, ready for sale. 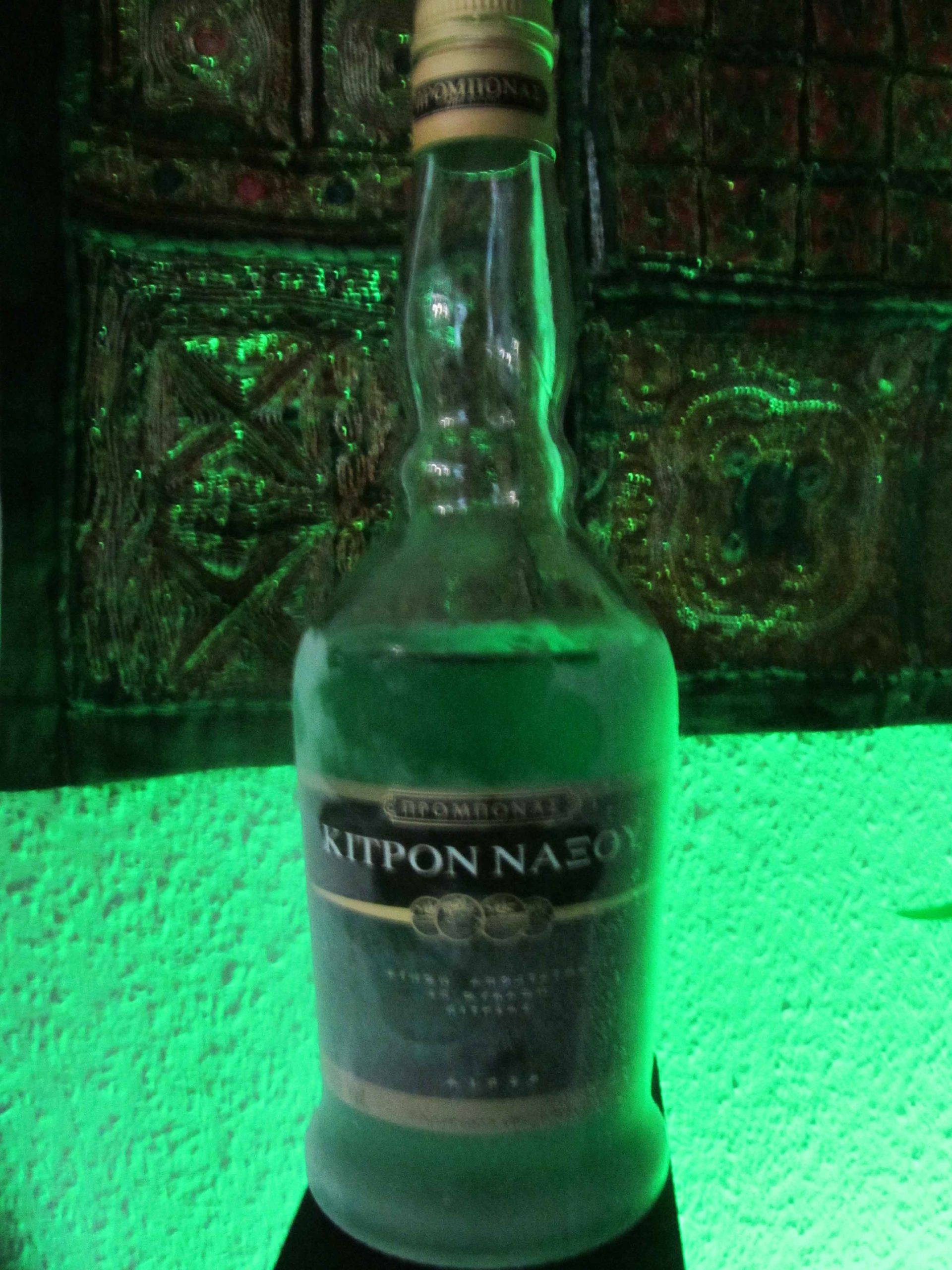 A bottle of Kitron liquor from Naxos, Greece

Every Greek island seems to have some local tipple you won’t find anywhere else (for example, Corfu is famous for its island-shaped bottles of kumquat licquer) and Naxos has cornered the market on kitron. A century ago, huge swathes of the island were covered in citron trees - but in the 1960s, many were uprooted and replaced with more profitable crops. Today there are around 2,000 trees left, and most are owned by the island’s two rival kitron-making families, Promponas and Vallindras.

But outside of Naxos, that’s basically it for Greece, barring a few wild citron trees on Corfu. Greece - but really, Naxos - holds the PDO (Protection Destination of Origin) for kitron, so if you’re drinking it, it was made here, along with almost everything else that the island needs.

(One thing you won’t find a lot of on Naxos is fish, since it lacks good ports - but inland, the island produces all its own food, including the walnuts that go into its kitron-soaked cake, Melachrino.)

The other thing you should know about kitron, which I discovered the next morning, is that it’s strong (30% to 36% proof) and you should supplement it with a few glasses of water, especially if you’re already mildly hung over, sleep-deprived and exhausted. The drink is delightful; the pounding headache, considerably less so.

Yet in a way, it completed my un-nighting experience, because you’re supposed to feel terrible for days afterwards.

Mission accomplished - but I’ll be doing things differently next time, thanks.