Finding The Meaning Of Life In The Rice Fields Of Bali

It’s one of the most famous and widely-photographed sights of Bali: ranks of rice terraces fringed with coconut palms, climbing in soft green waves up the side of mountains - like scattered fragments of a vast amphitheatre being reclaimed by Nature.

If you’re visiting Bali, save lots of memory on your phone or camera for capturing these scenes, because everywhere you look, it’ll be gorgeous. But they’re not just for show. And they’re not just about farming rice, either.

As you snap picture after picture with your lower jaw agape, remember what you’re actually looking at. This is beyond agriculture. This is an enduring philosophical worldview in action. 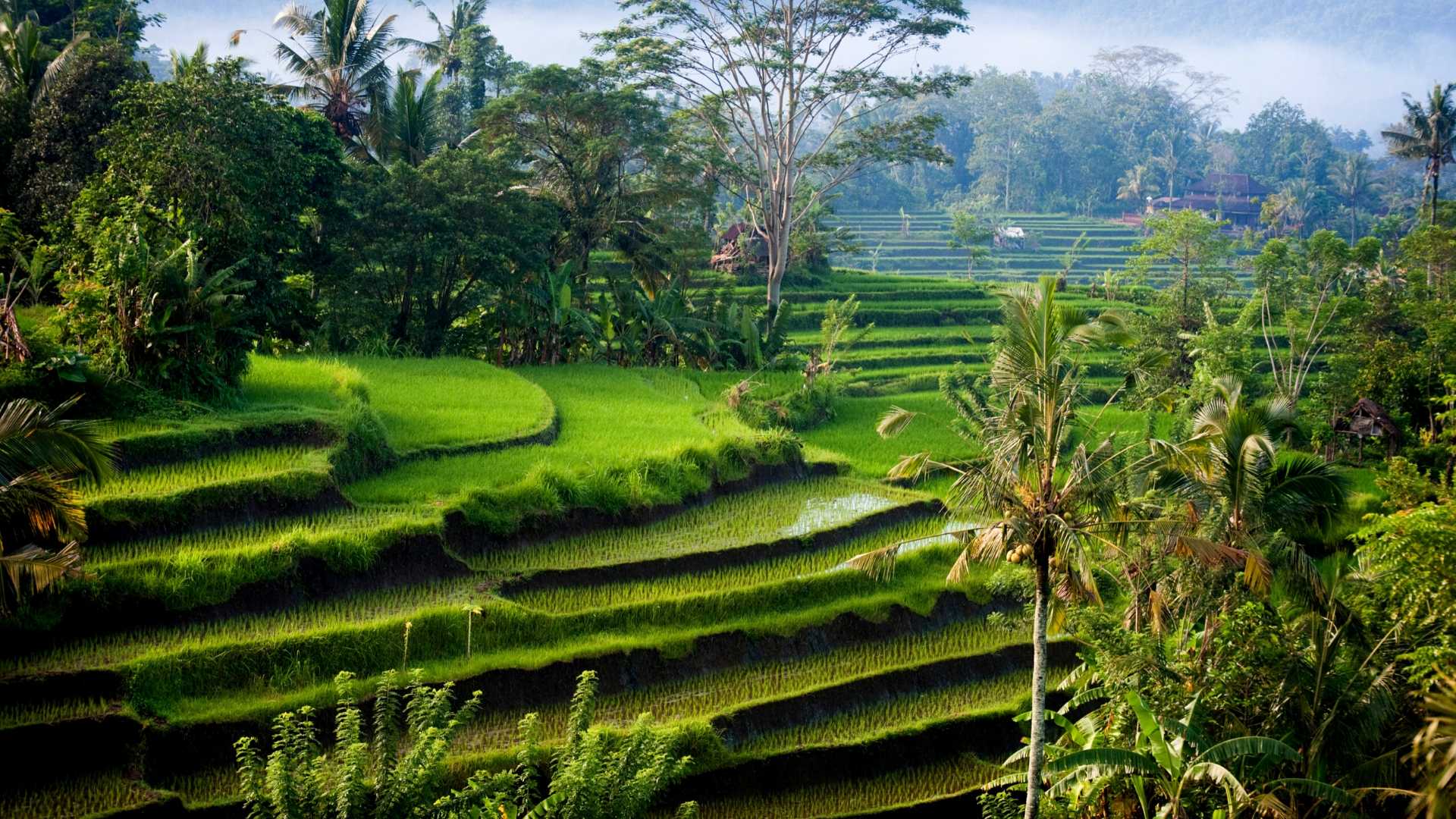 Yes, that sounds like an overenthusiastic marketing tagline. But in this case, it’s factually accurate.

Rice is the biggest of deals in Indonesia. It’s the staple food that accompanies almost every meal, and gives the average Indonesian around half of their calorie intake. Every year, the country’s 17,000 islands grow more than 500 million tons of the stuff, employing over 100 million people (over a third of the population) along the way.

People eat it, people worship it (by dedicating the first Friday in every month to celebrating Ida Bhatari Sri, the Goddess of Rice) and while tourism now brings in more revenue, rice production remains the major employer in the country’s economy.

It’d be easy to assume all this is because the islands are perfect for rice-growing. In practice, it’s rarely that simple. Rice production needs flat terrain and lots of water, and the two don’t always naturally go together. In Bali’s case, the mountains are where the most plentiful freshwater supplies are - yet they’re where the steepest land is.

The solution is called subak, a complex water management system for paddy fields, combined with these vast terraced fields carved out of the mountainside. It’s an engineering marvel that has so much to teach the rest of the world about sustainable food production and landscape management.

The key term here is “sustainable” - because it’s a system that has been working for a thousand years.

It’s hard to truly get your head around a statement like that. At a time when the Holy Roman Empire ruled central Europe, when the first European explorers were setting foot in the Americas (at L'Anse aux Meadows, Newfoundland) and when the entire population of the world was just 300 million people, the people of Bali were successfully using more or less the same methods of cultivating rice as they do now - in a way that could be kept up, year after year, for at least another ten centuries. It’s a staggering achievement. 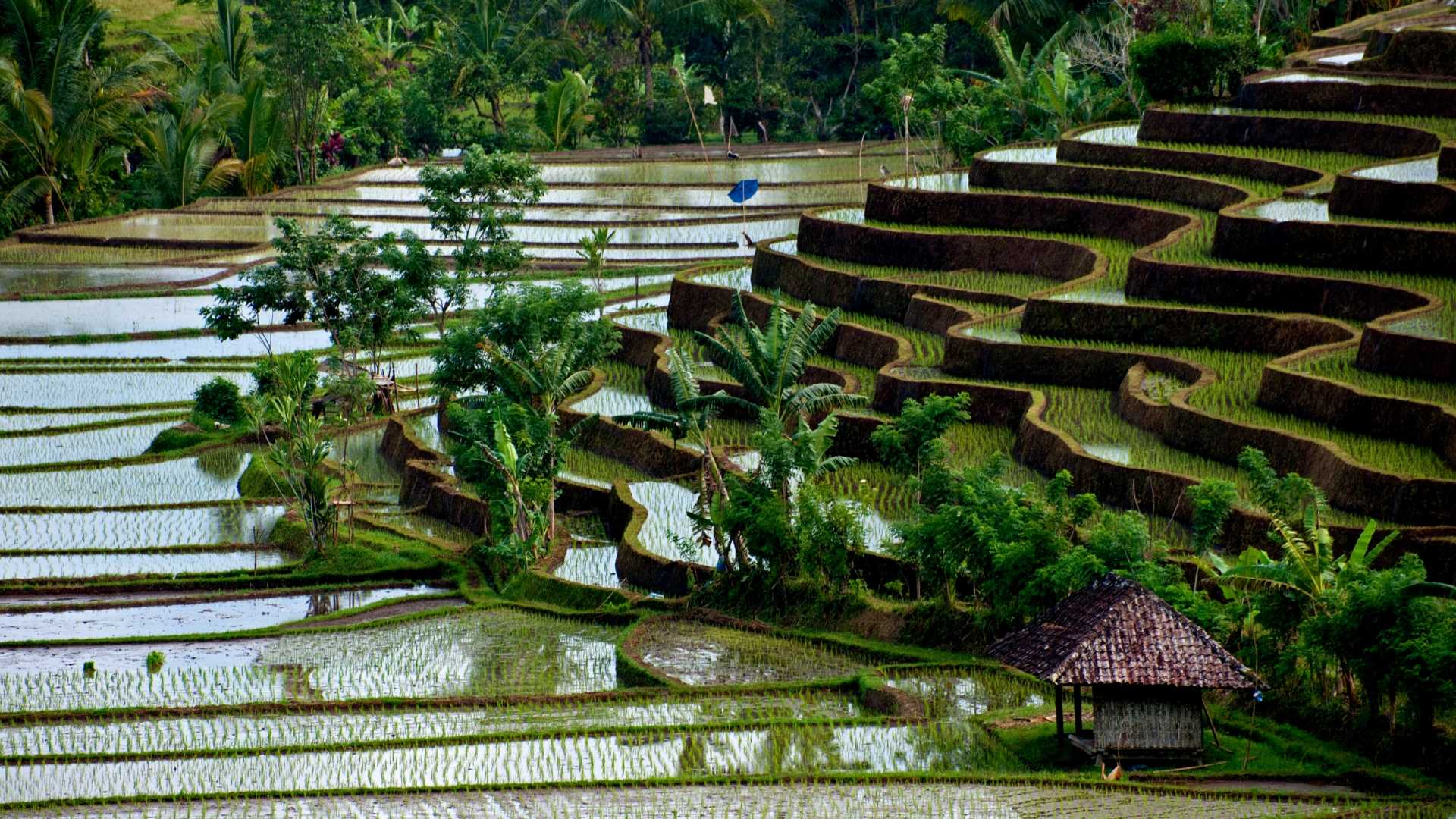 But the secret to its longevity goes far deeper.

Subak is a word that describes the complex water management system that keeps the rice paddies productive - but it also means a cooperative approach to organising society, and the economy that doesn’t rely on the “top-down” approach that’s so common elsewhere.

Instead of relying on orders coming down from people at the top, the subak farmers organise themselves, managed in communities involved in planning out and managing, organising settlements, conducting religious ceremonies and keeping everything orderly and running smoothly every year.

The guiding principle behind subak is adherence to the ways of Tri Hita Karana - something between a religion and a cosmological philosophy that says that the human world, the spiritual world and the natural landscape can’t and shouldn’t be treated separately.

To live life well, harmony between all three must be found and kept, for the good of everyone.

In this line of thinking, to plunder and exhaust the land’s resources is an attack on human society, and as unthinkable as rebelling against the gods. It mirrors what ecologists and environmentalists are advising elsewhere: as a specific example, if you want to manage water flow and prevent catastrophic flooding in the future, you don’t cut down the forests that filter rainfall and hold the soil in place. Remove one part of the system and the whole falls apart. That’s the essence of Tri Hita Karana.

Under subak, every owner of a sawah (irrigated rice field) gets their fair share of water, fed through canals and weirs from some of Bali’s 150+ streams and rivers - and that same farmer contributes, via a water collective, to the upkeep of the system by which others get their share. The water itself is fed to the fields through water temples, where rituals are held every 105 days, corresponding to the 105-day growing cycle of rice. It’s a neat, self-reinforcing and marvellously effective way of keeping everything running, now and in the future.

In this way, Bali maintains around 49,000 acres of subak field systems, reinforced with dykes of black earth, and using methods that treat Nature as an equal partner in agricultural enterprise, home and religious life. 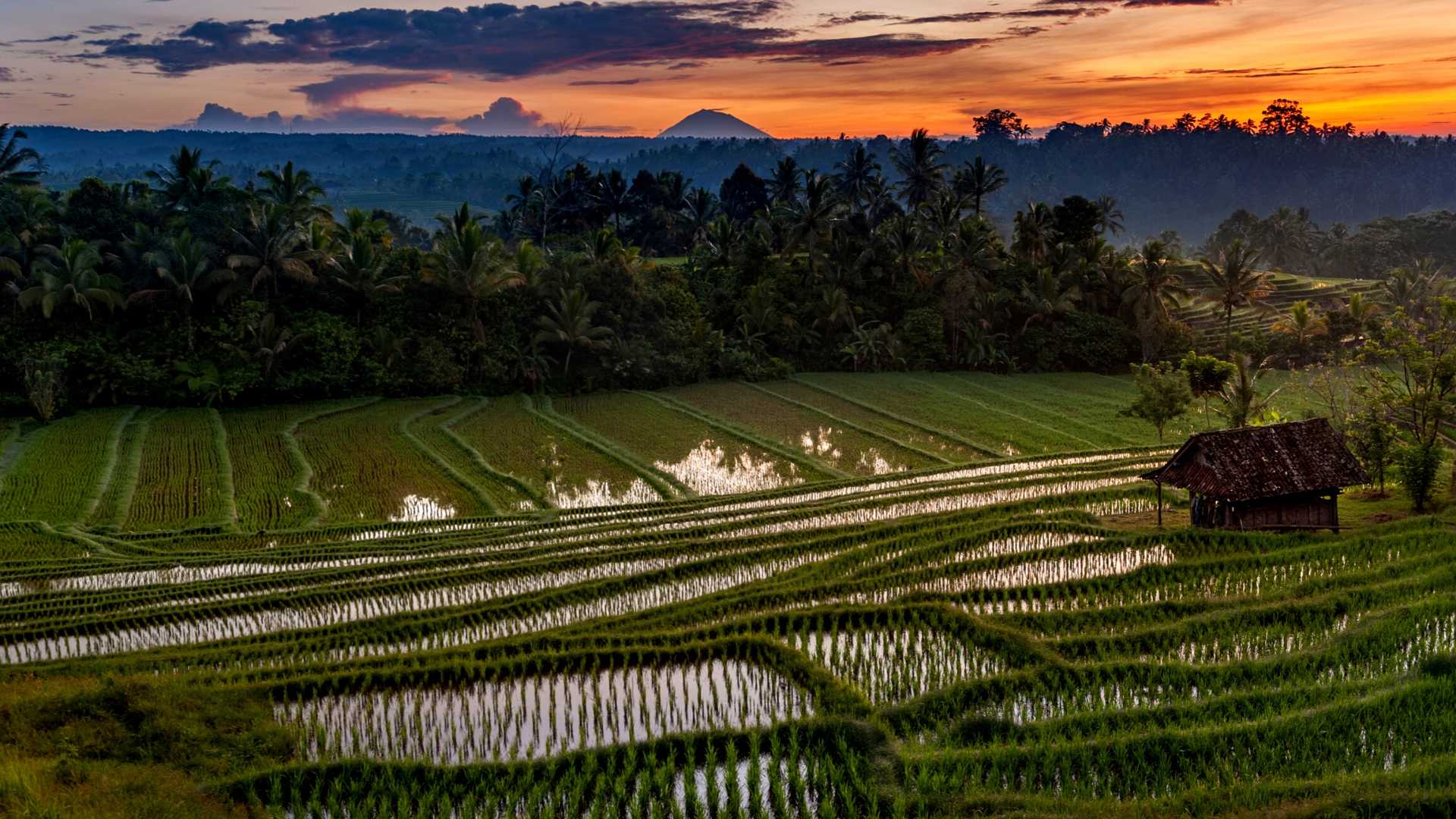 Sunset over rice terraces in Bali

Until relatively recently, this was giving Bali all the rice it needed - but rising demand meant that by the 1960s, the island had to start importing some of it. Then along came IR36, a tough, disease-resistant strain of rice introduced in 1969 with a growing cycle of around a hundred days (previously, it took half a year to produce the crop).

However, if you can find it, try the traditional, slower-growing and tastier variety, padi bali. It’s what the island’s residents usually prefer, so with a bit of luck, they’ll be keen to convert you to its charms.

It’s certainly worth trying. After all, they’ve spent a thousand years perfecting it.