Full Of Eastern Promise And Made Everywhere Else, Turkish Delight is The (Sugar) Bomb

Growing up as a kid in Britain, I knew there was some candy I just shouldn't have.

Boiled sweets were fine, as are sticks of rock, toffee, fudge or bags of Jelly Babies. Chocolate was a little fancier - and much harder on a vanishingly small budget of weekly pocket-money - but it was definitely permitted, opening up a whole realm of chocolate-covered gastronomic adventure.

If I was tall enough to reach it off the counter at my local newsagent, I figured it was probably designed for little sticky fingers like my own.

But then there was Fry's Turkish Delight. 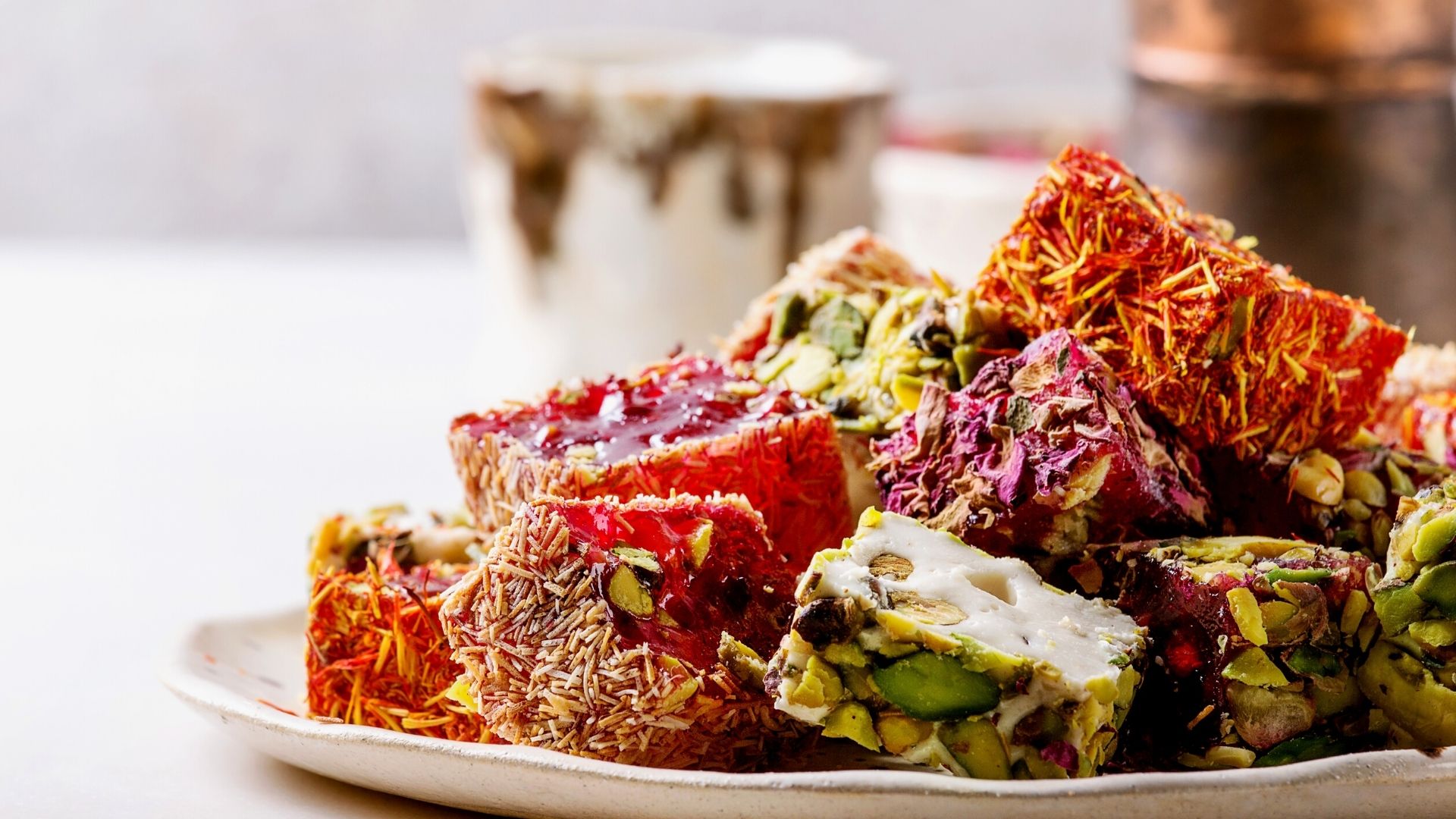 A variety of Turkish Delight

It was in a disappointingly small purple wrapper, for one thing, and as a kid, you're used to big bright primary colours jostling for your attention and yelling "hooray, sugary fun!" Yet here was purple, the colour of crushed velvet, Roman Catholic bishops, royalty and magic. A grown-up colour.

I knew about this sweet's existence from its appearance in the children's book The Lion, The Witch And The Wardrobe (when the film was released in 2005, sales of Turkish Delight spiked in the UK) but in that fable, it was used by a witch to encourage someone to betray his friends - and that made it sound dangerous.

But then one day I illicitly got the chance to try what was wrapped inside. And it was - confusing. The chocolate on the outside was good, but what on earth was this chewy, pillowy, slightly rubbery stuff in the middle that tasted of flowers?

To a modern palate accustomed to immediately powerful dessert flavours, Turkish Delight can seem a bit strange. The mouth-feel is somewhere between a square of uncooked Jell-O and a lump of dissolving taffy.

It's weird and at first it doesn't seem like it's going to go anywhere - but then the sugar hits your tastebuds properly, and your brain goes the other way. Ack, this is so sweet. How do people eat a lot of this thing?

The answer is, they don't. Turkish Delight is the whisky of the sweet world. You take just a little, it lasts you a surprisingly long time, you're enjoying the taste long after you popped it in your mouth - and after that, unless you have the sweetest of tooths, you're totally done.

They only call it Turkish Delight in Turkey, though. If you're taking a tour through the Greek islands you'll find (as I did during my time there) that powder-dusted cubes of Delight appear at the end of a good meal, along with Greek coffee and squares of baklava dripping with oil and honey - and the name isn't what you expect. 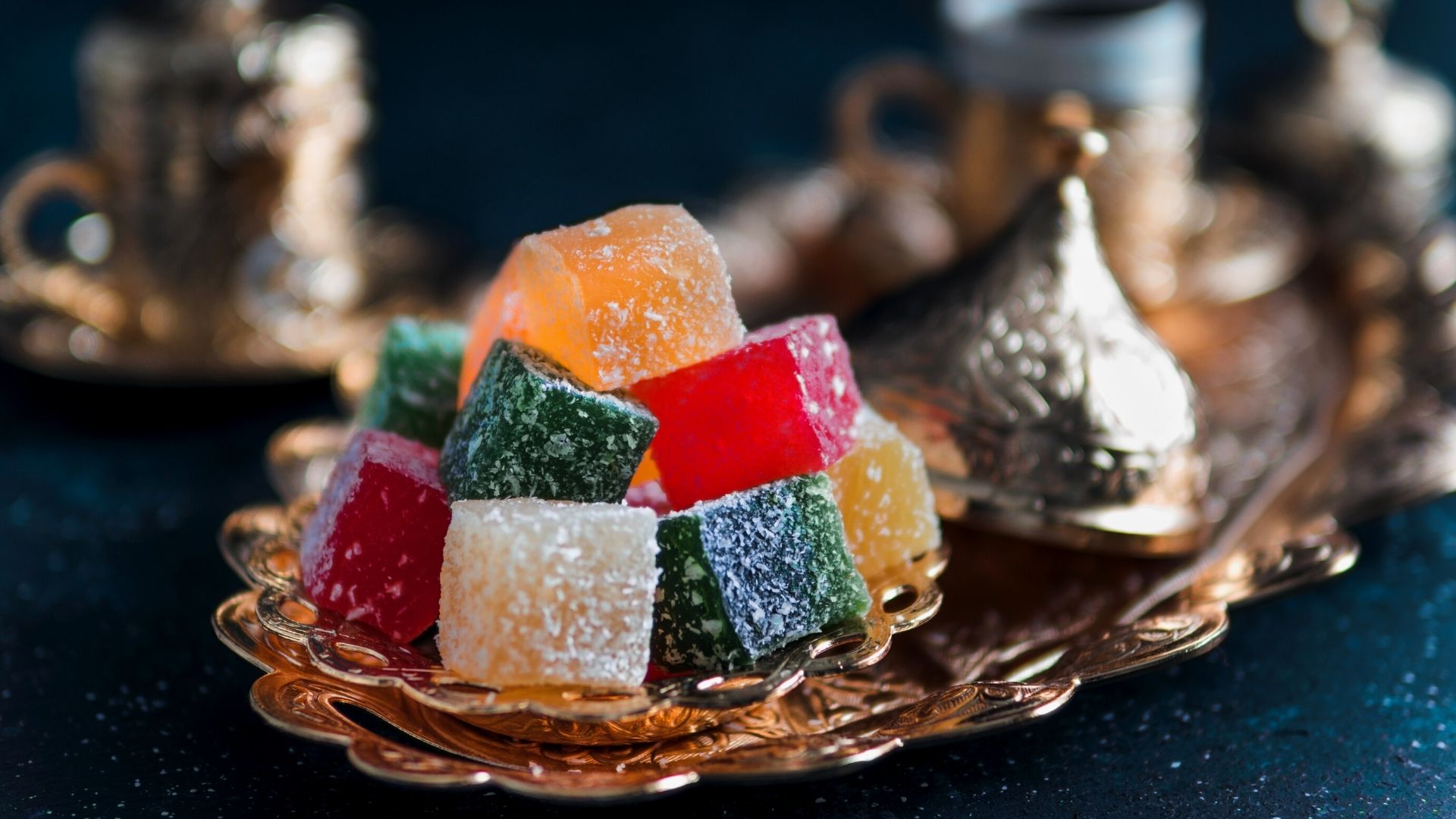 The whisky of the sweet world

"Is this Turkish Delight?" I said innocently, not having yet learned how far up Greek eyebrows can go when their Mediterranean neighbour is mentioned.

"NO. You are WRONG, sir," the waiter said alarmingly loudly. "NOT Turkish. This is GREEK Delight."

Unlike other popular foodstuffs in the EU, Turkish Delight doesn't have Geographic Origin legislation attached to it, policing where it can or can't be made. This might be because it's way, way too late to apply it.

Outside of Greece and Turkey, you'll find Delight in much of the Arab world under a variety of names - in Egypt, in Cyprus, in Armenia, in Bosnia & Herzegovina, in Israel, in Romania and even in Brazil. In almost every case, it won't be called Turkish Delight - because, why would it? What has Turkey to do with it?

If you're Turkish, the answer is "everything!" A Turkish Delight maker in Constantinople has the earliest formal claim on the recipe, dating back to 1777 - but historians have pointed towards very similar concoctions in Arab and Persian cuisine that predate it by centuries.

Nevertheless, if you're in Turkey for any length of time, you'll hear it comes from Turkey, no question about it - and you should probably keep to yourself that the only place these days it's legally protected as a name is Cyprus.

The word for it in Turkish is lokum - which points towards earlier Arabic origins, since there it's called rahat al-hulqum ("throat comfort"). Greece borrowed the Arab-Turkish roots to make it loukoumi, while Romania…

Okay, this case is a little more complicated. There, it's called rahat, from that same root-phrase - but since relations between Romanians and Turks were strained for centuries due to the latter occupying the former's country (Romania finally declared independence from the Ottomans in 1878), many Turkish words were saddled with ironic or outright rude meanings when adapted for  everyday Romanian.

So yes, rahat is the Romanian word for Turkish Delight - but far less delightfully, it also means "crap".

(Do be careful of what you order in a Romanian cafe.) 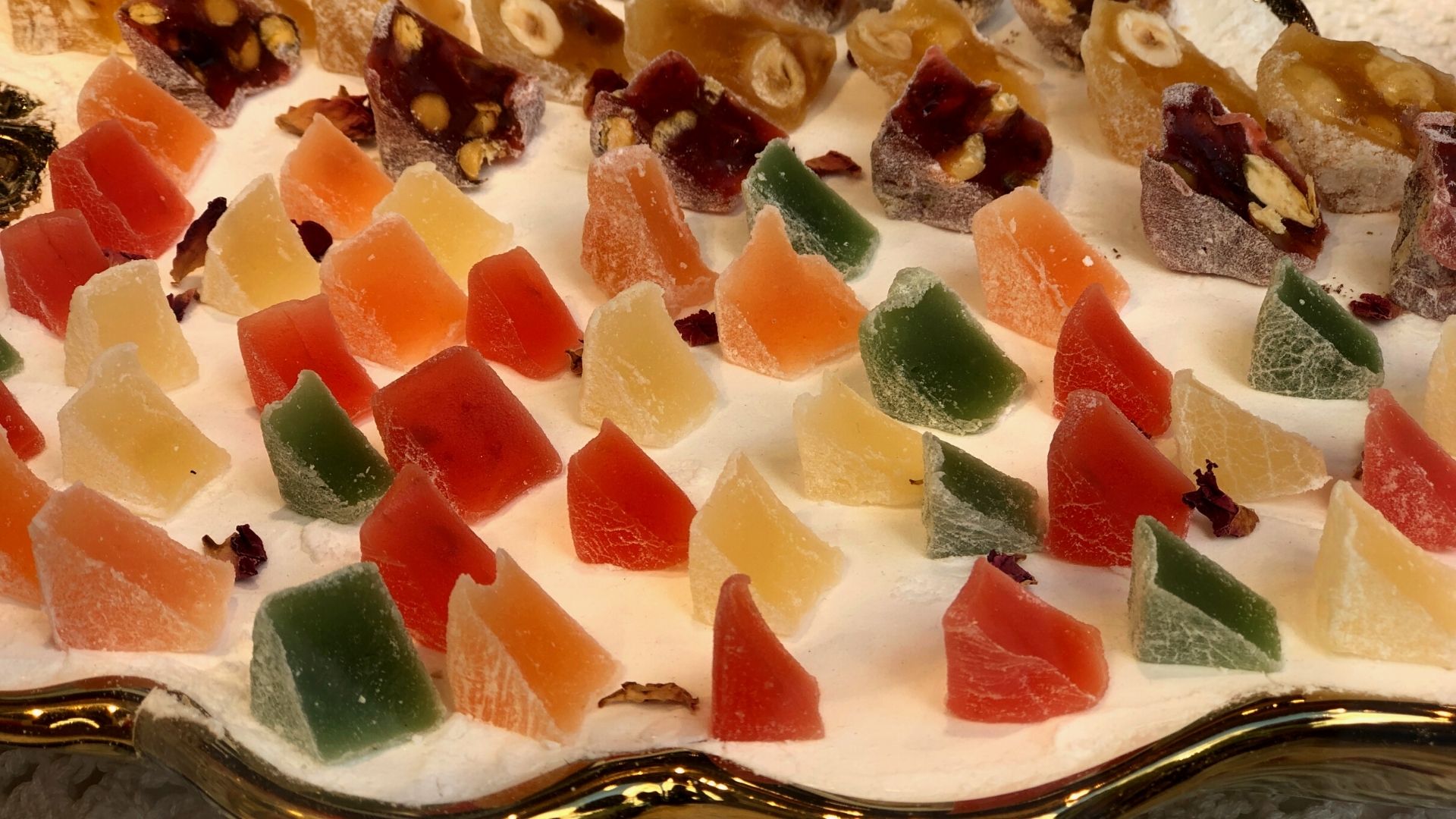 What English people like me consider to be Turkish Delight is very different from the type you'll get in an Istanbul coffeehouse. Started in 1914 by a company that merged with Cadburys in 1919, Fry's Turkish Delight is more a chocolate bar than anything else - and the middle only comes in one flavour, rose.

As of 2010 it left Britain to be manufactured in Eastern Europe - but it's still sticking to the original recipe, using the slower cornflower and sugar syrup boiling process instead of hurrying it along with gelatin, which would make it unsuitable for vegetarians.

Mainly, though, it's just sugar. It's an absolute sugar bomb, and no matter what's added (nuts are popular in the Mediterranean; bergamot, lemon, mastic, dates, anything sweet) and no matter what it's dusted with to stop it sticking to your fingers, when it melts on your tongue, it's a lot to deal with.

If strong black coffee is your chosen beverage, you should find its bitterness offsets the ridiculously sweet aftertaste of whatever Delight you're sampling - hence the popularity of the two together, along with a glass of water to bring down the intensity of either as needed.

However and wherever you encounter it, and whatever it's called when you do, please do try it when you see it on your travels. You're absolutely allowed (trust me, I'm an adult now) and there's no other delicacy quite like it. A true Delight.